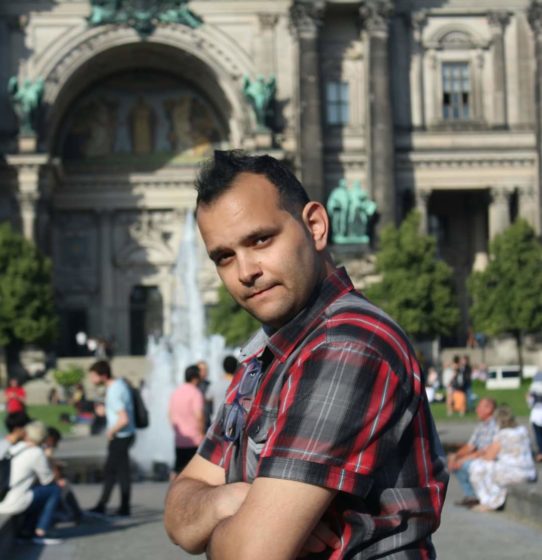 Rami Abusaleh (31) arrived in the Netherlands as a refugee in 2014, stateless and alone. He has since got married, become a Dutch national, and is beginning to heal from the trauma of living with conflict and oppression in his home country of Syria. A Master’s student in comparative literature at the University of Amsterdam, Rami dreams one day of having his own educational centre for cultural analysis. He is currently seeking work.

How did you end up in the Netherlands?
After a long journey of asylum-seeking from Syria to Malaysia, and then to Brazil, I arrived in the Netherlands. I left Syria during crisis and war and I tried to find a better life in Malaysia, but I couldn’t because it was hard for me to find a job. I got a student visa for one year there. After that, I found a way to Brazil to seek asylum, but the government didn’t offer any support – just papers. After nine days in Brazil, I managed to get on a flight to Malaysia with a European transit in Amsterdam, where I sought asylum.

How do you describe yourself – an expat, lovepat, immigrant, international etc?
All of them, I think. And we can add ‘refugee’ also. Everything adds something to your personality. Wherever you go, you take something from there. I’m semi-Dutch, semi-refugee. I was born in Syria, but my father was born in Palestine, so when I came to the Netherlands, I felt like I was a refugee for the second time. Before the war, there were more than 500,000 Palestinian refugees in Syria.

How long do you plan to stay?
As long as I can. I was once stateless. Now I’m Dutch and I’m happy here. I have a family. I met a girl here and we are married now and I have a good life here and I hope that I find my way.

Do you speak Dutch and how did you learn?
Yes, I speak Dutch very well – I think. I learnt at a Dutch language school as a part of the integration process. I think that, for anyone who speaks English, it’s easy to learn Dutch. Maybe it’s hard to speak, but you can understand many words from English.

What’s your favourite Dutch thing?
I have many favourite Dutch things, but I think maybe gouda cheese! I live in Woerden, close to Gouda, and we have many shops here that make it themselves and it’s delicious. Sometimes I make a mix between Dutch and Syrian cuisine. I have my own original recipes! Take any dish in the world and add potatoes to it and you have a Dutch dish!

How Dutch have you become?
Quite Dutch I think – to the extent that I can hear the alarm the first Monday in every month without any fear, and just ignore it. When I came to the Netherlands, it was horrible to hear that sound and see that Dutch people, they don’t care about it at all. When you come from a war zone and you hear an alarm and you see nonchalance… But now I hear it and there is no fear at all.

Which three Dutch people (dead or alive) would you most like to meet?
First, Mieke Bal. She is a professor at our university and the co-founder of the Amsterdam School for Cultural Analysis. She has written many books and I am influenced by her theoretical writing. If I met her, I would ask her to be my supervisor for a PhD programme, maybe!

Next, Anthoni van Leeuwenhoek. He was the father of microbiology. He was one of the pioneers in inventing microscopes. I would like to meet him in this time of corona crisis because his invention changed the world.

The next person is Vincent van Gogh. I’d like to meet him and see how he was drawing and making his paintings. I’d ask him: ‘Could you please make a picture for me?’

What’s your top tourist tip?
Actually, I don’t do much tourism here in the Netherlands; I go abroad every year. But I can recommend my city: Woerden. It’s very nice but nobody comes – I don’t know why! It’s really amazing landscapes and lots of canals and rivers, and we have many parks here with swans, geese and ducks. We also have a castle and cheese factories and galleries. There is also an annual cow market in October.

Tell us something surprising you’ve found out about the Netherlands
Here’s something funny. When I first came here, in 2014, immigration officials would call me, my friends, and maybe five or six other people, ‘Meneer’. It was surprising for us as ‘Muneer’ is a man’s name in Arabic! ‘Why are we all Muneers?’ we wondered! It was a matter of misunderstanding.

But the most important difference between here and Syria is the mentality of the people. When you talk to anybody here, they are always smiling and calm. In my country, it’s easy to be angry or use a loud voice. But here it’s different. I’ve met many Dutch people, who if they are really angry, don’t raise their voices at all. In Syria, there’s been 40 years of oppression and dictatorship. Nobody is allowed to say anything, so you are afraid of anyone in the street, and you are always aware and ready to have a fight or quarrel.

If you had just 24 hours left in the Netherlands, what would you do?
I would stop time and stay forever in the last 24 hours here. That’s the truth, because I cannot go back anywhere. If you are going voluntarily, it differs from being deported or something else. So, for me, this answer has many dimensions.

Rami is currently seeking work in the field of culture and literature, teaching and translation. You can find out more about his professional background and contact him here.

Rami was talking to Deborah Nicholls-Lee.