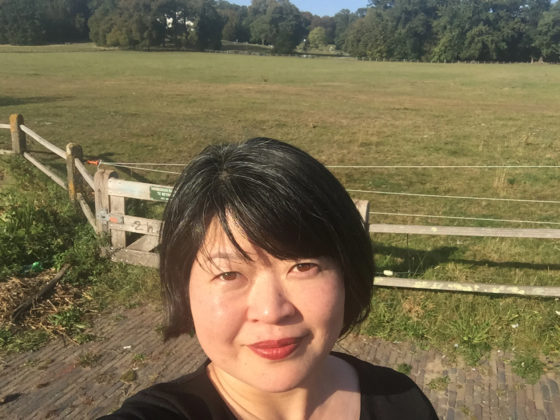 Miyuki Okuyama grew up in Yamagata, Japan and works as a professional photographer. Her latest exhibition, Foto-opdracht Nightfall, is currently underway in her new home town, at the Museum Arnhem.

How did you end up in the Netherlands?
I came to Holland to do an artist in residence and work on an exhibition. I’m still here. I met my husband, who is also an artist, in Arnhem. That was 18 or 19 years ago already. We got married later on, and we’re still together.

How do you describe yourself – an expat, lovepat, immigrant, international etc
I think international might be the best, because I work here mostly, but if there was no coronavirus, I would go home a couple of times a year to visit my family, do research, and for exhibition purposes. I also go to other countries for my photo projects.

I was in Mauritania for four months before coronavirus became serious. I had wanted to go to Ethiopia, but I will have to wait. I’m one of the visiting artists for an international photo festival in Ethiopia, but it’s been cancelled and postponed for one year. It will happen, hopefully, next year.

How long do you plan to stay?
I’m settled down here and married, so let’s say I’m definitely going to be here for another 20 years. When I reach retirement age, I might consider moving to Japan. I don’t know yet. It’s a possibility. I will need to take care of my parents when they’re in their 80s or so. I will see.

Do you speak Dutch and how did you learn?
I do speak some basic Dutch, yes. When I migrated here, it was very strict for immigrants. Everyone had to take a Dutch course. It was mandatory, so I had to learn. It was for one year, two evenings every week.

How Dutch have you become?
I don’t know, maybe not much. Living here for so long does not necessarily mean I’m becoming Dutch. I still consider myself Japanese. I do cycle, but I don’t like Dutch food. I often cook Asian food. Dutch food, like stamppot, is good for winter. In summer, maybe something else. I’m not very Dutch yet. I’m doubting if I will ever become Dutch.

Which three Dutch people (dead or alive) would you most like to meet?
Jan Joosten van Lodensteijn. He was a figure in the 16th century and a navigator for the Dutch East India Company. By accident, during a storm, he arrived in Japan in the year 1600. I would be very curious to meet this man and ask how his life was in Japan.

Hieronymus Bosch. He was an artist in the 15th century. His paintings are really, really bizarre and unique. It would be very interesting to visit him in his atelier (studio) and see how he works and what his inspirations are.

Jan Voerman. He was a painter from the 19th century. He’s an ancestor of my husband, who is also an artist. He often painted very typical Dutch landscapes; very flat, big sky, cows, and different kinds of clouds. I’d like to see how he works as a painter.

What’s your top tourist tip?
I would suggest taking an NS train, renting a bicycle, and cycling around the countryside to see real Dutch landscapes like canals, meadows, cows or sheep, and windmills. That’s what I like to do myself; riding a bicycle outside of a city and enjoying beautiful weather.

Tell us something surprising you’ve found out about the Netherlands
Do you know about these naked cyclists? It’s an event. Have you seen it? I was new here, and we were driving outside of Arnhem in a forest area when we saw 30 or 40 people on bicycles and they were naked. I was really surprised. It was the annual naked bike ride. They choose different cities for each one.

The nudity here was very surprising. Nudity is positive, it’s liberal, but I wouldn’t do it myself. The first time I went to a sauna, it was mixed and everyone was naked. That was quite a surprise.

If you had just 24 hours left in the Netherlands, what would you do?
I thought about this. The first thing I would like to do is go to Zeist. It’s a city near Utrecht. There’s an organisation called De Ezelsociëteit, the Donkey Society. They rescue working donkeys from other countries, mainly from Eastern Europe, and take care of them. I love donkeys. They are my favourite animal.

A couple of donkeys came to our wedding here in Arnhem, so I would want to visit the donkeys there. My husband made a donation so he could borrow two friendly donkeys. They were brought in a truck, and they were a surprise for me. We were called to go outside the venue and there was grassland where the donkeys could spend the afternoon. That was a nice present from my husband because I’m crazy about donkeys.

I would also want to go to Maastricht and visit the Basilica of Our Lady. It’s a very beautiful chapel from the Middle Ages with a very dark atmosphere and hundreds of candles and a statue of Mary. The last thing would be to spend the rest of the day with my husband cycling in the countryside and have a picnic under the clouds.

Tickets and additional information about Miyuki’s photo exhibit at Museum Arnhem can be found here. It continues now through 18 October. You can also learn more about her work on her website.