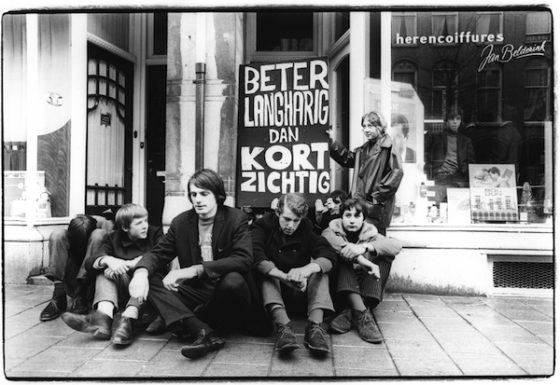 May 25 marks 55 years ago to the day when a couple of students got together to shake a nodding Dutch society out of its complacency. During its short existence – it only lasted two years – Provo, as the movement was dubbed, paved the way for the sexual revolution, the emancipation of women and gays, the peace movement, and brought about a greater awareness of the threats to the environment. Plus a couple of completely mad things. Here are some of the people and events that marked the era, and some it gave rise to.

Roel van Duijn
Roel van Duijn was one of the founders of Provo. His political manifesto ‘Barst!’ (which means both ‘crack’ and ‘get lost’ in Dutch) consisted of a single sentence: Revolution and destruction of the state, the army and the police and the replacement of the civil service by a federation of revolutionary committees.’

The proletariat had bought into capitalism, Van Duijn said, and the revolution had to come from the  ‘provotariate’, i.e students, artists and other free spirits. When it didn’t happen, Van Duijn sank into a depression but emerged to found the environmentally inspired movement the Kabouters (the dwarfs). He also tried his hand at regular politics and is now an agony uncle for people unhappy in love.

Robert Jasper Grootveld
Definitely the madcap of the movement and one that frequently got Provo into the international headlines. His speciality was organising so-called ‘happenings’ on Spui square in the centre of Amsterdam, butt of Grootveld’s anti-smoking protest because of the ‘Het lieverdje’ street urchin statue which was paid for by the tobacco industry. His white bike plan – free bikes for everyone to use – was launched there as well as many others. 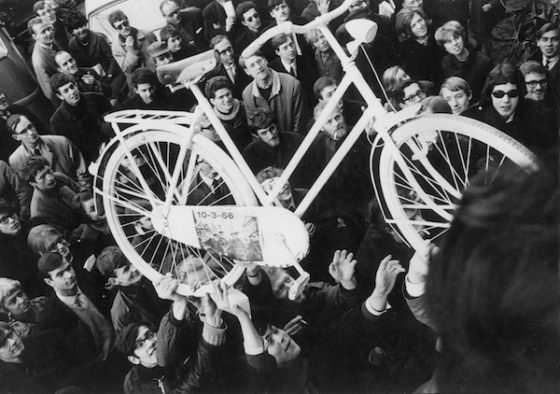 Hole in the head Huges
An example of the madness that was also part of Provo was the skull drilling experiment of medical student Bart Huges, a friend of Grootveld. A long-time user of LSD, Huges thought a hole in the head would make him permanently high and in the presence of photographer Cor Jaring he proceeded to put a dentist’s drill to his head which he operated with his foot. He said his ‘third eye’ made him feel like his 14 year-old self. Huges was eventually taken away by the men in white and kept under observation for three weeks.  Jaring made a fortune with his pictures.

Royal wedding
One of the events Provo latched onto was the marriage of former queen Beatrix to German diplomat Claus von Amsberg on March 10 1966, dubbed ‘anarchy day’ by the movement. Provo was staunchly republican and World War II was not that long ago. The couple had preferred not to get hitched in the rowdy capital but Amsterdam local council insisted, as did queen Juliana.

Despite rumours spread by the movement of feeding sugar cubes laced with LSD to the horses of the royal carriage, all that happened was a smoke bomb which temporarily obscured the couple from view. It was enough, however, and the images went global.

Election
‘Long-haired workshy louts’ is among the friendlier epithets the Provos were given by the establishment. But the Provo way of showing up the authorities gained support and in June of 1966 Provo gained a seat on Amsterdam local council. Not everyone was happy. Provo was clearly in danger of becoming part of the establishment. On May 13 1967 the movement was disbanded during a happening at the Vondelpark in Amsterdam. 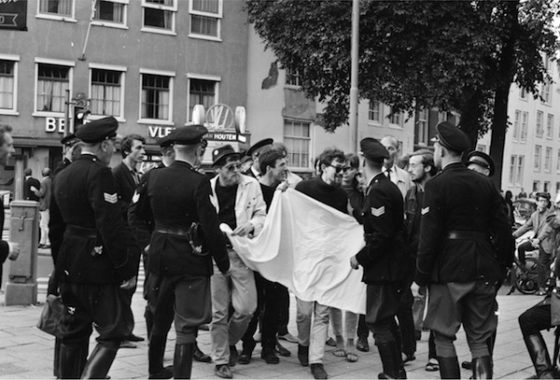 First naked woman on tv
A direct result of the sense of freedom that swept the country was the appearance of – shock, horror – the first fully naked woman on Dutch television in October 1967. Her name was Phil Bloom and the title of the VPRO programme was Hoepla! A naked Bloom reading a newspaper comment about an earlier appearance on the show covered in flowers, lowers the paper as a phone number appears on the  screen for VPRO member to cancel their subscription as she reveals all. Many dialled it immediately.

Maagdenhuisbezetting
Provo had come to an end but gave rise to many other landmark events, and by that time students everywhere and most notably in Paris were rebelling against the authorities. The revolution started, not at Amsterdam but Tilburg university where students protested against their lack of ‘inspraak’ or say in matters that concerned them.

It was followed by the much-publicised occupation of the Maagdenhuis, the university citadel in the capital. They stuck it out for five days and were then forcibly removed.  The actions did result in a more democratic structure, with elected university councils.

Dolle Mina
Women didn’t get much of a look in with the Provo boys or at the Maagdenhuis where they were reportedly mainly employed as sandwich makers and typists, and they didn’t like it. Women’s movement Dolle Mina came into being soon after. In 1970 Dolle Mina members occupied the  Business School at Kasteel Nijenrode, a male bastion out of bounds for women. 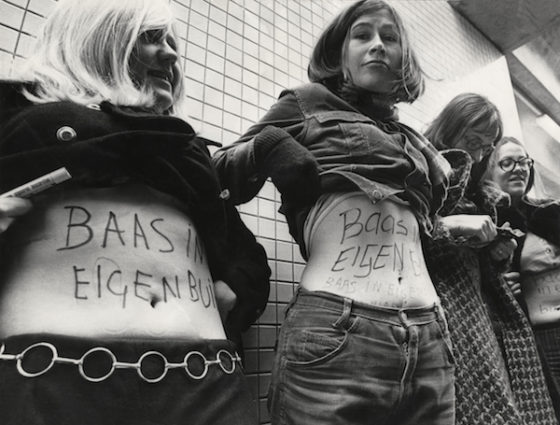 Contrary to what is commonly believed, the Dolle Minas never burned their bras. They did campaign to be ‘baas in eigen buik’ i.e. to have  the right to decide to have an abortion – which resulted in abortion legislation. The movement later became divided and other feminist groups had taken its place by the mid-1970s.

The coronation
It must have given the royal family nightmares when Amsterdam was once again the scene of an important event: the coronation of princess Beatrix on April 30, 1980. In the previous ten years, the lack of affordable homes had resulted in the squatters movement and in the run up to the coronation the military police had removed squatters from a house in the Vondelstraat.

This had resulted in a violent clash with activists. Tensions were high and the coronation became a focus, with ‘geen woning, geen kroning’ (no home, no coronation) as the slogan of the day. A day of organised rioting followed.

Ten thousand policemen, troops and military police were drafted in on the day to make sure the coronation could go ahead. Talk to any even vaguely alternative Amsterdammer over the age of 50 and they will all tell you they were there.