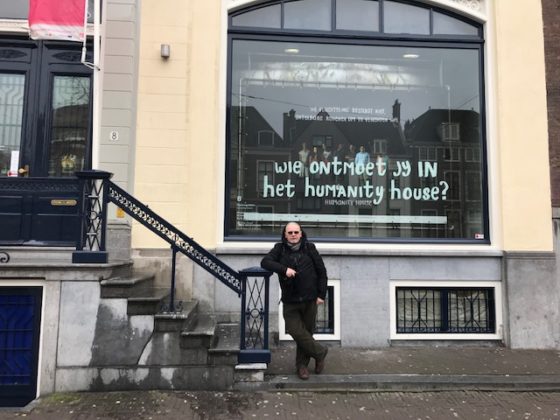 Larry Gardiner was born in London and first visited the Netherlands in 1972. He has been back many times since and currently describes himself as a ‘Brexit vluchteling’ (Brexit refugee). He finally left the UK and moved to Almelo with his partner in 2019.

How did you end up in the Netherlands?
My family has had a long relationship with the Netherlands and with Netherlanders. My youngest sister married a Dutchman. Her children and grandchildren have a central place in a growing Dutch family, which of course includes all the various in-laws and their children too. A couple of years ago, my nephews hosted a family gathering in the Netherlands, and I counted fifty or so members on that occasion.

I have been visiting the Netherlands for more than fifty years. I also lived and worked here for a few years, including a spell in a sort of commune called a Centraal Wonen. I have lived in Dordrecht, Amersfoort and, since May of 2019, I’ve lived with my partner in Almelo. She is Hungarian and wasn’t eligible for residency in the UK. She had to go, so I went with her and we came here.

How do you describe yourself – an expat, lovepat, immigrant, international, etc.?
I’m probably all of those. [laughs] I came here because I love my partner. My orientation is also as an international citizen. This is in my culture and heritage. Although born in London myself, my mother was a refugee in the UK from Austria. I grew up knowing that the world was a bigger place and that my family was different. Some of my working life has been spent working in humanitarian projects in developing countries, and so I have lived and worked in many other places before settling here. Being a stranger in a strange land is not new, but it is always delightfully strange.

How long do you plan to stay?
I am 67 now and my partner is considerably younger. I will stay here until I die, I guess. Not being morbid about it, but I don’t have any special interest in going back to the UK. I can because I’m British. I can go back and forth as much as I want to, but I will apply for Dutch citizenship and a Dutch passport as soon as I am eligible, which is in about three years time.

Do you speak Dutch and how did you learn?
Yes, and I learned from children. When my sister’s children were very small, I used to take them to school while I was staying in the Netherlands or pick them up afterwards and keep them occupied until their parents got home. So the first Dutch I learned was ‘Playground Dutch’.

Eventually, I went to a language institute in Vught. It cost a fortune, but I took some classes and I got a certificate. I can currently speak at level B1 and read and write at level B2 in the European reference system for language learning. Some of my time now is spent supporting Dutch lessons being taught with refugees in a Dutch asylum centre near where I live. Teaching is also a fine way to learn. Essentially, I am part of a program where I am both a teacher and a learner. I also volunteer my time at a local food bank, which provides plenty of exposure to native Twents speakers, too.

What’s your favourite Dutch thing?
Raw herring. I really like the freshness of it, but it is an acquired taste. You either love it or you hate it. Dutch food is often plain and quick and easy to prepare. I call it working class food, but what I mean by that is that it’s energy food. Lots of cheese, lots of potatoes, lots of cabbage. It’s all stuff that will keep you going. Throughout the history of the Netherlands, for hundreds of years, people ate very plain but very nutritious energy food.

That hasn’t really changed, but now everything is fried, and I don’t like those things. I prefer single pan dishes like hutspot. It’s plain, it’s nutritious, and it’s good for you.

How Dutch have you become?
The Netherlands has quite an advanced social settlement. They fight and squabble over it all the time, they call each other names, and they have a ridiculous parliamentary system. They also have a constitution that says everybody who finds themselves in the Netherlands will be treated equally regardless of race, gender, and so on. That means I’ve got a constitutional right to be me, and what I like about the Dutch is that everybody is themselves and quite happy to accommodate each other.

Coming from a country that has a schism split right down the middle, I like this. I guess I’m Dutch in the sense that I like all of this very much. I have liberal values, and I believe in honesty. I am happy here, and I like the Dutch way of life. I cycle almost everywhere. I enjoy the outdoors, and I delight in cultural pursuits. Being more Dutch is something I quite happily aspire to.

Which three Dutch people (dead or alive) would you most like to meet?
Hieronymus Bosch. What amazes me about humanity is what our minds are capable of. We can write symphonies and poetry and create infrastructure for high densities of people within a small landscape. We’re even capable of keeping the North Sea in the North Sea for 400 years…well, except for 1953. Bosch had a mind that I would have loved to have had a conversation with. It shines out through his paintings. He painted about the lustful life, and he was a sensualist, but he also did horror scenarios. He painted what it was like to be in the skull of a madman.

Corrie ten Boom. She was a Second World War heroine. What intrigues me about her is that she was a humanitarian, she was courageous, she was idealistic, she was selfless, and she had a heart full of compassion. Those are all admirable qualities we aspire to, but none of us generally get there. She was also a pragmatist, a leader, and a feminist at a time when that was rare, even in this country.

Suze Groeneweg. A true Dutch pioneer, she was the first woman elected to parliament, and the first to be awarded the Order of the Netherlands Lion. She started from outside the system and actually became a national treasure. She met with world leaders and had an influence on them in her own small way.

What’s your top tourist tip?
It depends on the person. Back when I had a business here, I would meet with customers who would come to the Netherlands and only have one free day available. If they had children with them, I would take them and their family to Madurodam where they could walk around the entire country in a single afternoon and have ice cream at the end it.

But for those who have more time, I would say that they should learn more about the history of the Netherlands. A good place to do that is the Zuiderzeemuseum in Enkhuizen. What they’ve done is taken things from places that flooded, taken them apart, and re-erected them brick by numbered brick. So you can see how the Dutch have kept the North Sea in the North Sea and the windmills that pumped the water out of the polders.

I’m a dad, and I was also a foster father. We would go there when they were children because they could run around, get dressed up in Dutch clothes and clogs, and learn about how cheese is made and how the Netherlands became what it is through several hundred years of history.

Tell us something surprising you’ve found out about the Netherlands
I’m endlessly surprised at Dutch people’s kindness. I don’t live in the big cities in the west. I live in the east where it’s peaceful and quiet, and the cities are smaller. Life is on a smaller scale and people are endlessly kind.

We got the keys to our current place in July and all our neighbours were at our wedding ceremony in October. We mentioned that we were going to have the ceremony in the town hall, and they were all there. They came uninvited, but they came with gifts, and they came to help. We were still decorating, painting, and putting the furniture together when they arrived.

If you had just 24 hours left in the Netherlands, what would you do?
I would go to the North Sea coast. I would just walk on the sandy beaches. I would probably avoid the touristy bits like Scheveningen and head north. I’d go to Hoorn and Medemblik where you can actually walk along the beach for miles and miles and miles. Maybe I would just go to Haarlem and head north. I’d just walk until it’s time to catch the train to Schiphol.