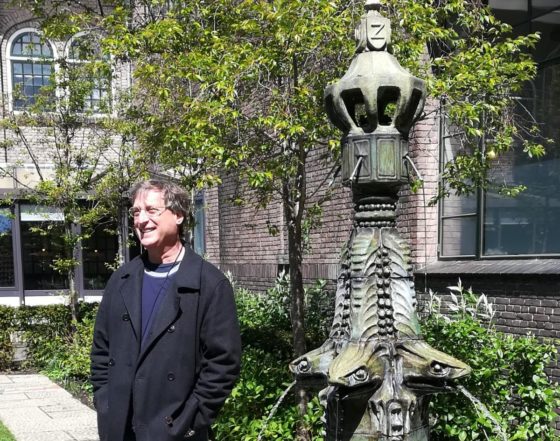 Daniel Loebl grew up in Peru and spent several years in the United States before he moved to Amsterdam with his family. He currently lives in Amstelveen, is working on his second novel, and would love to go get coffee with Rutger Bregman.

How did you end up in the Netherlands?
In 2016, I was living in Madison, Wisconsin with my family. I was offered a job opportunity at a company with offices in Amsterdam. It took me less than a second to say yes. Moving to the Netherlands felt like the right next step for me and my family. It still does. Now I would never think to leave, and I even have my own digital marketing company, NAIAN International.

How do you describe yourself – an expat, lovepat, immigrant, international?
I see myself as an International European. I was raised in Lima, Peru. My family came from Europe to live there, so in a way, I am returning my family to its proper place. My education was centred on European history, art, and values. I have a degree in philosophy and just about every important thinker and artist I’ve studied was European.

Everywhere I go in the Netherlands speaks to me of a thoughtful society that is trying to do the right thing in terms of building a community that is reasonably managed. Sure, nothing is perfect, and there are times when things bubble up, but that will happen everywhere. The question is how the community at large responds to those situations. In the Netherlands, what I’ve seen so far says to me that I am in the right place.

How long do you plan to stay?
The Netherlands is my home now. I would like to become a citizen of the Netherlands and stay here for good. I have found great opportunities here to be creative. I am a writer working on my second novel, and I have my own digital marketing company with clients in at least four countries.

I have friends from countries like Romania, Spain, Italy, France, the UK, Tibet, and Portugal. Of course, there’s the art and the endless number of beautiful places where you can see it and be around it. Even though there aren’t any mountains to speak of, there’s the beach and the forests to explore.

Do you speak Dutch and how did you learn?
I am working on improving my Dutch every day. My main problem is with understanding multiple Dutch accents and Dutch speed talkers, which can lead to some awkward half-conversations. I’ve taken classes, but found them a bit too restrictive. I have a fantastic taal coach at the Amstelveen library, and she helps me work on my Dutch. It is slow going. She has a lot of patience.

Dutch is acknowledged as one of the hardest languages to learn in the entire world. I believe it has something to do with the amount of random memorising you have to do for many important elements of the language.

What’s your favourite Dutch thing?
The thing I notice everywhere I go in the Netherlands is the quality of the light and air. Sometimes, when you are at the beach at sunset or dawn, the entire place looks like it is painted by a master, and I feel transported somewhere else in time in the wind and silence.

And, if you must know, the fact that it rains a lot also means that I’ve seen more rainbows in my time in the Netherlands than at any other time before. So yes, the quality of the air and the light in the Netherlands is my favourite thing.

How Dutch have you become?
I would say I’m kind of Dutch. I have one orange hat and a scarf that I wear on King’s Day. I love the public transportation system with the OV-chipkaart. Most of the time it works like a magic carpet for me. And I know to get out of the way of elderly Dutch ladies looking for discounts at the public markets. I value my life!

Which three Dutch people (dead or alive) would you most like to meet?
Jeroen Krabbé. He is an actor, painter, author, film director and producer, plus many other things I probably don’t know about. I would love to visit a gallery with him that exhibits his paintings and listen to him tell stories about them in Dutch. I think I would be able to understand him most of the time.

C. Escher. His work is fascinating and, if I had the chance to speak to him, I would like to watch him transform whatever he is looking at into one of his compositions while listening to him talk me through his thinking as he works.

Rutger Bregman. He is an economist, the author of Utopia for Realists, and a clear thinker and good researcher who can bring complex ideas to life. I think it would be a great afternoon to have some time to listen to him discuss his ideas for transforming the present economic arrangements into a future that would take into account the dignity of the people living in society. I’ll buy the coffee and appeltaart if he is willing to meet.

What’s your top tourist tip?
Go to Marken and spend some time by the lighthouse. I biked there with some friends and found the entire trip to be a great experience. Marken’s lighthouse was a great and mysterious destination surrounded as it was half-covered by a thick mist that cleared as we rested during the late morning.

Tell us something surprising you’ve found out about the Netherlands.
The Uitmarkt, the yearly ‘opening salvo’ of the cultural season. First, that there is a cultural season in the entire country that includes all the arts, even the strange things that pop up in the fringe theatre, and second that it is well attended by everyone, not just tourists.

If you had just 24 hours left in the Netherlands, what would you do?
I would spend it in the dunes somewhere, feeling the wind and watching the North Sea from dawn to dusk.