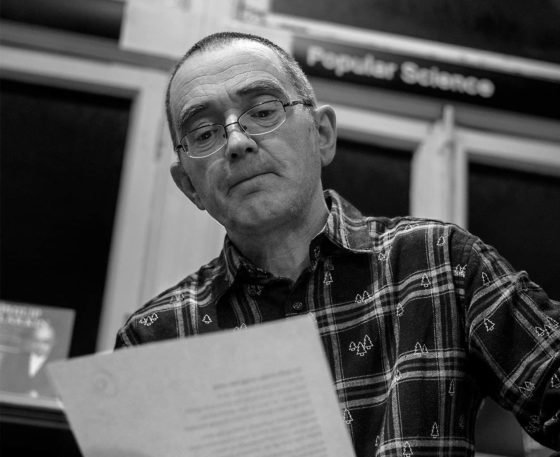 Originally from the United Kingdom, Tim Butler moved to the Netherlands because he really liked the art. He thinks Dutch pastries are underrated and knows where you can find better Van Gogh’s than you can see in the Van Gogh museum.


How did you end up in the Netherlands?
It was for Van Gogh that I came here originally. My entrance to Van Gogh was through The Letters of Vincent van Gogh, a collection of 903 which he either sent or received. Whenever you tell people you’re going to Amsterdam, they assume it’s for the sex and drugs, but for me, I moved for the art.

I was working in Waterstones in London, and it was just after 9/11 and I decided I wanted to do something quite big with my life. I got rid of where I was living and all of my possessions and made some money and I figured that when the money ran out I would come back. My first stop was Amsterdam, it was a good place to start.

I’d met my partner here after I’d only been here for a couple of days. That was something neither of use were looking for. And 17 years later, I’m still here.

How do you describe yourself – an expat, lovepat, immigrant, international, etc – and why?
I’m probably a bit of all of those things. It depends on who I am talking to how I would define myself. I always felt that I was not really at home in my home country. England is a strange country to live in. I always felt that I belonged somewhere else. I wanted to be somewhere where I felt I wasn’t answerable to people.

I first worked in Berlin and then I came to the Netherlands in 2003, and I’ve never once been homesick.

How long to plan to stay and why?
I don’t really plan on moving. You can never say never I guess, but I certainly couldn’t see myself going back to the UK. England’s changed and I’ve changed and I don’t think we’d get on very well anymore. I’m married to a Dutch citizen, I pay my taxes here, I’ve got a mortgage here, and I’ve been here for 17 years.

Do you speak Dutch and how did you learn?
Well, I’m not really conversational, I have to say. I did make a huge attempt when I came here, but it’s a difficult language to learn and I tried several different courses and several different methods but I want to speak a language the way I speak my own language. I want to discuss all the complex issues immediately and that is not a great approach.

I like all of the stamppots and the hutspot and all that sort of food as well.

I’m probably a lot more opinionated than I used to be. Or rather that I voice it more than I used to. It’s a bit of loosening up of that straight-laced way that English people are. I’ve loosened up more generally about things.

I think they are occasionally horrified, back home, when I am direct. That’s a thing that I’ve picked up. I like the fact that, in the Netherlands, if you want an opinion, you’re going to get it. As an Englishman, I know that you really have to pry an opinion out of people and even then, they will always give you the polite choice over the truth. But the directness can be a massive coverup for rudeness.

Which three Dutch people (dead or alive) would you most like to meet and why?
Vincent van Gogh, without a doubt. His letters are a magnificent piece of literature for a start and you get a real insight into what drove him and what it was that he wanted to try and do. This idea of the tortured genius who killed himself because he couldn’t cope, it’s only a part of the story really. I was amazed to find that his real reason for wanting to do it at all was because he wanted to console people.

I might even be more interested in meeting Theo van Gogh, Vincent’s brother. Much less of his correspondence survives. I would just like to ask him what it was that made him support Vincent completely and really be out there on a limb, thinking it was worthwhile doing it. He must have had such an eye, and it wasn’t just brotherly love, because Vincent was difficult and very ungrateful most of the time.

And I’d probably like to have a word with some of the people involved in Anne Frank, particularly her mother, Edith Frank. We learn an enormous amount when we read her [Anne’s] diary but we don’t get what other people thought about her. I’m always interested in hearing what we don’t hear. I like the story of the bit players but not just the star.

What is your top tourist tip?
Get out of the Kalverstraat and the Leidsestraat as soon as possible. I say that but my shop, Waterstones, is in the Kalverstraat, so come here first and then get out of Amsterdam. There’s so much more to do here than the tourist thing. Go a bit further afield and go to the Kröller-Müller Museum. It’s got better Van Gogh’s than the Van Gogh Museum. I’ve been urging people to come to see the art because you simply cannot get it if you don’t stand in front of it. You’ve got to actually get there and see the depth of the painting.

Tell us something you found surprising about the Netherlands?
How welcoming it was. If I can be very critical about the Dutch, it’s because they’ve taught me it’s okay to do that. But obviously there’s another side to it and that’s a big part of why I am here. The Dutch have made me feel really at home and welcome and that continues.

The Dutch tolerance thing is slightly more legendary than factual, but it’s a good reputation to have.

If you had just 24 hours left in the Netherlands, what would you do?
Try and find out how I could extend my stay. Otherwise, I’d probably find a bar where I was permitted to smoke, get extremely drunk and write some elegies from my time here.

Tim Butler runs Poetry at Waterstones, a series of events about English-language poets. He was speaking to Molly Quell.