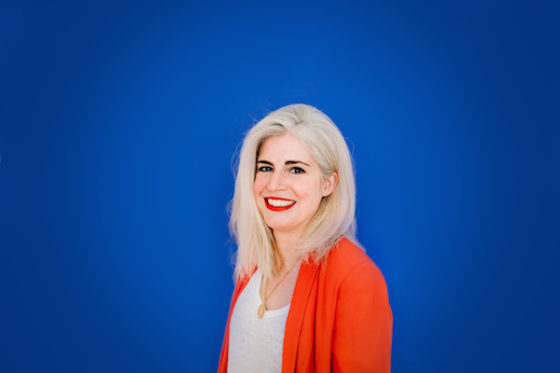 Héloïse Hooton grew up in a French and English household in Carlisle near the Scottish border. She now lives in the Netherlands, owns a PR consultancy firm, and co-directs the event series 5×15 Amsterdam.

How did you end up in the Netherlands
I was living in Paris in 2010 but, despite being half French and bilingual, I didn’t quite gel with the Parisians or the Parisian way of life. It’s a pretty traditional and formal lifestyle. I missed the openness of London, and then all of a sudden a job opportunity came up at the advertising agency Wieden+Kennedy in Amsterdam. I’d never considered living in the Netherlands, but I went to the interview, fell in love with the people, and thought ‘why not?’ I didn’t know anyone in Amsterdam, but I decided to take the leap and here I am, basically, nine years later with my own company.

How do you describe yourself – an expat, lovepat, immigrant, international, etc.?
I see myself as a European – I’m half French and half English. It was really odd when I got to Paris. I thought I’d fit in, but I didn’t. They just saw me as English. Then I went back to the UK and everyone thought I was very French. In either country, I couldn’t fit in. Even while I was growing up there, people typically thought of me as French.

Being in Amsterdam though feels good. It’s an international city, which is why I see myself as a European. At the risk of coming across as idealistic, a European is someone who I think is open-minded, collaborative, and not constrained by nationalism. They’re open to travelling and different cultures. The countries of Europe have been through a lot together. Europeans are trying to get on and be pragmatic about things, support culture and the arts, and be progressive from a human and societal point of view.

How long do you plan to stay?
I have a Dutch partner, and we’re coming up to a year together. I’ve also had my company for five and a half years. So, for the foreseeable future, I’m here, you know? I’ve often wondered if I would ever go back to London, Paris, or another city, but Amsterdam just feels very natural given where it’s situated within Europe. You can go everywhere you want pretty easily. Schiphol is incredible as a hub. I still go to Paris and London a lot, and it’s very easy to get to those cities by train.

I think Amsterdam is where it’s at right now, quite honestly, in terms of liberty, business, and culture. There’s a sense of energy that you don’t really get in many other places and there’s a sense that it’s evolving. It’s not just the same thing over and over again. That’s really exciting.

Do you speak Dutch and how did you learn?
I don’t speak Dutch, I speak ‘Supermarket Dutch.’ I can get by, especially now that I’ve got a Dutch partner. I’ve been spending more time with his family, and it’s definitely on my list of things to do. I want to learn. I’m a linguist, and I did a German and Spanish degree.

I’m a terrible Duolingo student. I don’t think I’ve got the temperament I’d need to really use it. I need to sit down with a human to learn and be put through my paces that way. I’ve also heard about the nuns, the infamous nuns! Maybe that would be a good place to start.

What’s your favourite Dutch thing?
I think it’s autumn in Amsterdam. I’ve never experienced autumn like it in any other city. It’s like they go hand-in-hand together. Autumn makes the buildings look timeless. It’s almost like you’re in a time machine, and you’ve gone back to the 16th century. I often think I wouldn’t be surprised to see witches flying past on their broomsticks. The light at twilight and sunrises, I’ve never seen anything like them anywhere else, especially when you’re walking along the canals and the leaves have changed colour.

How Dutch have you become?
I now get separation anxiety if I’m not within 100 metres of my bike. [laughs] I do everything on my bike, and I love it. I’m no longer afraid to get on it in the winter, even when it’s been snowing or hailing. I really appreciate that freedom of being outside and brushing the cobwebs away.

Since I’m half French, I also love cheese. I very much appreciate that the Dutch love French cheese too, so I can still access it. The directness hasn’t rubbed off on me at all. I’m still a bit dithery. That’s my British side, but I’m more pragmatic now, especially when it comes to business. When something isn’t working, I’m eager to move on and not obsess or worry about it. I’d rather think about what I’ve learned and keep moving.

Which three Dutch people would you most like to meet?
Amsterdam’s mayor Femke Halsema. I’d like to know more about what’s happening in Amsterdam today and how she thinks it will evolve. I’d want to ask her what she’s excited about and what the challenges are. It must be a very difficult job, and I’d be fascinated to find out what her plans are for Amsterdam. I’d like to know her point of view on the sociology of the city, urban planning, security, and culture.

Vincent Van Gogh. If I were to, say, go get coffee with him, I’d want to meet him in a cafe in Arles in the south of France. It’s an area I really know well, and I’d want to ask what inspired him to do all those beautiful paintings he created while he lived down there. Even better, I’d go explore the area with him.

Paul Polman. He’s Unilever’s former CEO. I think he stepped down in 2018. He’s semi-retired and could be enjoying his millions, but he’s now become a business activist. He’s trying to mobilise heroic CEOs to tackle climate change and inequality. I think that’s bloody brilliant. What terrifies me at the moment is that we’re all being segmented generationally. It’s like it’s the young against the old. We should all be working together since we all bring different qualities to the table. We should all be backing him and finding out how we can help create changes within the business world.

What’s your top tourist tip?
The Kröller-Müller Museum. It’s outside of Arnhem, and it’s a magical place. It’s got something for everyone. You can get lost in the sculpture garden. The collection of art that they have is fantastic, and it includes the second largest collection of Van Gogh paintings after the museum in Amsterdam. It’s like being transported to another dimension.

Tell us something surprising you’ve found out about the Netherlands.
There’s an article that appeared in The New Yorker back in September titled ‘How I Learned to Cycle Like a Dutchman.’ There’s a section where the author, who is an American, says he assumed that Dutch people have been biking for generations. That’s what I thought as well but, as he discovered, that wasn’t true. Dutch cities had become dominated by cars after the Second World War. Between the ‘50s and the ‘70s, the number of cars exploded from 100,000 to nearly 2.5 million, which is bonkers.

Bike use plummeted, but when more and more people started getting killed on the roads, everyone started to protest. They wanted to take the streets back. That’s when they started to build more cycling lanes and the bike made a comeback. We’ve all heard the story about the Germans taking away all the bikes during the war, but cycling sort of went dormant between then and the ‘70s. I didn’t know that. It’s a great example of how cities all over the world can change if everybody puts their minds to it.

If you had just 24 hours left in the Netherlands, what would you do?
One of the things that I love about the Netherlands is that you’re never far from the water. I’d start off the day with a walk along a beach. It’s always glorious, no matter what the season, especially in the autumn and winter when it’s wild and stormy. I’d start the day on Texel or a place like that.

Then I’d come back to Amsterdam and get on one of those lovely, small, old boats to go through the canals with friends with plenty of bitterballen and cheese. After that, we’d get another boat to go to Vuurtoreneiland and have a meal there. I’d want to be by the canals, the sea, and the water before heading off to wherever I’d be going next.

The upcoming schedule of events hosted by 5×15 Amsterdam can be found here.