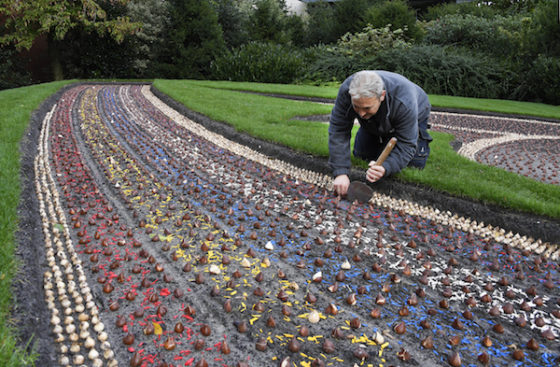 The Keukenhof bulb park is one of the most popular tourist destinations in the Netherlands and work is now beginning on getting ready for next year’s flowering season.

If you have any tulip bulbs that need planting, now is the time to do it. With summer officially over, the planting season has begun. This means the gardeners of the Keukenhof Botanical Garden have been hard at work setting up the flower display for next spring.

The centre piece of the garden next year will be a 50 square metre mosaic made up of 50,000 tulip bulbs. The theme of next year’s flower show is ‘colours of the world’, and the mosaic will feature a massive tulip alongside a rainbow.

‘There are 1.5 million people visiting Keukenhof every year and they come from more than 100 countries,’ said Tom Schreuder, the commercial manager at the Keukenhof, ‘So we thought it was a beautiful theme to use all these colours with meanings and rituals from all over the world.’

Though the diversity of Keukenhof’s tourists is something to celebrate, overcrowding can be a source of frustration for many visitors. When the garden opens its doors from March 21 to May 10, tourists travel to Keukenhof in droves.

This past spring saw chaotic traffic jams when over 200,000 tourists attempted to see the tulip park at the same time. Eventually the park had to discourage tourists from coming to visit, and cars were dissuaded from going close to the bulb growing region altogether.

Schreuder says the organisers will do their best to control the crowds next year.

‘Last year we were open for 61 days, and we had traffic problems on two days because of Easter and the beautiful weather,’ he said.  ‘We hope it won’t happen again next year, but when the weather is beautiful the bulb fields are at their most beautiful and it will be busy in here.’ 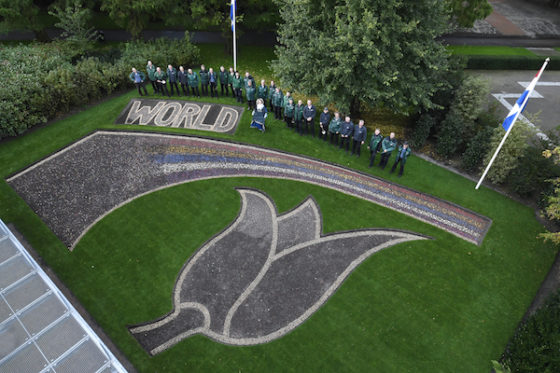 To combat congestion, the park is investing money in directing visitors to public transport instead of using private cars and coaches. The park will also plan events on weekdays to encourage tourists to come on days that are less hectic.

The Keukenhof has has been popular since it first opened to the public in 1950 when  236,000 visitors turned up. But the origins of the park spans further back that that. The name ‘Keukenhof’ dates back to the 15th century when countess Jacoba van Beieren would gather vegetables and fruit from the garden for the kitchen of Teylingen Castle. Hence the name ‘Keukenhof’ or ‘kitchen garden’.

The Keukenhof Castle, named after the garden, was built in 1641 and the estate eventually grew to encompass 200 hectares. Jan David Zocher and his son Louis Paul Zocher, two landscape artists most famous for designing Amsterdam’s Vondelpark, redesigned the Keukenhof garden in 1857.

Then, in 1949, a group of prominent flower bulb growers decided to use the estate to exhibit their flowers, and this is the park we know today.

This year, as the garden celebrated the official planting season, a woman working for Keukenhof dressed up as the countess Jacoba van Beieren to pose for promotional photos. She argued that the countess would have been proud to see so many visitors to her beloved garden.

‘She was actually very much in love with her own land, and for her it would be a pleasure to see how many people visit these days,’ the 21st century ‘countess’ said.