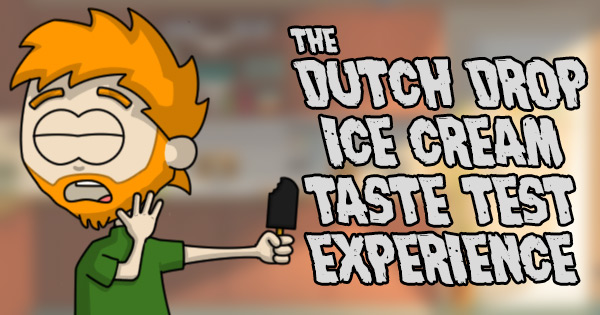 Invading Holland documents the adventures of an accident-prone Englishman as he continues to explore life in Holland.

‘I’m not sure ice cream is supposed to be this colour,’ I commented to my wife as I held the completely matte black ice cream by its little wooden stick.

‘Yeah. It is a bit odd,’ she replied while looking at her own ice cream with equal suspicion. She had promised to join me in this self-destructive course of frozen confectionary based action. After all, she’d been the one who’d made the discovery of liquorice (drop) flavoured ice cream in our local supermarket and suggested we try them. I couldn’t say no since I’d just spent the last few weeks researching different flavours of Dutch drop for a blog post. 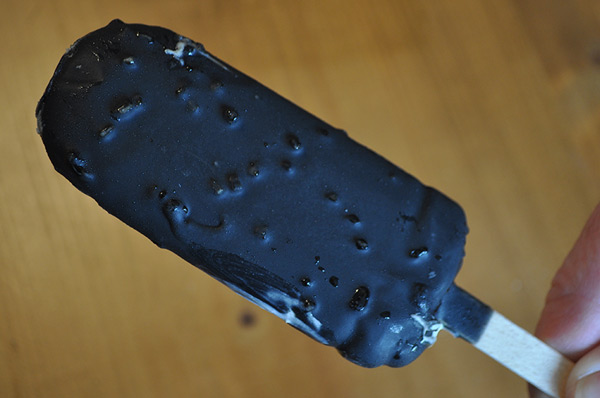 It was too late to back out now. After counting down from three we both bit into our drop-ijsjes.

‘Urk. Nee! Nee!’ The reaction took me by surprise. Mostly because it had not been my own.

I’d merely been puzzled by the liquorice-like flavor but a look of absolute horror had immediately crossed my wife’s face. ‘That’s horrible!’ she exclaimed and then in one quick movement spat the whole thing into the nearby bin and started drinking directly from the kitchen tap.

I was confused. ‘But you’re Dutch,’ I exclaimed, expecting her Dutchness to give her a natural tolerance to all things drop related.

‘I don’t care. That thing is not normal. How are you still eating it?’ she asked as she desperately opened and closed kitchen cabinets, probably searching for something else to remove the taste from her mouth. If she didn’t find something soon I suspected she would start drinking the olive oil.

‘Well, it’s not nice but its manageable,’ I said with a shrug.

The outer coating, which I’d expected to be chocolate, had turned out to be drop. It had somehow been textured similar to chocolate. I was not enjoying it but it was fair to say that my reaction had not been as strong as my beloved’s.

While eating a handful of crisps she pointed out that ‘manageable’ was not very high praise for ice-cream. If the only compliment you can give an ice cream is that it’s tolerable it has already failed miserably at being an ice cream.

‘Does this mean I’m more Dutch than you now?’ I asked and smugly took a second bite from my drop ice cream. This turned out to be a mistake.

On my first bite, I’d only experienced the outer shell and the thin layer of ice cream behind it. This time I bit directly into the center and the terrible secret hidden there behind the ice cream. My change in reaction was immediate.

‘Yuk! Oh no! You’re right. It’s not manageable. It’s most definitely un-manageable,’ I exclaimed in horror upon discovering the new sensation. I practically pushed her out of the way to get into the kitchen.

Past the layer of un-natural drop coating and untrustworthy ice cream was a thick chewy liquorice center. Just a slab of cheap liquorice that had not been made ice cream appropriate in any way. The taste, texture and temperature change was jarring. It did not fit at all.

‘Why would anyone do that to an ice cream?’ I asked in shock after I’d safely exiled the whole thing to the bin and grabbed a glass of water.

‘I’m sorry I ever doubted you and your Dutchness,’ I apologised.

Our daughter (who is an ice cream enthusiast and had been nearby) decided that she would also like to try one of these strange ice creams. Witnessing our reactions to them had seemingly done nothing to deter her from this course of action. I think her six-year-old brain could not conceive of a world were ice cream was horrible. Her illusion of this perfect world was quickly shattered upon the first bite.

For a moment we considered giving one to our three-year-old son to see how he would react. However, we quickly decided that would be too cruel. 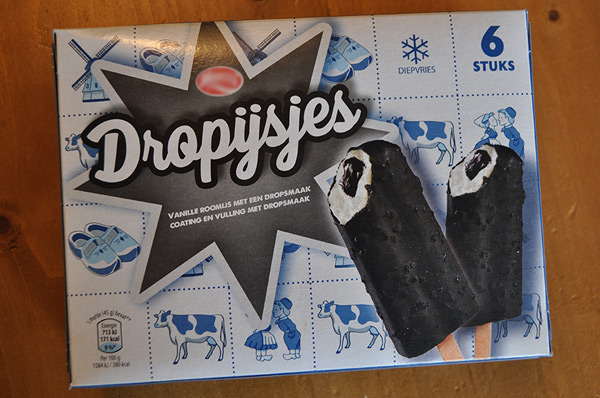 Out of the six drop ice creams that came in the box we only tried three. I think the rest might still be hiding in our freezer somewhere. I’m too scared to go and look for them. Maybe I’ll give them to an unsuspecting guest someday.

This blog was first published on Invading Holland.