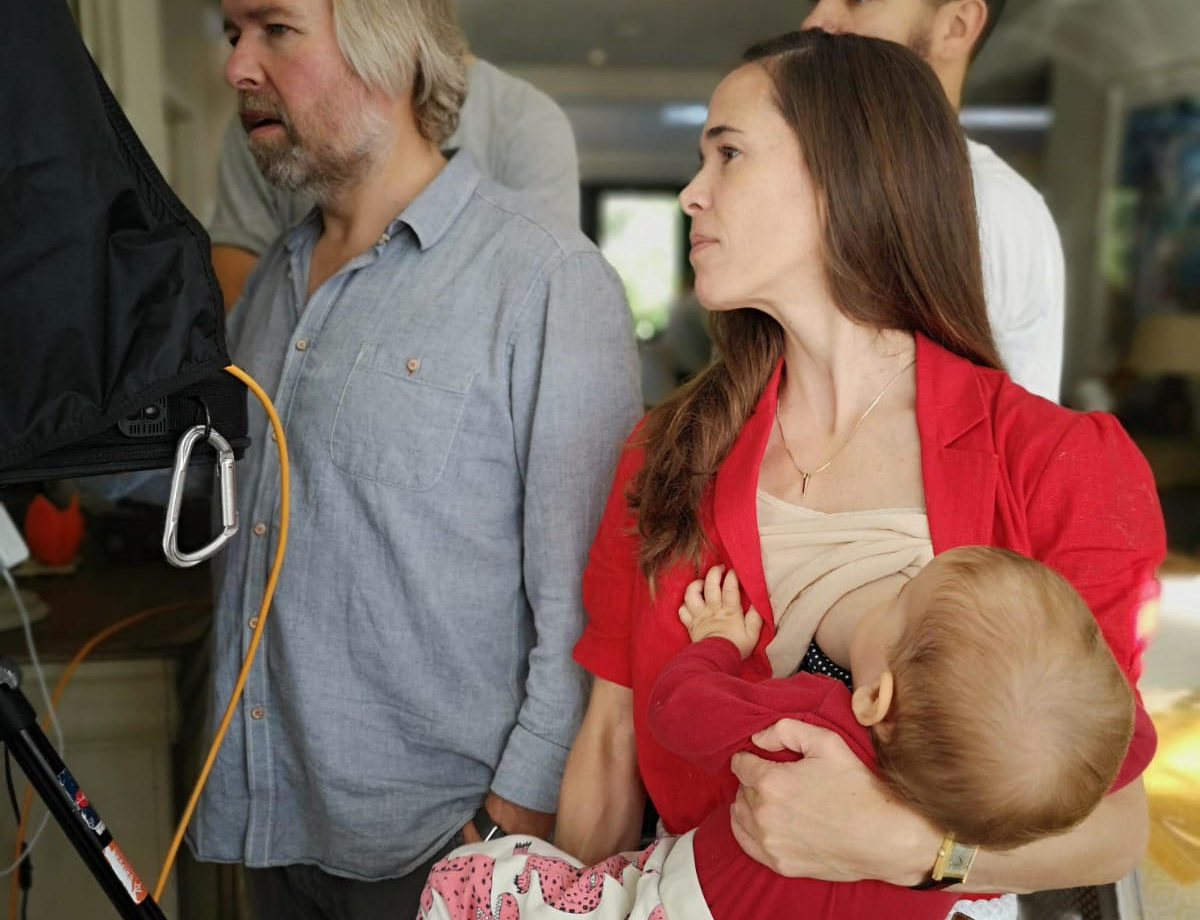 How did you end up in the Netherlands?
I was living in London with my boyfriend and he had an offer that he couldn’t refuse, working for Wieden+Kennedy in the Netherlands. We decided that he would go there, get it out of his system, and then come back. He commuted back and forth for a year until things got more complicated because I got pregnant. I thought at first, very naively, that I could carry on my life in London on my own. This didn’t really happen the way I thought it would and so, three weeks before giving birth, I arrived in Amsterdam.

For the first few years I was back and forth because my agent, clients and friends were all in London. Then we decided to have another baby, and that’s when we thought that we’d better settle here and stop being between two countries and so we moved here permanently two years ago.

Right now, I love it here. Where we live, on the Prinseneiland, you can swim in the canal. I swam yesterday and I’m going to swim later today. I can actually paddle board from my home. I leave in my swimsuit, cross the street, take the paddle and go around the island.

How do you describe yourself – an expat, lovepat, immigrant, international ?
I am a citizen of the world. I don’t see myself as an expat. I think we’re super fortunate to be in Europe and to be able to just decide where we want to live. It’s funny, my heart is in a few different places. I’m still in France and I’m still in London and I’m here. For now, Amsterdam is the right choice for us.

How long do you plan to stay and why?
We haven’t got a long-term plan. We’re not like that. We’re more into what suits us for the moment. My children attend a Dutch school and pre-school. For now, we’re really trying to be integrated. We eat poffertjes for breakfast. That’s how Dutch we’ve become!

Do you speak Dutch and how did you learn?
The Dutch never let you speak Dutch – they answer back in English, which is great, but it doesn’t help us with wanting to speak the language. I should speak Dutch at some point because of my kids. I feel isolated sometimes when I can’t help my son with numbers or words. You feel like you want to participate in singing the Christmas songs and all that!

What’s your favourite Dutch thing?
The Dutch are very practical. It feels like every problem has a solution. I read that in the 60s there were too many cars in Amsterdam, so they decided to put everyone on bikes. No one complained. In France there would be riots. In France, every year, kids drown in the summer, so they put fences around pools to stop them from drowning. In Holland, they teach them to swim!

How Dutch have you become?
I love how the Dutch raise kids. My son Jules is just five, and a month ago we gave him the key to the house, and we let him go around the island on his bike with his friend. It felt like a big step and he was really proud of it. I think that’s how laid-back we’ve become in our approach to parenting.

Which three Dutch people (dead or alive) would you most like to meet?
Dana Lixenberg. She’s a great photographer and I love her work. I would ask her about her life story and what her mission in life is. As a photographer, I feel like you have to have a voice and you need to use it carefully. ‘It’s Just Love’ [Sophie’s 2016 exhibition] was like that. It was so much more than pictures.

Femke Halsema. The first [non-interim] female mayor of Amsterdam. I think she’s amazing. She’s also a film maker. She seems to be so much more than a politician.

Clarice Gargard. She’s a badass Dutch-American journalist who represents the Netherlands in the United Nations organisation UN-Women. I love this new generation of women who are starting to be empowered, in the right way, and want to have their voice heard.

What’s your top tourist tip?
I love to go to the Westerpark. It’s less famous than the Vondelpark but it has a lot to offer. Woeste Westen [a natural playground] would not exist anywhere else in the world – it’s so free and wild, and you can cook your own bread around the fire.

Tell us something surprising you’ve found out about the Netherlands
I recently read an article in the New York Times about kids getting dropped in the forest as a beloved scouting tradition. I thought it was pretty amazing. You would never be able to do that in France or in the UK – there would be so many health and safety issues.

If you had just 24 hours left in the Netherlands, what would you do?
I think I would just take a boat and go swimming. It’s my favourite thing to do in the Netherlands. In the Amstelpark, by the Riekermolen windmill, the water is amazing and you can just swim there and feel like you’re on holiday.

To find out more about Sophie’s work visit Instagram. Her latest exhibition, ‘I Didn’t Want to be a Mum’, runs from 19-22 September to coincide with the Unseen Amsterdam photography festival.