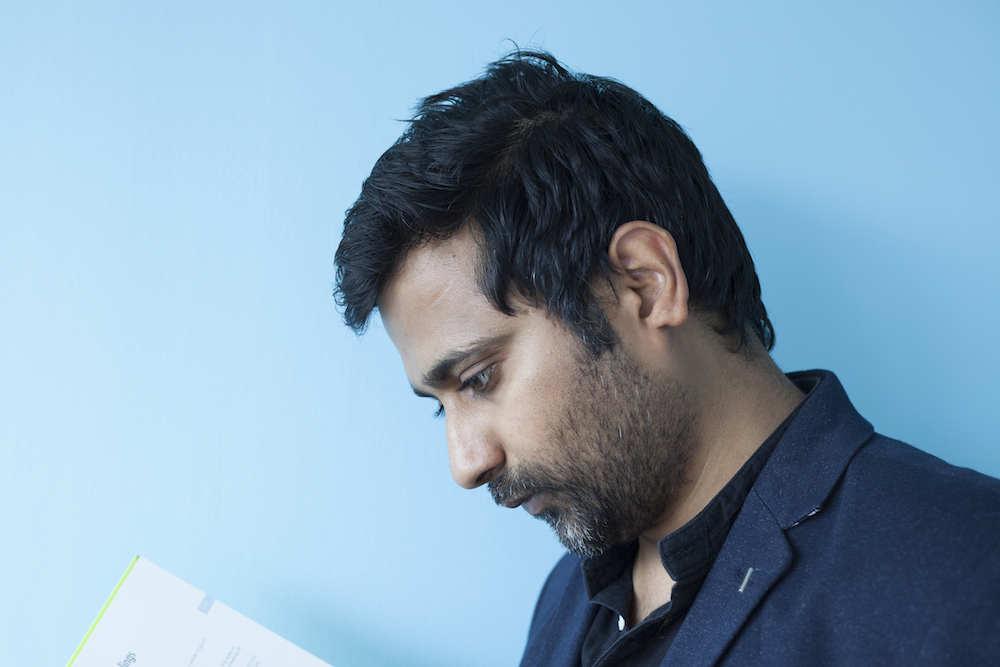 Originally from Pakistan, Basir Mahmood is an artist, photographer, and filmmaker whose works have appeared in galleries and museums all around the world. A few years ago, he was awarded a research fellowship in Amsterdam, and he continues to live in the city.

How did you end up in the Netherlands?
I have been travelling around for the last eight years now, from one artist residency to another. This is how I also ended up at the Rijksakademie van Beeldende Kunsten in Amsterdam in 2016. After finishing the two-year-long programme, I decided to stay because of the city itself and the people I met here. In Amsterdam so far I have collaborated with professional translators, athletes and young actors, to produce video works.

How do you describe yourself – an expat, lovepat, immigrant, international?
I think I would be more comfortable calling myself an expat, even if I was residing back in Pakistan. This feeling comes mainly through the position I take as an artist while making a work and also through constant travelling. For years I have been observing unfamiliar contexts through my work and with time I realised that I am slowly losing a sense of belonging. When I went back to Pakistan, I continued to observe things the way I do in other countries.

I am not a great believer of maps anyways, the lines we draw keep on changing with time. They are only meant to navigate through a present time, so it is better not to take them too seriously.

How long do you plan to stay?
This is the question I ask myself almost everyday, and my answer to this changes every time. I do call it my home, this calm, cosy city of Amsterdam. Today, a group of tourists asked me for an address on the street, and I was able to guide them correctly for the first time. I felt proud and at home. The only unsettling thing for me is that the Netherlands is just too fine; too clean, too beautiful. It is almost unreal compared to where I come from and the other places I have visited. Sometimes, I do not know how to deal with its excellence.

Do you speak Dutch and how did you learn?
I wish, one day, that I will wake up and start speaking Dutch. I am lazy, not just with languages, but otherwise too. Recently, I have started listening to Dutch radio stations at home. You can consider it my intention towards learning the language. The longer I stay here, the more I feel that I have to push myself to learn it, no matter how difficult I feel it is. Without Dutch, I feel like I am missing out on something important, for instance those conversations on the street or in supermarket that might be useful for my work as an artist. I mostly have to depend on my sight, which is also not bad.

What’s your favourite Dutch food?
I like food and people who like to eat. However, I am still very conservative when it comes to trying out something new. Despite this, here in the Netherlands, I have tried foods that are easily available while going around the city that I now absolutely love. They have become part of my tastes. Poffertjes, for instance, are one, and bitterballen another.

How Dutch have you become?
I am not sure how much, but I think living here has turned me into a straightforward person. At first, I thought I might sound rude, but I later realised it just saves so much of my time. Also, at home, I have no curtains on my windows, which I think is very Dutch of me.

Which three Dutch people (dead or alive) would you most like to meet?
More than meeting individuals, I wish I had been around in the 1960s and early 1970s, when the Netherlands had one of the most influential art scenes in the world. During that time, many Dutch artists travelled abroad and established themselves internationally. Many very interesting artists came here to develop their careers as well.

I was introduced to the work of Bas Jan Ader and Marinus Boezem when I was still a student, probably because of my interest in conceptual practices. Jan Dibbets work I explored very recently while curating a programme for the Stedelijk Museum. I am interested in meeting these artists because they are relevant to what I am trying to resolve today through my own work.

What’s your top tourist tip?
If you are in Amsterdam and feel it is too small, just make sure you are exploring it right, because the city just keeps the image of a small town, but there is actually a lot more to it. It will surprise you with something new in every neighbourhood, like it did for me. Furthermore, it is needless of me to mention the importance of having a bicycle. One will make you feel like a king of the roads while you go around as far as you can go.

Tell us something surprising you’ve found out about the Netherlands
Weather, and the way Dutch people deal with it. I even have an app on my phone that tells me at what minute it’s going to rain and when exactly it’s going to stop. Even then, the weather can be surprising.

When I moved here, I would joke that the weather in Amsterdam seems to be controlled by an angel who is on an internship. Like me, everyone living here has something to say about it. It is a good way to start a conversation with any stranger you meet here.

If you had just 24 hours left in the Netherlands, what would you do?
I would take a boat and go as far as I could in the last 24 hours.

Basir’s video works, Good Ended Happily, was currently being screened as part of a solo exhibition at Wilfried Lentz Rotterdam. His 2016 video installation Monument of Arrival and Return, is also part of the Freedom of Movement exhibition at the Stedelijk Museum in Amsterdam. You can learn more about Mahmood and his others works via his website.