Every December since 2014, I’ve looked back on my favourite restaurants of the year in Amsterdam. Not necessarily newly opened – but new for me. Usually, I base the list on my Restaurants of the Month – a revolving selection I make (unsurprisingly) once a month.

But this year, for various reasons, a few of these restaurants no longer seem appropriate for this list – either they were temporary and have now closed down, or they’ve been replaced by something (to my mind) better.

So for my 2018 list of best restaurants in Amsterdam, around half came from this year’s Restaurants of the Month, while the other half I discovered before or since.

Also important to note: this list is not meant to be exhaustive.

Firstly, because there are still a great many fantastic restaurants in Amsterdam that I’ve not yet visited; and secondly, because it’s just a snapshot of a single year. For my complete recommendations on the city’s food scene, download my Amsterdam Restaurant Guide or use the handy restaurant finder to search for places that meet your requirements.

From one of the brains behind the popular BAUT concept, Restaurant C adds bold flavours and playfulness with temperatures from Chef Arnout van der Kolk – both of which make this place one of the best eating experiences in Oost. The five-course menu will set you back €55, but you’ll want to get the wine pairing as well for another €38 (a la carte options are also available).

It’s well worth the price tag, however: some of my favourite dishes included raw mackerel and cucumber, yuzu gel, saffron kroepoek, and a spicy-sweet-citrusy sauce. Or clams and razor clams served with several varieties of seaweed and an umami-rich foam. Be sure to sit at the chef’s table at the bar (especially if there are only two of you) for a behind-the-scenes peak into the kitchen. 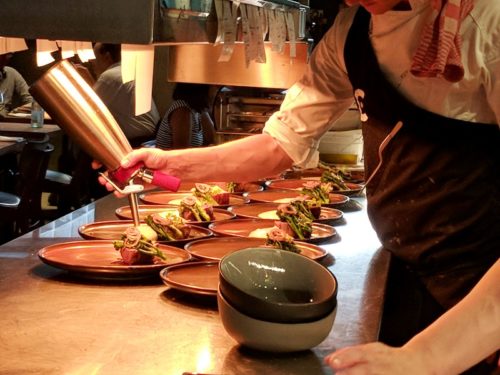 C’s chefs plating up the mains…

There’s very little Dutch food in Amsterdam that’s both sophisticated and true to its traditions. But Floreyn walks that line perfectly. Think bitterbal, but then filled with Messeklever cheese and served with smoked beetroot, radish, apple and fennel. Or mustard soup that’s been deconstructed into a clear broth with cheese foam and three types of mustard. Even dessert uses local, seasonal vegetables: carrot and parsnip ice cream with a sweet hutspot and citrusy crème brulée.

This is very accomplished cooking that stays true to its Dutch roots. It may not be cheap, but the quality of Floreyn’s food and wines, as well as its great location in de Pijp, is more than worth the price tag. 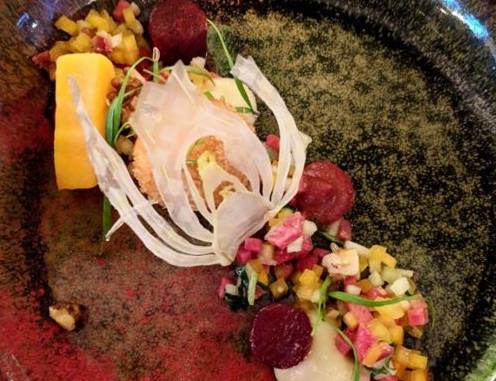 I had an Indonesian place as one of my Restaurants of the Month this year, and it wasn’t this one – it was Ron Gastrobar Indonesia. But given that Ron Blaauw’s ode to rijsttafel is down in Oudekerk, and given that I discovered (and loved) Tujuh Maret soon afterwards, the latter just pips it.

On the foodie-meets-shopaholic Utrechtsestraat, Tujuh Maret is a family-run restaurant that’s not much to look at but absolutely delivers. The regular rijsttafel (including dozens of meat, fish and vegetarian dishes to share, all served with rice) costs €27.75, which is cheaper than many in Amsterdam but is just as extensive. And (wait for the best bit) several of the dishes are actually properly spicy. Not uncomfortably so, but I’d have a few friends whose eyes might water a little.

And that’s a good thing because it’s been regrettably hard to come by in Indonesian restaurants here in recent years. It’s hard to pick out favourite dishes because I enjoyed them all – even the tempeh, which usually I can’t stand. So that’s saying something! 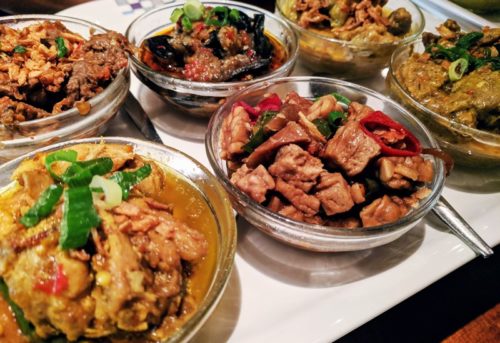 Warning: do not eat for at least four hours (more if you can manage it – I can’t) before stepping foot inside De Aardige Pers. There’s no way you’re getting out of there anything other than food-baby full. With the fasting out of the way, start by ordering the trio of starters – the chef’s selection – all top notch. Then move onto the grilled meats: simple but perfectly cooked kofte kebabs, chicken thighs, lamb loin and so on – all served with fragrant saffron rice and grilled tomatoes. Don’t worry – they’ll give you a box for the leftovers to take home if you ask.

De Aardige Pers isn’t fancy looking, but the food is outstanding and the prices extremely reasonable (we paid €30 each for everything I described above plus plenty of wine). 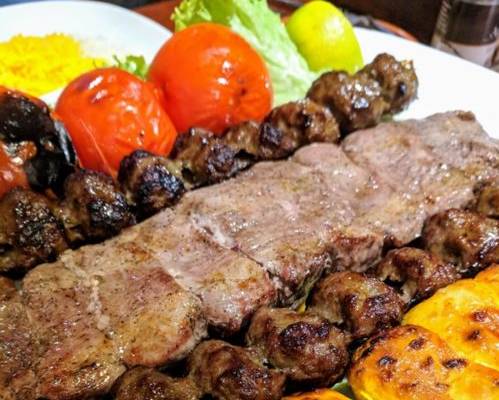 Overlooking the Amstel River and with a huge terrace in summer is Portuguese restaurant Girassol – one of my favourite finds in my new neighbourhood (albeit the place has been there for donkey’s years so won’t be new to many of you). I’ve been there three times since I moved to Oost, and the last time was a little different – though no less delicious.

While the food used to be rather rougher around the edges – think steaming, garlicky clams and perfectly charred octopus – it’s now prettier to look at with less on the plate for the price. But as the flavours are just as good, I wanted to include it anyway. I am, however, curious to know whether Girassol changed chefs or whether the existing chef just decided to pimp up their menu… 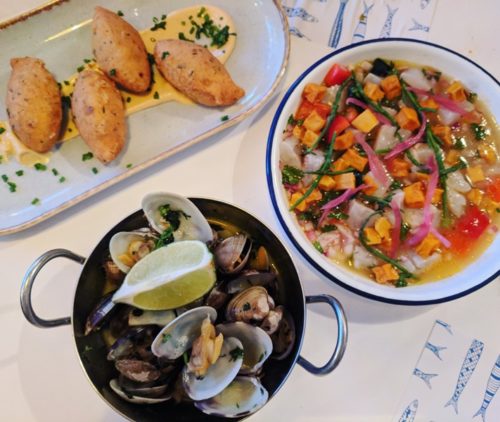 Speaking of Southern Europe, another fabulous find in my new buurt was Le Due Sicilie – a Sicilian restaurant presumably run by two people from the Italian island itself. And of course exuding all the warmth and sunshine in their food and in their manner that you’d expect. So far, I’ve tried the pulpo, the swordfish and the ziti pasta – all of which were spectacular, especially when washed down with a well-rounded glass of Nero d’Avola. I can’t wait to go back for more. 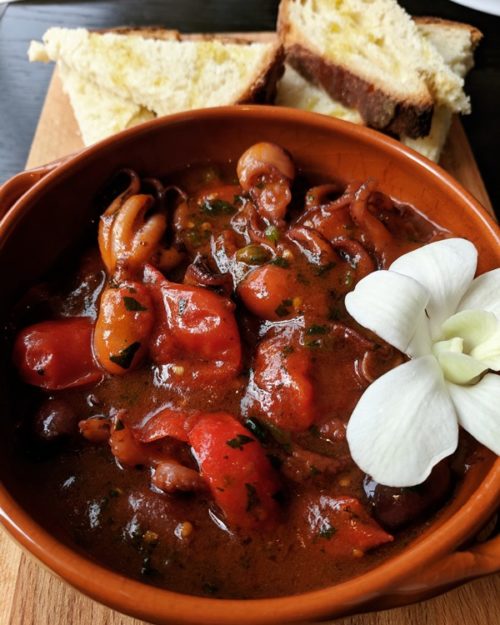 The mouthwatering pulpo at Le Due Sicilie

Tucked behind the OLVG Hospital is the minimalist, Scandi-chic, hipster-tastic 4850 – so called because it occupies numbers 48-50 on the Camperstraat. During the daytime, pop in for excellent coffee and the most pillowy-soft cinnamon buns you’ve ever tasted.

Then, in the evening, duck inside for a glass or several of wine (they have an extensive wine list) and a shareable snack (not your average bitterballen fare). Or go for the full-blown chef’s menu of four courses for €40. Whatever the time of day or your reason for visiting, this place delivers.

Vuurtoreneiland literally means ‘lighthouse island’, and this outcrop of land just off Durgerdam was originally built over three centuries ago. Now, you can take a boat from the Veemkade to the island for a Dutch fine dining experience that varies according to season. In winter, you eat in the converted fort – think open-hearth fireplaces, romantic candles and sheepskin rugs.

As the island has no electricity or running water, food is cooked using old-school wood and fire, while cutlery and glasses aren’t changed between courses to save on water usage. And the menu has a clear local, seasonal message that’s heavy in vegetables and sustainable protein throughout its six courses. An intimate dining experience that’s well worth the waiting list. 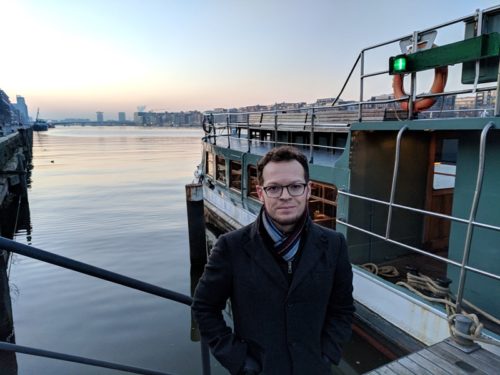 Right on the southern tip of Indische Buurt, you’ll find hidden gem Bistro Zebra – a sort of Asian-fusion hybrid restaurant whose chefs aren’t afraid of big flavours. First up, I tried a plate of marinated grey mullet sashimi with pickled (lightly fermented?) root vegetables and wasabi mayo. It was fresh and inviting from the fish, sweet and sour from the vegetables, with both heat and umami from the wasabi and the soy marinade. An excellent combination.

Still on my fish kick, I ordered the pollack next: it came with a heady mix of kimchi and sake cream that formed a rudimentary sauce for the udon noodles. Spicy, creamy and savoury – I couldn’t get enough of it. 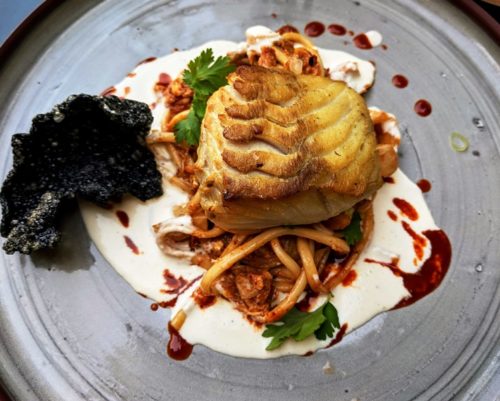 A fusion of flavours in Bistro Zebra’s noodles, fish and kimchi

Although I first published my Ramen Roundup back in October 2017, I’ve added half a dozen places since then. Yup, 2018 has been the year that ramen took Amsterdam by storm. 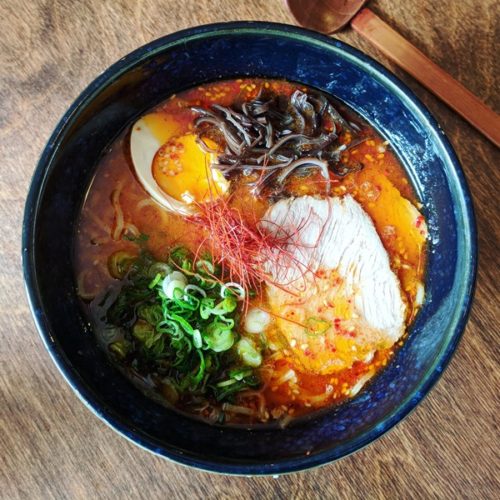 Umaimon featured in my top 10 list last year, and it’s still a firm favourite, but there are a couple of others I’ve discovered in the meantime that I’m also loving. Namely Betsubara in Oud-West, Hinata near Westerpark, and Fou Fow’s new branch on Van Woustraat (dangerously close to home). I couldn’t pick just one for this year’s top 10, so suffice to say that ramen – in general – is one of 2018’s most unmissable food trends in Amsterdam.

This blog was first published on Amsterdam Foodie.