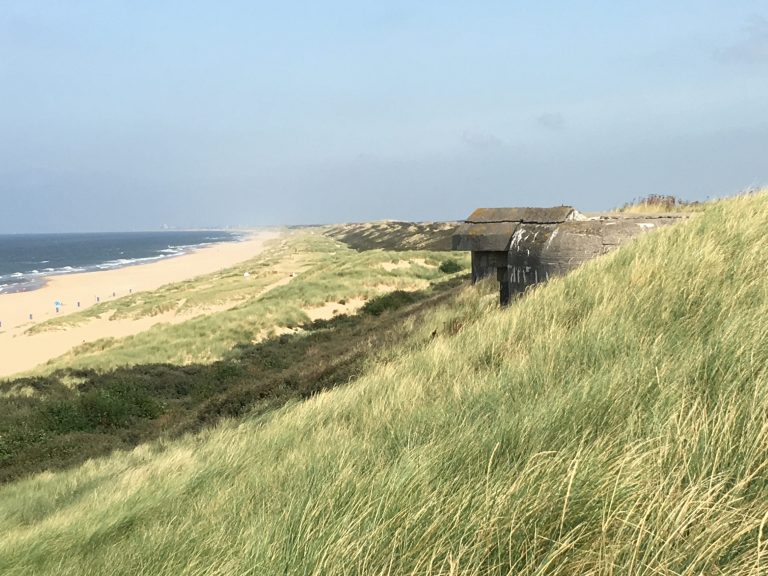 What do you do if you have been sent to live in the Netherlands as a trailing husband for six months, while your wife works in a high powered job? Visiting columnist Joe Weeg has been exploring his neighbourhood. Part 1: Bunkers and naked volleyball.

They are stark naked. Yup, not a speck of clothes. The eight old men have the volleyball net pulled tight in the sand and are shuffling to new positions as I come over the dune. The server makes some comment that tickles everyone’s fancy and then hits the ball underhanded to a loud cheer. A flurry of naked men descend on the net. Point to server.

Trust me, this began innocently enough. I was curious about the bunkers that line the beaches at Scheveningen in The Hague, Netherlands. They are leftovers from World War II and were part of Hitler’s plan to defend the coast. The North Atlantic Wall ran all the way from Norway to France.

And it just happens that in Scheveningen the bunkers sit directly above a nude beach. No kidding.

The North Atlantic Wall was not Hitler’s best plan, by the way.

Jacques Hogendoorn and his brother Piet have been studying and teaching and collecting paraphernalia on German bunkers along the Atlantic Coast for years. Jacques gave my wife and I a tour at a command bunker safely tucked into a dune some distance from the sea.

‘Total of German bunkers in Scheveningen (the port area of The Hague) is 900 bunkers. The estimated total of bunkers that made up the North Sea Wall were 90,000 bunkers.’ 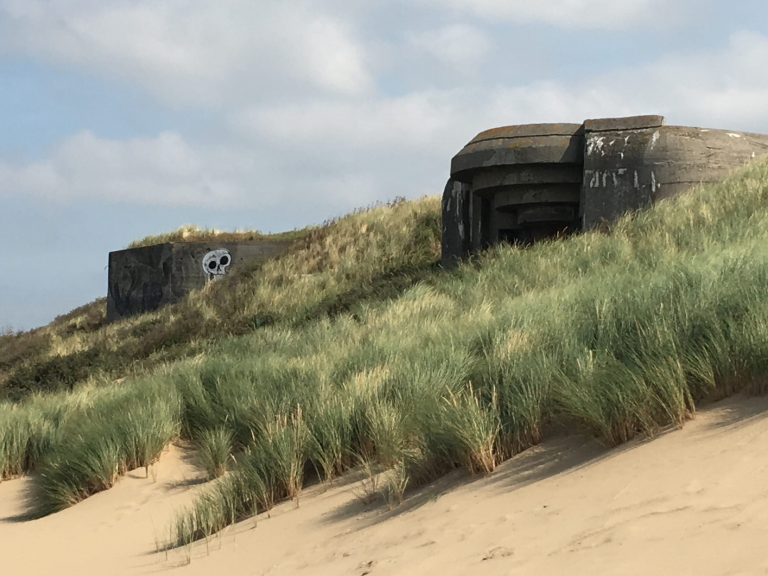 So there you have it. 90,000 bunkers — totally useless. A cement contractor’s nightmare. Or dream.

And, of course, there was the small problem of all the people who lived by the sea at that time.

‘Over 100,000 people were displaced from their homes in Scheveningen and The Hague so that the Germans could build their Atlantic wall,’ according to Piet Hogendoorn, a museum-grade collector of World War II paraphernalia.

And, as is the way of dictators, starvation was close on the heels of this displacement. Thus the stories of the Dutch folks in Scheveningen eating tulip bulbs during the hard winter of 1944-1945.

Today, the empty bunkers stick out like broken teeth on this vibrant Scheveningen beach scene. Wind surfing and Ferris wheels and bungee jumping are the order of the day. War and death? Not so much. 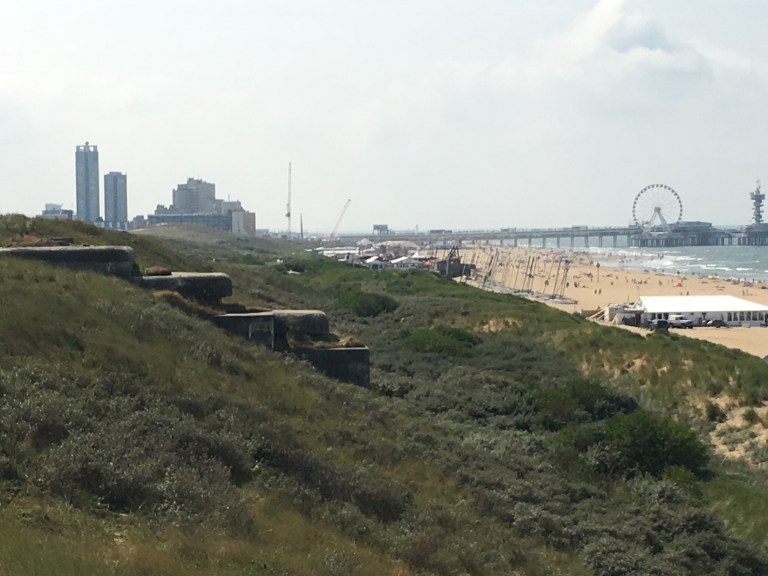 Back home in Des Moines, we really have nothing so physically in your face as a bunker. In fact, memories are growing dim as the last of that generation is slipping away.

Sure, we have our World War II memorials in most towns.  And we have the stories of the five Sullivan brothers from Waterloo killed in the sinking of the USS Juneau, and of the women recruits who trained at Fort Des Moines for the Women’s Army Auxiliary Corps, and the stories from David and Jennie Wolnerman of Des Moines and of their survival in the Nazi concentration camps in occupied Poland. And don’t forget the Iowa Gold Star Military Museum at Camp Dodge with all its exhibits and stories.

But there is just something about a large, concrete bunker that causes a sharp intake of breath. And not in a good-surprise way.

Back on the dunes, the old men are still playing even though it’s late in the afternoon. A corner shot is missed and everyone tumbles into the sand, where they lay on their backs laughing at each other and at their old-man knees. A good time had by all.

Who would have guessed?

Naked as jaybirds . . . in the shadow of a bunker.

This column was first published on blog Joe’s Neighborhood