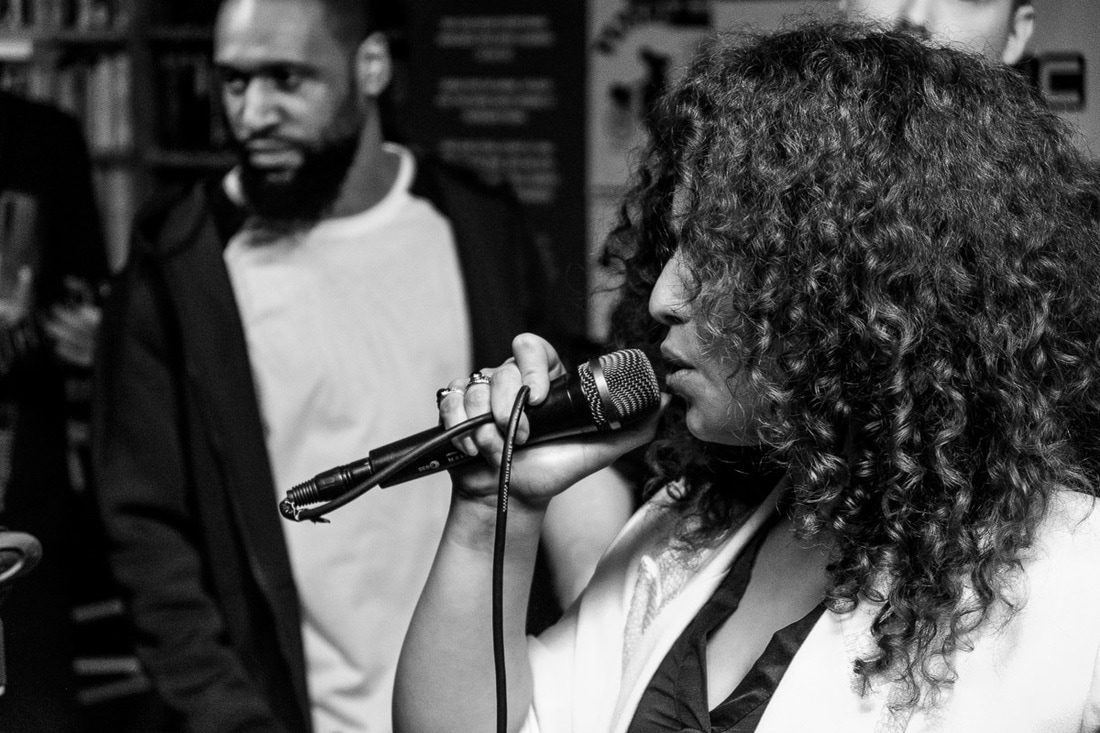 BLESZ, in the background, hosts the Spoken Word nights

Spoken Word – a performance art where words are conveyed to an audience in poetry, rap or music – is powerful, accessible and diverse. Deborah Nicholls-Lee shines a spotlight on the emerging English-language scene in the Netherlands.

In a curtained-off room lined with books and posters, in the back of a west Amsterdam bar, a blond woman in a floral dress bobs around the microphone nervously. She ties herself up in knots with disclaimers about the spoken word poetry she is about to perform. ‘It’s super short – no worries – and it doesn’t have a title. I don’t know, I’m not good with titles…’

‘Do it!’, ‘Just do it!’ holler two voices from the audience – more supportive than impatient. The piece is heard, and there’s a cooing ‘aaaah!’, a cheer, and a warm, enthusiastic round of applause.

This event, organised by Word Up, is one of a clutch of English-language spoken word events which have popped up in Amsterdam over the last couple of years and are edging their way to other parts of the Netherlands. With many located in the back rooms and basements of lesser-known venues, there is an underground feel to this small-scale scene and an intimacy between the sympathetic audience and the – often novice – participants.

Founder of laid-back Word Up and of Outspoken, its more curated big sister, Evelina Kvartūnaitė understands the special relationship between audience and artist at these events. She once saw members of the crowd flock to the stage to hug an artist who had just shared for the first time her traumatic experience of rape. ‘That was the catharsis for me,’ she says. ‘It’s the moments [like that] that really open you up and make you feel like a community.’

As they sat side by side on the kitchen floor at 3am, it was a friend’s heartfelt and unexpected recital of his personal poetry that kickstarted the venture: ‘He kind of bloomed, you know?’ she explains enthusiastically.

‘Let’s make you a space to perform – you’re amazing,’ she told him. And when she found that no such platform existed for English speakers, she decided to start something herself.

With most events donation only or charging a minimal fee, spoken word prioritises inclusivity over profit and aims to attract a diverse line-up and audience. Alongside co-organiser, rapper and spoken word artist BLESZ, who hosts the nights, Kvartūnaitė tries to create a ‘living room feel’ and put newcomers at ease. ‘If someone is scared I’m not going to put them on the spot,’ she says. ‘I’m going to make sure they feel comfortable.’

Artists’ treatment of the genre is skilled and varied. On the nights I attended, performances included raps about social history and racism; candid, hard-to-hear lines about loneliness; and celebrative narratives about rampant love making – one executed with jaw-dropping brilliance by Margo van de Linde. Performers were men and women of all ages, nationalities and backgrounds.

Being able to speak across all the things that we look at as separation within such a diverse group, says Kvartūnaitė, helps show how universal our experiences are. ‘We have people who come from abroad; we have people who are born in Amsterdam, who live in Amsterdam or who just arrived in Amsterdam: students, workers, mothers, stay-at-home mothers, business people. It’s a wide variety. I really appreciate that,’ she says.

Communicating in English, Kvartūnaitė believes, is also a pathway to inclusivity. ‘The audience we have is so diverse; you lose half of the room when you start performing in Dutch.’

Spoken word artist Sydney Lowell (21) is Dutch but prefers to write and perform in English. ‘I don’t connect with Dutch as much as I do with English,’ she tells me. ‘Creatively, I feel way more limited writing Dutch and I feel like the language doesn’t serve what I want to say as much as English does.’

Though she has been writing poetry since the age of 16, she has only been performing for a year. ‘I didn’t see why I should [perform] before. I didn’t really think of it. And then, last year, I realised that I had such a huge urge to share it because I’m such an expressive person and I felt like I was holding myself back by not sharing this piece of myself.’

Lowell discovered poetry and Shakespeare through the Twilight movies when she was 11. Later, when she was bored in class, she would jot things down to document the moment. ‘Those were just random thoughts, just words, not even sentences sometimes,’ she says. ‘I kept on doing that and those turned into poems eventually.’

On stage, Lowell is unusually poised and calculated for someone so young. She unpicks patriarchy and calls out racism, creating unease, while still her strong stage presence makes it hard to look away.

‘When I take that stage,’ she tells me, ‘or whatever place it may be, it just feels like I am utterly myself … I feel excited. I feel very rooted as well. I’ve never been nervous, I’ve always been excited just because I know that this is what I’m supposed to be doing … I just feel that I’m in the right place, doing the right thing.’

Kvartūnaitė understands this. Her events were born of ‘a deep longing to give space to people to express themselves.’ Spoken word, she says, is ‘about people being supported while vulnerable’.  ‘It’s a means for people to accept themselves and grow’.

Spoken word events in English in the Netherlands

ABC Open Mic A forum for artists to go public with their poem, song or book. Located in a bookshop in central Amsterdam.

Labyrinth A cocktail bar in Amsterdam Zuid serving Caribbean food which runs a variety of poetry events including open mic night on a Monday in Dutch, English and French.

Mezrab Located on the IJhaven, the venue hosts storytelling on Wednesday and Friday nights and Verso, a live literary magazine, five times a year.

PoeTree A meet-up for young, ethnically diverse spoken word artists in the Vondelpark. Hosted by Sydney Lowell and Jemairo Scoop.

Soul Food Poetry Organises a regular event called ‘Knock Knock’, hosted in the UK and in Amsterdam West at Volta.

Word Up An evening where anyone can sign up to perform whatever the level of experience.

Poetry International A great information source for poetry events, many of which are in English. Organises an annual festival in May/June where many international poets perform.

Slamtastic These performance poetry championships or ‘slams’, take place once a month in a café in the small town of Wageningen, just outside Arnhem.