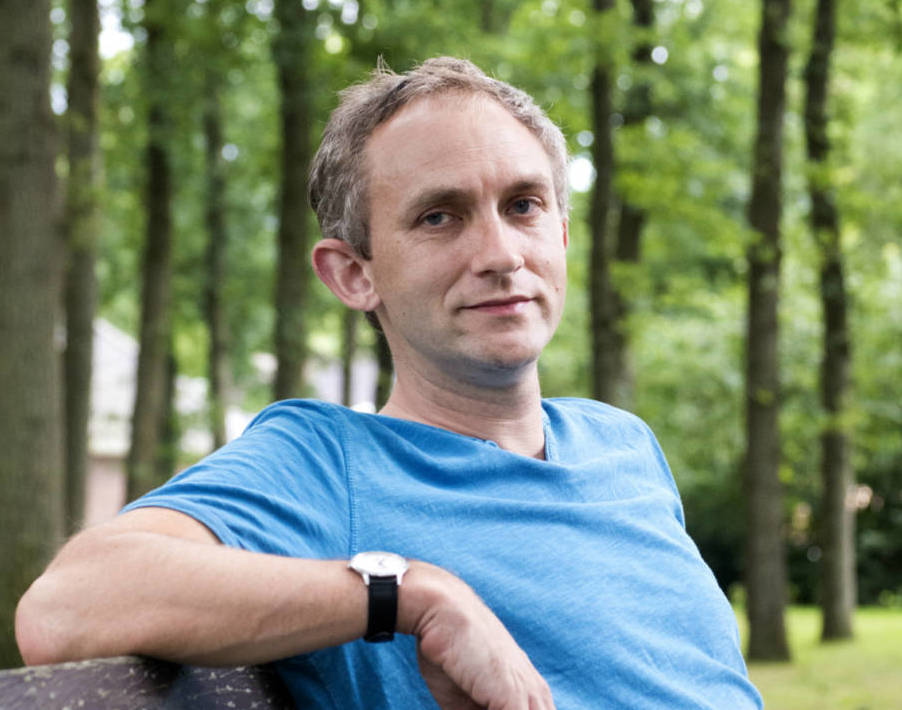 Writer and journalist Gordon Darroch was widowed soon after moving to The Hague with his terminally ill wife, Magteld. He talks about the challenges of single parenthood, Jan Steen and the secret of a perfect uitsmijter.

How did you end up in the Netherlands?
My wife, Magteld, was from Drenthe and like a lot of mixed couples we’d talked idly for years about emigrating, especially once we had children. It became more urgent when she was diagnosed with breast cancer in 2012.

The treatment seemed to have been successful, so we pressed ahead with our plans, but then in 2014, a week after we’d sold our house in Glasgow and booked the removal van, she discovered she was terminally ill. By then we were too far down the road to turn back and in any case she wanted to spend her remaining time with her family. She died seven weeks after we crossed the North Sea.

How do you describe yourself – an expat, lovepat, immigrant, international?
I suppose I’m a lovepat in the sense that I moved for love, but almost as soon as I got here I was on my own again and having to start over. I’m wary of calling myself an immigrant because it’s an easy way to deny the privileges of being an expat – unlike many immigrants, I can easily go home if it doesn’t work out and as a native English speaker I’m under much less pressure to integrate. So maybe I’ll plump for international.

How long do you plan to stay?
For the first six months I really wasn’t sure if I’d stick it out, but now my two children are settled in schools and have their Dutch passports I’m more deeply embedded. Besides, since the Brexit vote the UK has been turning into a museum to all the worst things about British life, so if I ever wanted to leave I’d have to find a third country.

Do you speak Dutch and how did you learn?
I’ve been learning Dutch since I met Magteld 25 years ago and I still haven’t finished. I studied German at university, so that gave me a head start, and did a three-week residential course with the Nederlandse Taalunie. But mostly I learned from informal sources: daytime soaps, Suske en Wiske comics, watching the news and just talking to people at family gatherings. It’s easier in the provinces because people are less inclined to switch to English when they pick up on your accent.

What’s your favourite Dutch food?
You can’t beat a properly done uitsmijter – bacon, eggs and cheese on soft white bread, with cherry tomatoes and gherkins on the side. Heaven.

How Dutch have you become?
I go everywhere by bike, I eat drop, bitterballen and raw herring, drink milk for lunch and obsessively collect supermarket stickers for cheap crockery that I don’t need. I’ve even joined the ANWB. But I still can’t cope with the Top 2000 or peanut butter and hagelslag sandwiches.

Which three Dutch people (dead or alive) would you most like to meet?
It’s an unoriginal answer, but Johan Cruyff revolutionised football as both a player and a manager. He made a lot of mistakes and argued with just about everyone, but he was never insincere or dull.

Jan Steen was a Golden Age artist whose wit was every bit as keen as his paintbrush – his satirical domestic scenes cover every human foible and have become a byword for unruliness, even though the humour is rooted in a deep moral conviction. Quintessentially Dutch.

Of today’s public figures I’d like to meet Lilianne Ploumen, one of the dwindling breed of Dutch politicians who believe the country can have a positive influence on the global stage.

What’s your top tourist tip?
Get out of Amsterdam and visit any of the historic smaller towns which are just as picturesque and a lot quieter – Delft, Haarlem, Leeuwarden and Den Bosch are all within easy reach.

Tell us something surprising you’ve found out about the Netherlands
It’s a much more authoritarian society than it seems at first. People take delight in filing their tax return on time, you can be fined for just about anything and every public space has a big list of huisregels posted by the entrance. I’m still amazed to see teenagers obediently queuing in the rain outside the supermarket at lunchtime. Subordination is instilled at an early age.

If you had just 24 hours left in the Netherlands, what would you do?
As a single parent I have so little time to relax that I’d probably just take it easy. Go round the Mauritshuis one last time, stock up on books at Paagman, then head to a beach café and stay there until the border police showed up and fined me.

Gordon co-hosts the DutchNews podcast every Friday. His book ‘All the Time We Thought We Had’ is published by Polygon and will be launched in the Netherlands book at bookstore Paagman on the Frederik Hendriklaan in The Hague on September 25. You can buy it online at the ABC or from other online booksellers.