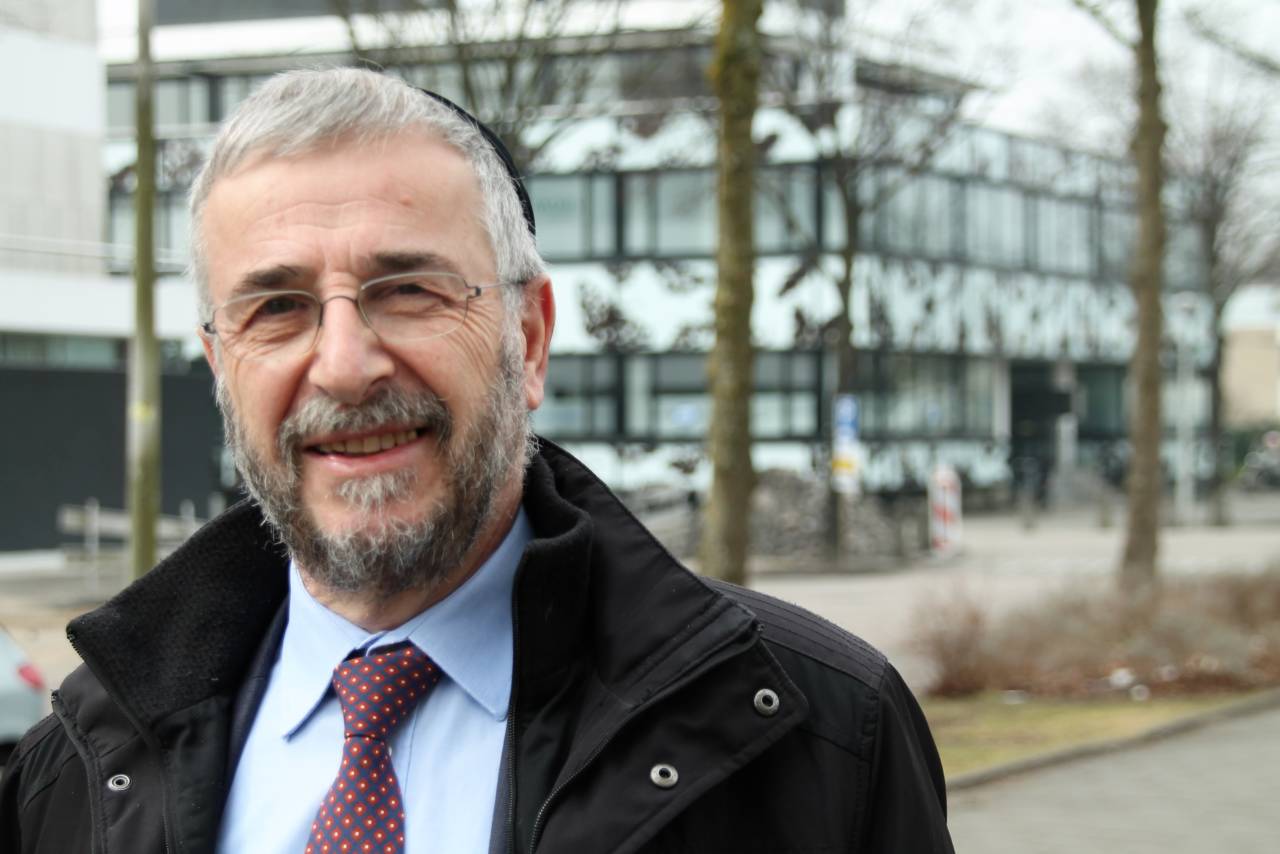 Attacks on a Jewish restaurant in Amsterdam, political parties signing a ‘Jewish Pact’ to protect the Jewish community, and a new report with shocking findings about increasing antisemitism in the Netherlands – amid all of the noise and hysteria, rabbi Lody van de Kamp has a different way of dealing with hate and discrimination. Laura Vrijsen went to meet him.

Lody Van de Kamp (69) is an Orthodox Jewish rabbi living in Amsterdam. Being the son of two Holocaust survivors, he is very much aware of the dangers of discrimination and the exclusion of certain groups in society. He wrote several books about the Holocaust, and he regularly visits schools to teach children about World War II.

More than this, the rabbi is involved in many projects aiming at building bridges between people from different backgrounds. He has particularly good connections within the Muslim community, and whenever he senses discrimination towards them, he is the first one to show his support.

I meet Van de Kamp on a Sunday morning in a hotel lounge in Amsterdam Zuid, an area with a large Jewish population. As usual, the rabbi shows up visibly Jewish, wearing a black kippa on his head. While he sips his black coffee, I asks him about the rise in anti-semitism in the Netherlands, and his perspective on it.

‘Anti-semitism has always been bad, and I guess it will always be,’ he says. ‘It has never been any different. When I walk on the street, people recognise me as a Jew. I only have to bump into the wrong person in the wrong place, and there could be real trouble.’

However, this does not only apply to Jews, he adds. ‘The same goes for other minority groups, such as Surinamese, gays, or Muslims. To me, there is no difference. Sadly, this is the situation.’

Shift to the right

Discrimination has always been there, but the increasing influence of the right has changed the political climate, says the rabbi. ‘And this change has made new space for discrimination and the exclusion of minorities.’

He is particularly concerned about Geert Wilders’ right-wing anti-immigration PVV. ‘The PVV gets away with the statement “Islam is deadly”, in their most recent campaign video. But 20 to 30 years ago this would have been unheard of,’ he says.

Van de Kamp is very sceptical about the attention right-wing parties like the PVV are suddenly giving to anti-semitism. ‘The fact that they care so much about anti-semitism has everything to do with the anti-Muslim debate.

‘When Geert Wilders visited the Jewish restaurant that was attacked a few months ago, it was not out of love for Jews, but out of hatred against Muslims,’ he says.

Van de Kamp believes the hysteria that arose after the attacks at the Jewish restaurant in Amsterdam are exaggerated. ‘There have been very serious terrorist attacks on Jewish institutions in Vienna, as well as in Brussels. In France hostages have been taken.

‘Here in Amsterdam, there was a refugee who smashed a window with a stick. Later on, someone else smeared dirty stuff on the window, and then a stone was thrown at it a few days later.’

The rabbi pauses briefly, giving the words some time to land. ‘Honestly, the fact that we can worry about such incidents, is a great luxury. For sure, there is enough reason to stay alert. But comparing this with Germany in the 1930s, as some people have done, really is based on historical ignorance.’

The rabbi warns of the danger of exclusion. ‘If one group knows best what it means to be excluded and what it can lead to, it is the Jewish people,’ he states. ‘It starts with exclusion, and it ends with destruction. So I think the Jewish people should be respectful enough to say that they will not let themselves be used for this purpose’

Currently, van de Kamp is actively engaged in projects to stop youngsters turning to crime and from becoming radicalised and has a close relationship with Said Bensellam, a youth worker with a Moroccan-Muslim background.

‘We speak with young people, often from a Muslim background, who are about to get into the criminal circuit. Our experience has been the same again and again: give those people a chance, listen to them, make sure they will also get a job,’ he says.

‘Then they are really not interested in getting into the drugs circuit, or fighting in Syria. These youngsters are constantly being excluded and driven into a corner. Politicians need to stand up for them, and help them to become part of society.’

Ironically, it was a Nazi salute that led the rabbi into this field. It happened eight years ago, when he and a group of Jewish students were walking in Amsterdam. A teenage boy saw them and demonstratively made a Nazi salute. The act was filmed and caused considerable commotion in the media. The boy was identified and put on trial. But before that, Van de Kamp went to talk with him.

‘It turned out that the boy, who was then 16, didn’t know anything about the meaning of the Hitler salute. And he wanted to do everything to fix what he had done,’ the rabbi said.

The boy asked the rabbi to stay in touch with him, and if he could take him to the Anne Frank house, where he had once been when he was 12.

‘So we went together to the Anne Frank house, where we spent several hours. He wanted to know everything. I remember the moment when we watched the video of Miep Gies, who helped Anne Frank’s family to go into hiding. After seeing that, he wanted to see the video again.

‘Eventually he said: “Mister Lody, when I did the Hitler greeting on the street, I thought I was cool. But what this woman did, that is really cool!”

So how does the rabbi himself experience walking around wearing a kippa? Are there any places where he feels unsafe? ‘If there is a pro-Palestine demonstration on the Malieveld in the Hague or the Museumplein in Amsterdam, then I would rather not cross it wearing a kippa. You always have to consider where it could be seen as provocative.’

However, Van de Kamp can often be found in western Amsterdam where the city’s Muslim community are largely concentrated and where he feels comfortable enough to walk with his kippa.

‘Not long ago, I walked in the Kolenkit neighbourhood together with an imam, who was wearing a djellaba. Suddenly, an elderly man approached us. He burst into tears and said “this is how it is supposed to be!” For some people it is still very special to see Muslims and Jews out walking together, even in this country.’