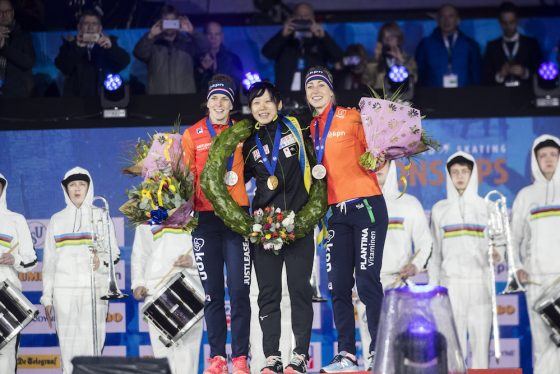 There are some things you just can’t avoid to really understand the Dutch and speed skating is one of them. Robin Pascoe went to see Sven (Kramer) and Ireen (Wüst) in action at the world allround championships.

Many years ago, when my children were small, we did the obligatory skating lessons at the Jaap Edenbaan ice rink in Amsterdam. This usually involved spending all day of the one-week autumn holiday at the rink, watching small boys and girls strap skates to their boots, don waterproofs and set off round the ice at breakneck speed.

After a year of watching little Svens and Ireens, I decided it was time to bite the bullet and sign up for the adult class which took place at the same time.

I bought a pair of ‘hoge noren’ speed skates and signed up for lessons. Eventually my years of Saturday mornings at the Silver Blades ice rink in Bradford attempting to learn how to do a half lutz were converted into something vaguely resembling the Dutch long glide – if you put your hands confidently behind your back, it looks pretty convincing to the novice. I’ve skated a couple of tours – when the ice is thick enough to follow a route of 10, or 20 or even 50 kilometres – and I get my skates out and look at them every time it freezes – as I did a couple of weeks ago.

Just one thing was missing from my skating education – attending a full on Dutch speed skating competition – so when I saw that the world allround championships were being held in the Olympic stadium in Amsterdam, what could I do but buy tickets?

Now, the Dutch being skating fanatics had snapped up all the bargain seats so we were stuck with the €70 tickets – given the fact that it rained most of the night and we were under the roof, we did get one advantage out of it. There was a lot of queuing involved – queuing to get in, queuing to get something to eat – the queues to the loos were so long we decided not to drink anything in case we needed to take advantage of that particular facility.

There was also a lot of orange about – shades of King’s Day in the orange hats, the face painting and the orange everything. The stadium itself was packed – a sea of orange with the odd nest of Norwegians in between. The mood was enthusiastic, hyped up by the stadium announcer and the constant boom boom boom of the chart hits blaring over the sound system.

The first event was the men’s 500 metres – which takes about 35 seconds a race – in other words, almost over before you’ve even noticed. You watch, somewhat bemused, the first couple of races and then it happens. Someone has noticed Sven is warming up. The crowd begins to roar as if he is a pop star. I have once attended a papal mass and witnessed the nuns screaming for the pope. This is pretty similar.

We can call him Sven. Everyone knows him. The presenter announces he will be in the outside lane. ‘Sven Krrrrrramer’ he booms, before listing all his achievements – which take longer to read out than the race itself.

It’s pretty much the same when Ireen Wüst takes to the track a while later for the 1,500 metres. She is the Netherlands most successful Olympic athlete, the announcer tells us several times. She has hundreds of gold medals… Like Sven, Ireen waves at the crowd and acknowledges her fans. They go wild.

The 1,500 metres is a better race length… a couple of the heats are actually exciting and the crowd is on its feet, roaring the leader home, despite the rain. Their orange gear has been covered up by yellow and green rain capes, thoughtfully provided by the organisers.

In between all this racing, the track, which is covered in rain, gets cleaned up a few times while the audience is entertained with oompah bands and some dreadful chap at a piano singing Queen and Meatloaf songs. The crowd love it. They are on their feet waving and singing along. I start to think I may have slipped into a parallel universe.

Next up is the men’s 5,000 metres. This is a race which takes over six minutes… which is quite a long time to watch two men skating round an ice rink – 12 laps and a bit extra in total. We get to worship Sven again. He’s just pipped at the post by Sverre Lunde Pedersen who is in the last race.

More work on the ice, more oompah music and then comes the final event of the evening – the women’s 5,000 metres. We already know that Ireen won’t retain her title, but we love her anyway.

We are all on our feet cheering when she beats Japan’s Miho Takagi at the finish, but we know Miho is the new queen of allround. And I have a sneaking feeling that Miho didn’t quite pull out all the stops, so that Ireen could celebrate victory in the 5,000 metres in front of her home crowd.

After that it is a mad dash for the exit so you don’t get caught in the queue to go home. We’re out before the prizes are handed out. I can’t take any more hyped-up Ireeeeeeeen Wüst and boom boom boom music. The men’s competition finishes on Sunday and I am quite happy to watch that on the telly.