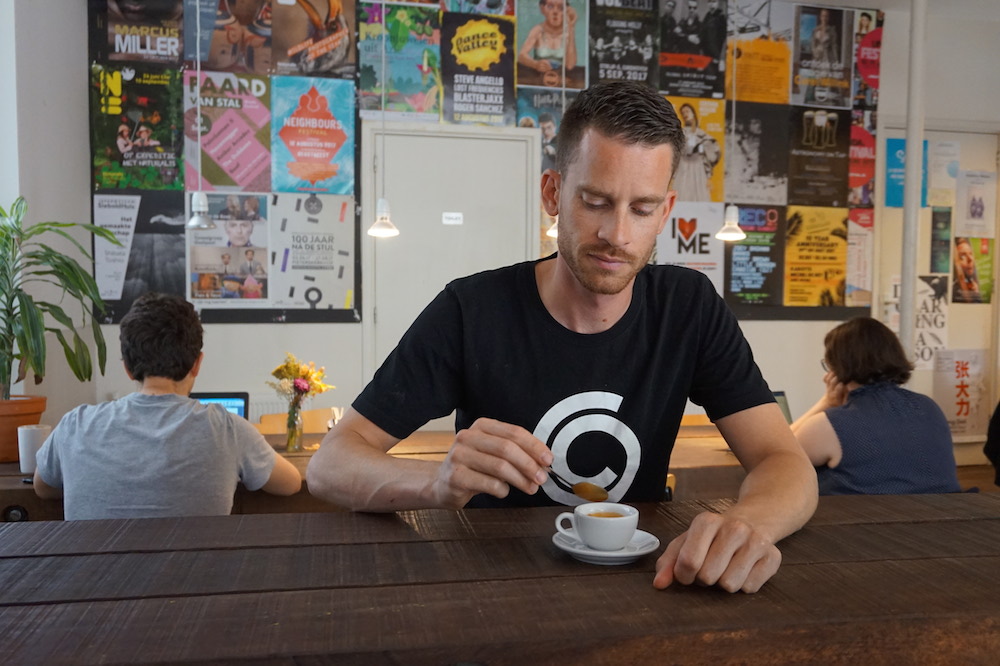 Toronto native Matt McNeil decided to forgo a career as a broker in Canada to move to the Netherlands with his girlfriend. They’re now the parents of a baby boy and he’s the proprietor of Coffee Company Leiden, one of the few North American-style coffee bars in the city.

How did you end up in the Netherlands?
Like so many other people: love. I was studying at the University of Concordia in Montreal and my girlfriend was there doing a half-year exchange. We met at the beginning of her trip and we were pretty much inseparable for the remainder. This was followed by a long-distance relationship that went on for four years. By that point I was out of school and I was working as a business broker, which is sort of like being a real estate agent but for businesses. Something had to change. She was in the middle of her master’s degree so I came over here. I eventually started working at Coffee Company in Amsterdam and things went from there.

How do you describe yourself – an expat, lovepat, immigrant, international?
I’ve been living here for nine years. I’ve adopted quite a few Dutch habits but, at the same time, I fly the Canadian flag all over the place. I’m very proud of where I come from. Even though I’ve only lived in Canada and the Netherlands, I guess I’d have to say I’m an international. I’m not a huge part of the expat community, aside from the cafe, which seems to be a sort of hotspot for expats in Leiden for some reason. I guess it’s because we were the first North American-style coffee shop in the city.

We were here before Starbucks, which is over at the train station. A lot of people, like international students or those here for a short time, aren’t going to get the opportunity to really integrate. This place is recognisable and comforting. They can come in, sit with their laptop and get a cappuccino, which is what they would do back home.

This is also one of the obstacles we faced in the early days. Going to a cafe by yourself was not really a part of the Dutch coffee culture. Going out for coffee was something you always did with another person. Some of our older Dutch customers or those from outside the city are still taken aback when we offer them take-away cups. They’re still so used to Douwe Egberts, that black sludge that’s so strong it makes your eyes pop out.

How long do you plan to stay?
That’s a big question. For the time being we’re staying here. The Netherlands has become our home. Moving again would definitely be a bigger thing now. We’ve got a dog, a cat and a son. There’s a lot more elements in our lives that would make it harder to move again. But our son doesn’t have to enrol in school until he’s four so now would be the time to go live somewhere else for a while.

Do you speak Dutch and how did you learn?
I took two courses. The first one was at the University of Amsterdam. It was very academic and devoted to grammar and sentence structures. It didn’t work very well for me. Then I took another course from the Learn Dutch Community. We would act out everyday scenarios like going to the supermarket or ordering something in a restaurant. It was more focused on conversations and certain words and then we’d build on that.

At one point my girlfriend decided to stop talking to me in English, which helped. Listening to the radio during my daily commute was also great. The morning shows have lots of talking segments and the DJs speak very clearly. Working as a barista in Amsterdam definitely helped, too. I became a sort of novelty for the regulars. I was ‘The Canadian That Works at Coffee Company’.

What’s your favourite Dutch food?
Vlammetjes. They’re hot, spicy, tasty, fried food. Bitterballen always burn my mouth. On the outside, they’re cool. Then you bite into them and it’s like flaming lava just poured into your mouth. No matter how many times I’ve eaten bitterballen, I always make the mistake of biting into them too early. With vlammetjes, I know they’re hot and the sauce that comes with them is fantastic. They’re an underrated bar food and harder to find, but well worth it.

How Dutch have you become?
I don’t think I’ll ever be fully Dutch because I’ll never understand some of the customs. Right now, I’d say I’m half-Dutch, based on the traits I’ve adopted. Put me in most situations and I can blend in pretty well. But the agendas? Those should be for doctor’s and dentist’s appointments, not for living your life. That’s too regulated. I threw out my agenda when I graduated from high school and I’ve been happy ever since.

Which three Dutch people (dead or alive) would you most like to meet?
Beatrix. She’s still so revered. When I first got here she was still queen and this sort of force that represented the Netherlands. No matter if people were republican or monarchist, they all respected her.

Mino Raiola. He’s a football agent who was born in Italy but moved to Haarlem when he was really young. I’m a big football fan and I’ve read these stories about him and the players he represents. He’s one of those people that, if you’re in his ‘family’, he loves you unconditionally, but if you’re not: get out! There’s stories about Mario Balotelli calling him up and asking: ‘can I borrow your Bentley’ and Raiola saying: ‘yes, OK’. Or showing up to important meetings in a tracksuit. In the world of football, he’s a phenomenon.

Escher. You look at his paintings and they’re so perfect. I’m a big fan of realism in art and it’s amazing that artists like him can completely replicate real-world things. Take, for example, his self portraits where he’s reflected in the glass ball. The perspectives he used were great. Then there’s the other paintings that make you wonder where he got his inspiration. How did his mind come up with those crazy and amazing things?

What’s your top tourist tip?
I think it would have to be Amsterdam but that’s hard. This country has things for everyone and it depends on the person. Some people are huge art fans so I would send them to the Rijksmuseum. If they’re sports fans, I’d send them to the old Olympic Stadium. But if I had to choose only one thing for everyone, even though it’s super touristy, I would say they should take a canal cruise at night. Amsterdam looks so much different after dark and, from the canals, the perspective is something that no other city on the planet can provide. There’s lights from the houses, the buildings, and the bridges that are amazing. Then, if the boat goes down into the Red Light and it’s a Saturday night, there’s this noise that the crowds make and it’s – well, it’s an experience.

Tell us something surprising you’ve found out about the Netherlands
Having to buy cake for other people on your birthday. It’s my birthday: you guys should be buying me cake! I shouldn’t have to show up to work with a cake for everybody else. Birthdays in general and the parties where everyone sits in circles are strange. Having to enter a room and kiss dozens of people before you even get to sit down and then kiss them all again when you leave? No thanks. I prefer to just say ‘hi’ ‘to everyone and ask them ‘where’s my cake’? The rituals associated with birthdays make no sense. What’s up with the birthday calendars and why do people put them in their washrooms? I still don’t know the answer.

If you had just 24 hours left in the Netherlands, what would you do?
I would probably do as much as I could. In this scenario, I would hope it’s summer so the sun would set late, giving me more time. I’d wake up in the morning, go somewhere for coffee, sit in Vondelpark and read a book, meet friends for lunch at a waterfront cafe, take a boat ride in the evening, and make the most of it. Then I’d get all our friends together at a cafe, sit on the terrace, and drink beer until we all wobbled home on our bikes. I’d pack as much in as I could so, once I left, I could say, ‘there, I’m done’ and leave with no regrets.

Matt was talking to Brandon Hartley. He regularly posts photos and information about his branch of Coffee Company on Instagram and the cafe’s Facebook page.