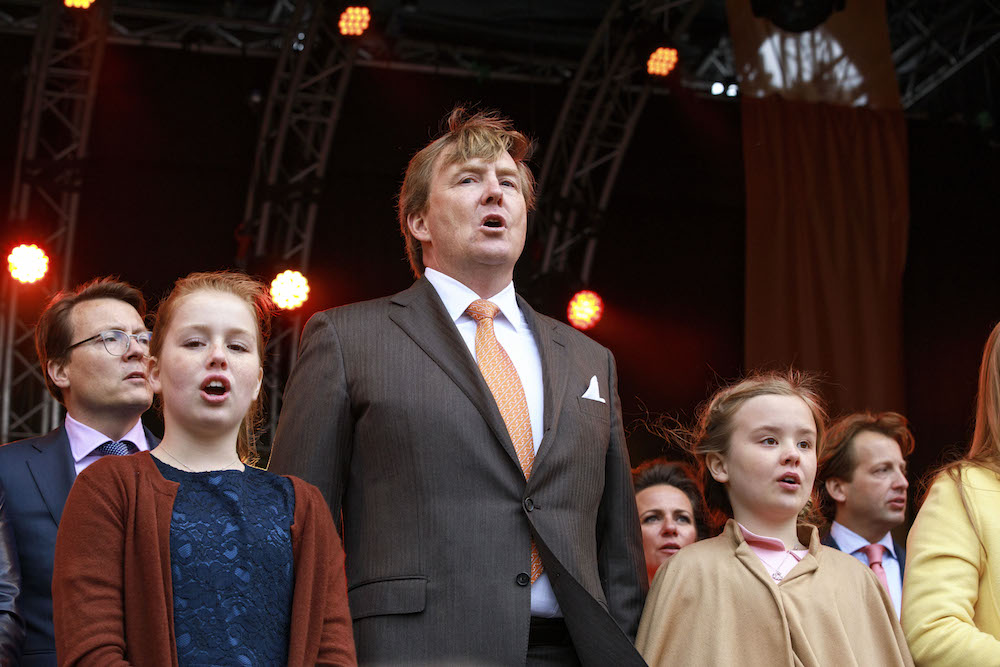 King Willem-Alexander and other members of the royal family singing the Wilhelmus. Photo: Dolph Cantrijn/Hollandse Hoogte

Suggestions that the next government might make lessons about the Wilhelmus part of the Dutch school curriculum led to raised eyebrows and considerable criticism earlier this month. But then, as Ryan Walmsley reports, the world’s oldest national anthem is steeped in heritage, myths and misunderstandings.

It’s the 1570s. Spain is in the midst of a golden age after conquering the mighty Incan and Aztec empires. Silver, gold and other treasures from the New World are flowing into the Spanish Hapsburg’s coffers through newly-opened oceanic trade routes. King Phillip II rules over a formidable and extensive global empire.

But for Spanish interests in continental Europe, things are starting to unravel. Religious unrest, brewing in the Netherlands since 1566, led a famous nobleman named William of Orange to lead a revolt opposing the unbridled persecution of Calvinists and the inefficiencies of some Spanish governors. Against this background, and in ode to their leader, the world’s oldest national anthem Het Wilhelmus was penned.

Although the genuine author is wrapped in mystery, Wilhelmus is written from the point of view of William. The structure is complex and symmetrical, with each stanza having a related partner on the other side: the first and last verses emphasise William’s loyalty, while the second and penultimate highlight religious devotion. The anthem is also an acrostic, meaning the beginning letter of each fifteen stanzas spell out the name William van Orange.

Since its official adoption in 1932, the length of the piece means that usually only the first verse is sung. A decade later, under Nazi occupation, the sixth verse was popularised by resisters, with the last two lines reading: ‘And drive the plagues that try us, And tyranny away’. The anthem was adopted by all Dutch – even the anti-monarchist socialists – and helped to unify the nation.

But Wilhelmus might hide a more chequered past. One legend asserts that during the gruesome torture of Balthasar Gérard, William’s assassin, guards sang the anthem to drown out his screams. Another rumour claims Dutch sailors, mocking the warning shots fired by their English counterparts, sang Wilhelmus during a tense encounter in the North Sea. Upon finishing, captain Maarten Tromp fired on the English flagship, beginning the first Anglo-Dutch War.

Rumours aside, Wilhelmus has a long history of controversies and misunderstandings. The the first verse is often a cause for confusion, where William seemingly speaks of his German blood and professes his loyalty to the King of Spain. Why would the author, speaking as the father of the Dutch independence movement, want to highlight his loyalty to Phillip? The answer lies in the structure of society at the time and the ‘divine right of kings’ argues Jan Burgers, specialist in medieval history at the University of Amsterdam.

‘At that time, most people were convinced that society, as it is, was ordered by God’,  Burgers says. And so it was extremely uncommon to question a monarch’s authority, as the King was ‘set by God to reign the land, and to stand up against the King was felt by many as heretical’. Unlike today’s European monarchies, a ruler in those days held absolute, unquestionable authority. They were not accountable to any legal constitution, or anyone other than God.

What’s more, a lot of the popular discontent centred on the incapable (and often oppressive) Spanish governors, rather than the King. By stressing William’s longstanding allegiance to Phillip, he effectively shifts the criticism onto the administrators, and does not question Philip’s ‘divine right’ – a highly unorthodox act.

Another controversy concerns William’s origins. A direct translation of the original text refers to William as being ‘van Duitsen blood’. Today in the Netherlands, the word Duits is used to reference anything relating to Germany, and it can come as a shock to hear the narrator, the patriotic symbol of the Netherlands, speaking of his ‘German blood’. However, this view rests on a historical misunderstanding of the word Duits, says Thijs Porck, lecturer in historical linguistics at the University of Leiden.

‘Duits, as well as the English variant Dutch derive from a word that meant people or folk’, explains  Porck. Old English, along with Middle Dutch: ‘are known as Germanic languages, and were spoken by the people who lived in North and Central Europe’. Anyone in this vast area not speaking Latin (which would have been almost everyone outside the Church), would be said to have used diu diutisca zunga, or ’the language of the Germanic people’.

Porck says the confusion around William’s heritage is a recent development, as only in modern language has the meaning of Duits narrowed to refer exclusively to Germany.
When the Wilhelmus was composed: ‘the Dutch word Duits could have referred to Dutch, modern-day Germany, or simply of the people’.

The historical context supports this argument. The nation we now know as ‘Germany’ would not exist for hundreds of years, and simply did not exist in the collective imagination of people at the time. During this period ‘Germany’ was a patchwork of loose, interconnected peoples and states. William would have been referring to a large stretch of territory including Central Europe, Denmark and the Netherlands.

Amongst its most famous enigmas, the author of Wilhelmus is unknown and has always been fiercely debated. For years, many assumed it to be Philips of Marnix, the mayor of Antwerp and a close friend of the House of Orange-Nassau. The changing of certain vowels in order to pair them with others is, however, very different from the mayor’s style of writing. Last year, the debate over the authorship of Wilhelmus was blown wide open by a team of Dutch researchers using advanced computer analysis techniques.

‘Our model is called the imposters method’ explains Mike Kestemont, a researcher on the project from the University of Antwerp. ‘This method for authorship verification will compare an anonymous document to a document written by a known author’, before comparing these findings with a large database of ‘imposter’ authors whose styles are similar to that of the Wilhelmus.

From this, it is possible to build a statistical database of different writing styles used by each author, and check for similarities between these and the style of Wilhelmus. Things like word frequency, word patterns, and the frequency of conjunctions are all taken into account. After analysis, the findings presented a strong connection to a previously overlooked candidate – named Petrus Datheen.

‘Petrus Datheen was a Calvinist theologian from the West of present-day Flanders’ says Kestemont. ‘He enjoyed good contacts with William of Orange’, and was present at the Siege of Chartres: ‘where he could have picked up the melody for the Wilhelmus’. Although it is unlikely we will ever know for sure, this new method has shown remarkable similarities between Datheen’s style and the anthem, far more than candidates posed by previous historians.

Whoever the author, the text’s advocacy of religious liberty, and its symbolic meaning during Nazi occupation, stand as a testament to Dutch unity and multiculturalism. The recent discoveries show that the world’s oldest national anthem is an example of a core belief in Dutch culture: when an ancient society embraces new technologies, it can uncover important new ideas.