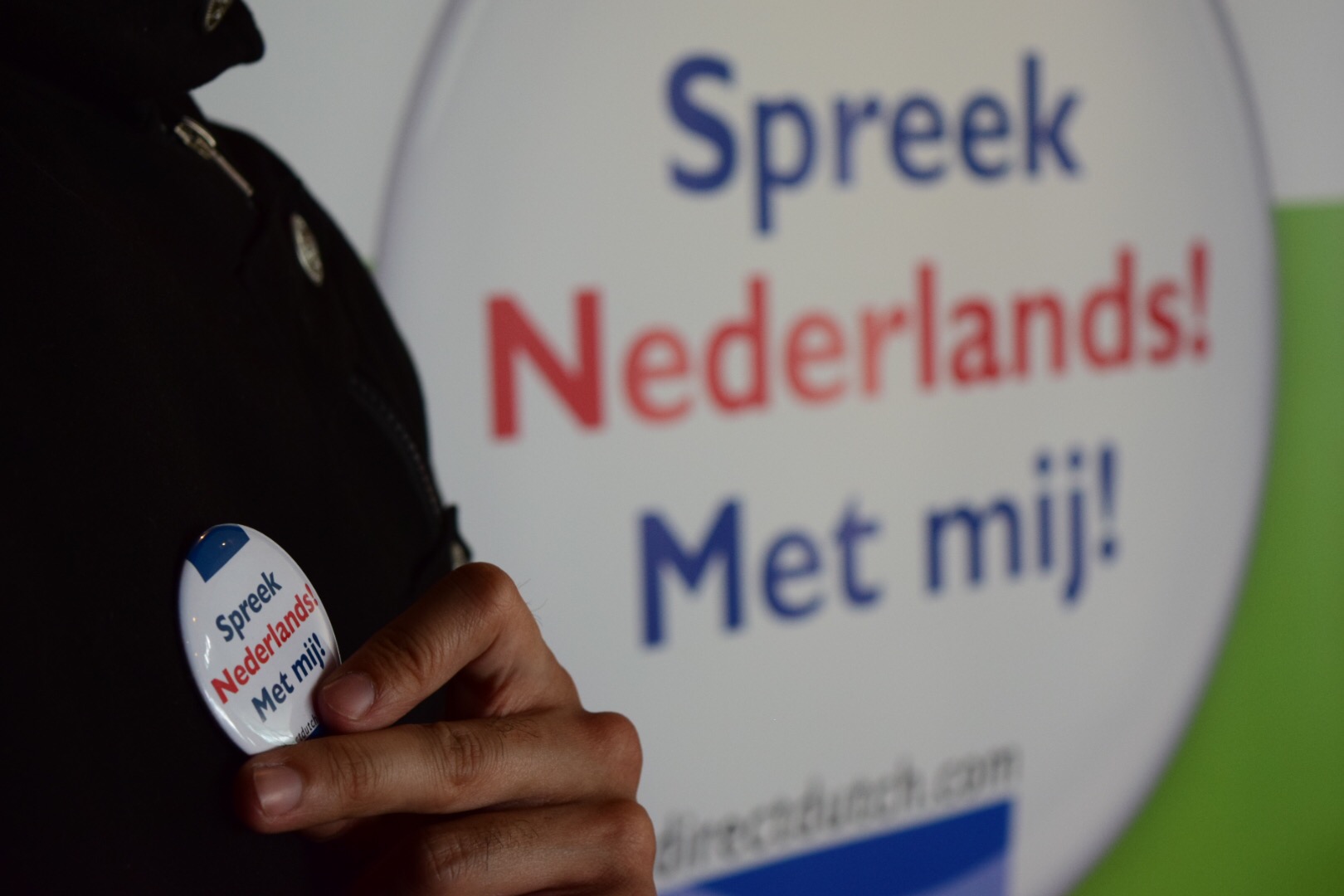 The Netherlands’ enthusiasm for speaking English leaves many newcomers struggling to learn the language. Could wearing a badge insisting on Dutch shake things up? Deborah Nicholls-Lee tries it out.

‘Ah, it’s you, David!’ I sigh with relief as one of the two British hairdressers in the team of four picks up the phone at my local salon. No need to speak Dutch then.

I have been in the Netherlands eight years and this wimpy attitude to speaking Dutch is hard to defend. My Dutch isn’t too bad and it’s time I got the bitterbal rolling.

Founded in 2013, and billed as a chance to ‘fight for our right to speak Dutch’, the initiative is a response to the frustration felt by newcomers whose attempts to speak Dutch are thwarted by locals who insist on replying in English.

Phone conversations aside – where the absence of visual cues and sympathetic smiles make the job ten times harder – I generally make a lot of effort to stick to Dutch, even if I feel a bit uncomfortable. But I’ve noticed that the Dutch proclivity to answer in English has left my listening comprehension lagging way behind. Could a cheeky little badge change that? I put it to the test.

First up on my week of badge-wearing is the hair appointment that I booked in cowardly English a couple of weeks back. It is a three-hour stint with my Dutch hairdresser to highlight, wash, cut and blow-dry my tired-looking hair. I had better brace myself.

Richa is enthusiastic when she sees my badge. She claps her hands together: ‘De enige manier om het te leren!’ (The only way to learn) she exclaims; and rather than dipping in and out as we normally do, we stick to Dutch for the duration. As well as discussing our various holidays – a favourite topic across salons worldwide – we cover parenting, immigration and health; and it’s all rather lovely. Afterwards, I feel all sort of glowing from the achievement – and my hair looks better too.

‘Heel goed, dit!’ (This is great!), says one parent at school drop-off the following morning, grinning at me and tapping my badge appreciatively. ‘Anders leer je het nooit!’ (Otherwise, you’ll never learn). It seems like the Dutch are really on board with this challenge.

But would those parents who seem hard-wired to answer me in English also play along? At pick-up, a bland comment of mine about the weather is batted straight back in English, but the parent is brought in line when I do a brisk tap, tap, tap on my badge, and we proceed in Dutch.

The badge makes me question some of my own practices too. I catch myself clicking on the NL/EN button for English when doing some online banking and click back guiltily.

And what about other non-native speakers of Dutch, do they have to muddle through too? On Thursday, a Spanish neighbour turns up to collect a parcel. He answers my Dutch with English and I don’t have the heart to force him to switch. Is that cheating?

After a while, I stop noticing the badge and insisting on Dutch becomes more automatic. People are happy to play along and my Dutch is improving too.

On the Friday, I have a birthday party to attend. Rather than slowing the conversation, the badge – and its requirement for Dutch – makes a nice talking point. I learn a great new verb: bagatelliseren (to play down, trivialise) – a hefty six syllables that is sure to impress my hairdresser at our next appointment.

The following week I leave the badge at home. No more pin pricks in my clothing; no more pointing and grabbing at its shiny little shell. It sits in my key tray in the kitchen, gazing up at me dejectedly.

On the way to school, I strike up a conversation with a parent from the birthday party. He says hello in English and I reply in Dutch. He then apologises good-naturedly, says he remembers my badge from last week, and continues in Dutch. I feel really encouraged by this.

The parent from the previous week, who had me tapping on my badge, now speaks to me in Dutch on the phone and in person. ‘I’m really trying to talk in Dutch to you, after I saw your button the other week,’ she says, lapsing momentarily into English. It’s working. Sort of.

Do as the Dutch do

Though the badge has now been put away, the effect has endured. Its cheerful little message has signalled to my neighbours that I am serious about learning their language, and it’s got newcomers and locals rethinking the way that they speak together too.

I have learnt that if you want Dutch people to speak Dutch to you, you must do as they do, and state what you want clearly and directly. Even if it means wearing a badge.

Spreek Nederlands Dag  is on Saturday July 1. Events will be taking place in the Central Library in The Hague. Free badges can be ordered here. info@directdutch.com