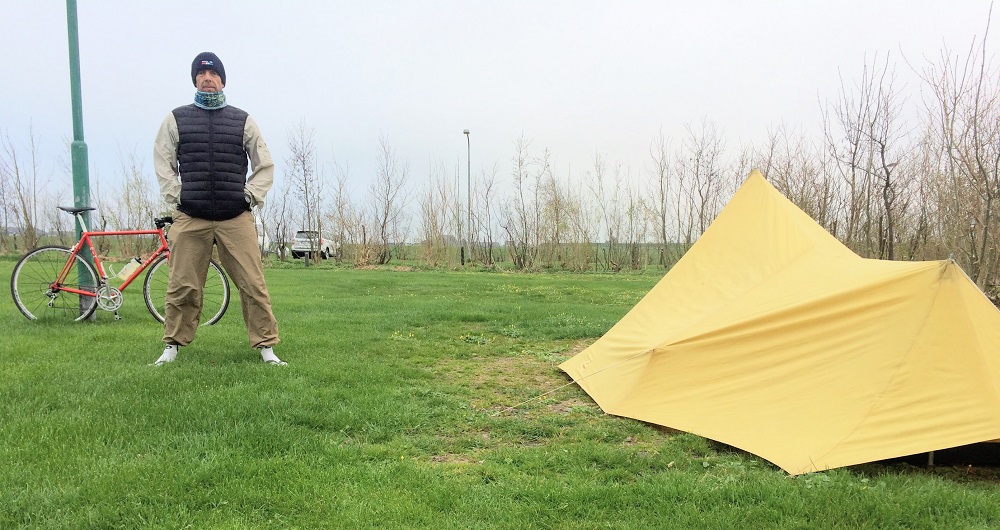 Bikepacking is a new cycling trend. It’s basically lightweight touring/camping on a mountain bike or racing bike using the latest generation of bags which don’t need carriers or racks.  Mike Cooper went on a bikepacking trip through Noord Holland and Friesland

The great whites were following me. There were eight of them. They were big. I wasn’t nervous, I was enjoying their company. One thing about long-distance solo bikepacking: alone is the default.

Great white egrets, herons more common to the Ukraine than to the Netherlands, are welcome company along the endless Houtribdijk, heading north out of Lelystad into an icy headwind towards Enkhuizen and fietsknooppunt 12. It was day two and I was fast running out of fuel.


My brief journey in early spring took three days and two nights. North from Haarlem to Den Oever, over the Afsluitdijk, south around the Frisian coast from Zurich to Lelystad, over the Houtribdijk, around the coast to Hoorn and across back to Haarlem: all using the ingenious Dutch fietsknooppunten system to navigate.

Known variously in translation as ‘cycle junctions’ and ‘bike nodes’, those little white signs with a bike logo, arrows and green numbers in a circle can get you virtually anywhere if you have a bike, a map, a vague sense of direction, and are okay with the feeling of being totally lost most of the time.

Sure, there’s an app called fietsknoop but I found it difficult to use on the road due to the sun (no, really). But there’s also the Netherlands’ strongest bike map. This ruggedised chart is marketed as De sterkste fietskaart van Nederland and published by Buijten & Shipperheijn. It was my Brienne of Tarth: my truest and hardiest companion. It has many (but not all) of the bike nodes marked. 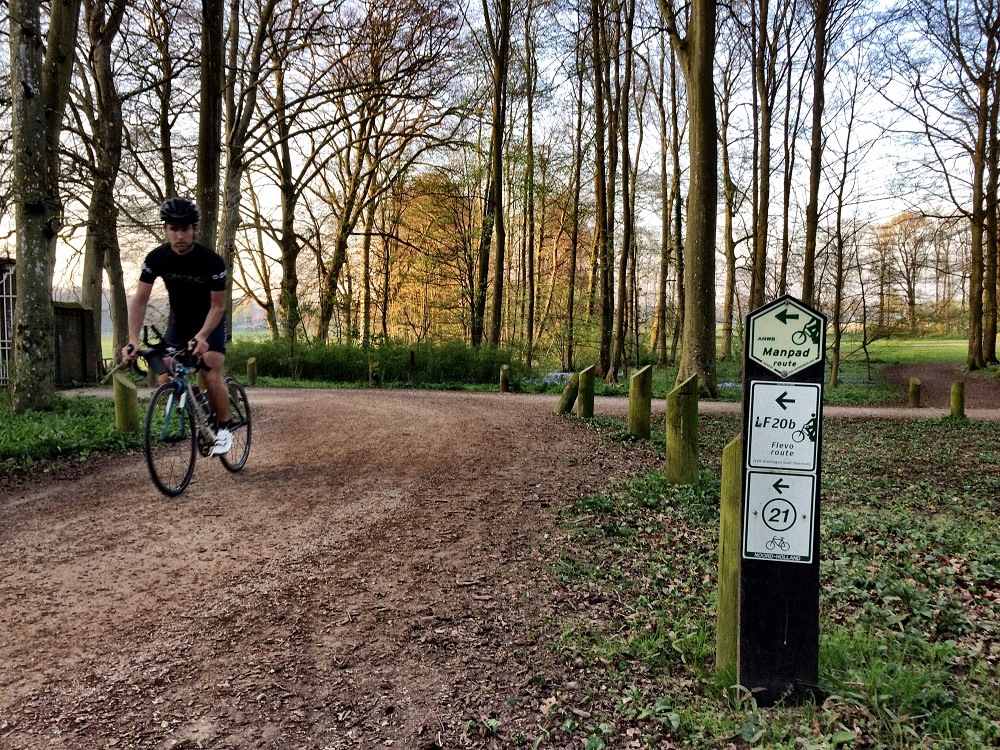 Thanks to a sudden rare burst of decent weather in early April I packed up and set off northwards. Campsites in NL are mostly closed up until April, so the timing was opportune for some hardy overnighting.

The journey began in the Kennemerduinen National Park. This undulating duned nature reserve is mostly populated with grey-haired couples aged around 60 riding electric bicycles two abreast. If you are fortunate to visit the park at a time when these creatures have not emerged, then one can also see pristine dune-scapes, wisent bison, wild ponies, Scottish highland cattle and a decent amount of bird-life. The coastal air is particularly crisp here.

The cyclepaths through the dunes are all well-marked with nodes. The trick is to remember the next four numbers: the ones you need in the coming half hour or so. There appears no rhyme or reason to the order (which no doubt does exist) as your route will cut through a multitude of node sequences. I found myself repeating mantras: ’12, 47, 48, 5,’ and so on. Having map or app on hand at all times is an essential part of node navigating.

From the dunes of the west coast I headed east and inland through the suburban sprawl of Noord Holland. From Alkmaar to Middenmeer the real estate was relentless. At times this gets full-on Truman Show creepy (neighbours simultaneously pressure-hosing their driveways next to each other, grinning wildly) but once through the village of Winkel, things get rural again.

When going long-distance on a bicycle have food, snacks, ample sugary drink at the ready, especially when the weather is chilly. Your body uses energy first to heat you up, and then to power you along. And if you ever cycle across the Afsluitdijk eat well in advance.

During the traverse you are basically cycling behind a dyke, alongside a motorway in the sea. All the vehicles except for you are swooshing along at around 130 kph.

‘The great thing about cycling in the Netherlands is that it’s mostly all flat,’ is certainly true. But this also means you have to pedal all the time. All. The. Time. And no more so than on the Afsluitdijk.

The dijk is a 32-km-long straight line. On sunny days, the cycle path in the distance disappears into silver pools of fata morgana. You pedal on and on, yet appear to get nowhere. Then you realise you have no energy left and find yourself grabbing for muesli bars and other confectionary, desperate as you are to keep the legs grinding along. On a bad day, with a headwind, it could take you two hours to traverse this engineering miracle and symbol of Dutch Soul. Be warned.

On finally reaching the other side, I rushed to Routiers Restaurant Zurich (who kindly allowed me to park my bike inside their entrance hall, next to the Fietsers Welkom sign) and gobbled down an 3-fried-egg and bacon uitsmijter, apple tart and coffee. Thence, energized, a further 24 kilometers south to Camping Hinderloopen, the first night under canvas. 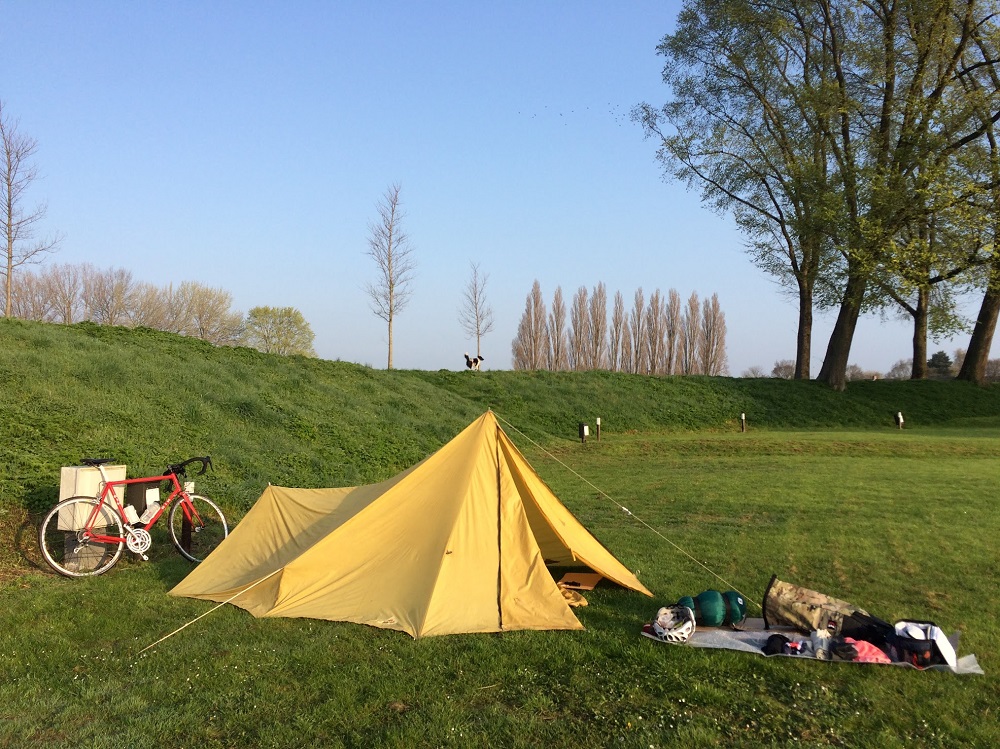 First conclusion after climbing into the tent: bubble-wrap may be compact, but it’s rubbish as an insulator against freezing ground. Second, after 167 kilometres in a day and a couple of beers it doesn’t matter: you sleep. I had been in the saddle for almost seven hours and burnt some 2,500 calories. The solar-powered light/powerbank by WakaWaka had been soaking rays all day and it was time to feed the phone. Mine was the only tent at the campsite.

The following morning at first light skylarks began to sing high above the encampment. I packed up my gear and headed to the campsite mini-mart where the coffee was hot. By contrast, Friesland (Freezeland) was cold that day. Frigid sea mist permeated the air and I got going as quickly as possible: once the legs creak back into action the body soon generates some heat.

Stavoren, Laaksum, Oudemirdum, Nieuw Amerika, Lemmer: the Frisian place names have an exotic ring. None more so than Urk. Formerly an island dating back from the 10th century, Urk has an insular reputation: ‘there are strangers, and there are Urkers’ the local saying goes. The strangers are brought into the world by storks but Urkers come from Ommelebommelestein, a rock in the IJsselmeer. I did not stop there. I continued south to the Ketelbrug and there I saw the body of a dead man.

A water police boat with a hoist had just lifted the dead man out of the water, which pured from the stretcher-like canvass harness. His feet dangled lugubriously. I continued on my way, being ushered to do so by the police team. I reflected in silence. Later I read that the man had been missing for some weeks, his car abandoned, a suspected suicide.

Sometimes you lose your fietsknooppunten completely. This being the Netherlands, you can then simply refer to the normal, utilitarian cycle path signage. These signposts with red lettering on a white background provide more direct, less scenic directions and are a perfect fallback option when you lose your nodes. 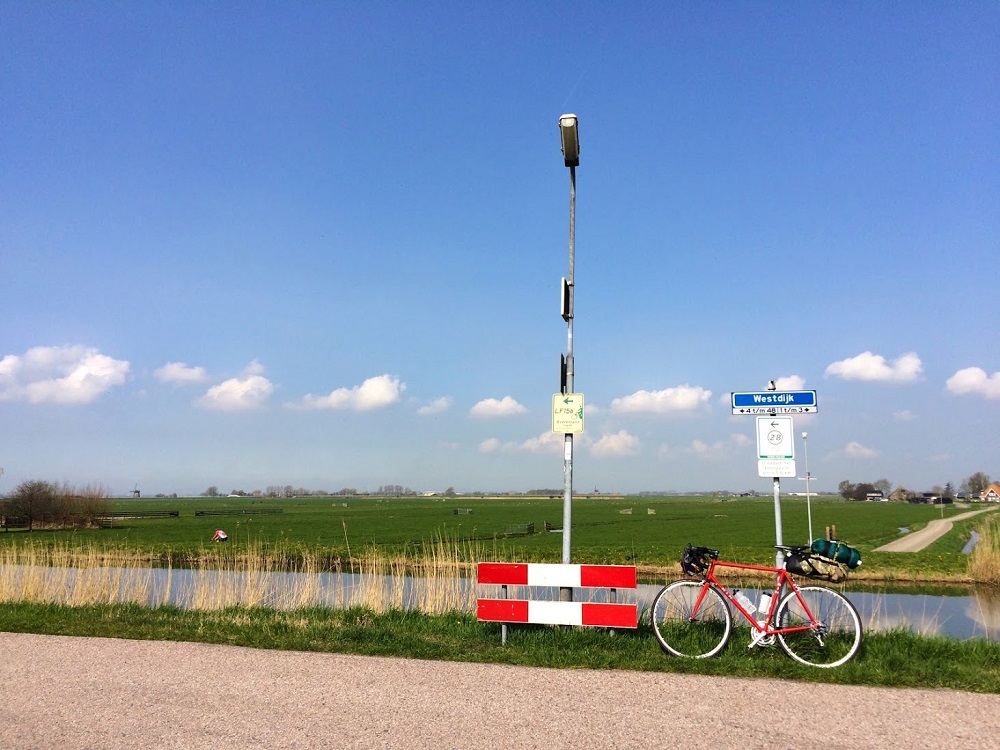 I followed the red-lettered signs to Lelystad and soon picked up the nodes again and headed from 34 to 12: the second insane dyke: the aforementioned Houtribdijk which is just under 30 kilometers long and marks the border between the IJsselmeer to the north, and the Markermeer to the south.

Here you cycle closer to the water than on the Afsluitdijk which makes it far more scenic but also more exposed to the weather. Wind and sun today. While the uncommon great white egrets (whose pristine feathers were used as ornaments by knights of yore) were a pleasant surprise, more common courting couples of great crested grebes and gadwall and distant brown-sailed boats also distracted the eyes pleasingly from the hard work being put in by the legs.

Upon reaching Enkhuizen I had had enough for the day. The dyke had sapped all energy reserves and I pitched my tent at the municipal campsite at the northern edge of this old harbour town once more important than Amsterdam. After another huge uitsmijter and a sun-soaked beer, I bedded down and, due to the semi-public nature of the campsite, took the wheels off the bike and put frame and wheels in the foretent.

Bright sunlight and the ‘pok’ of a tennis ball hitting my tent woke me up. The ball had been thrown by a dog-owner not yet used to the campsite being used. She was very apologetic.

I set off and almost immediately suffered my first and only puncture of the trip. A spare inner tube means no messing about with roadside repair kits, and once the new tube is installed, one brief, near magical whiff from a CO2 cartridge pump and the new tyre is instantly inflated. 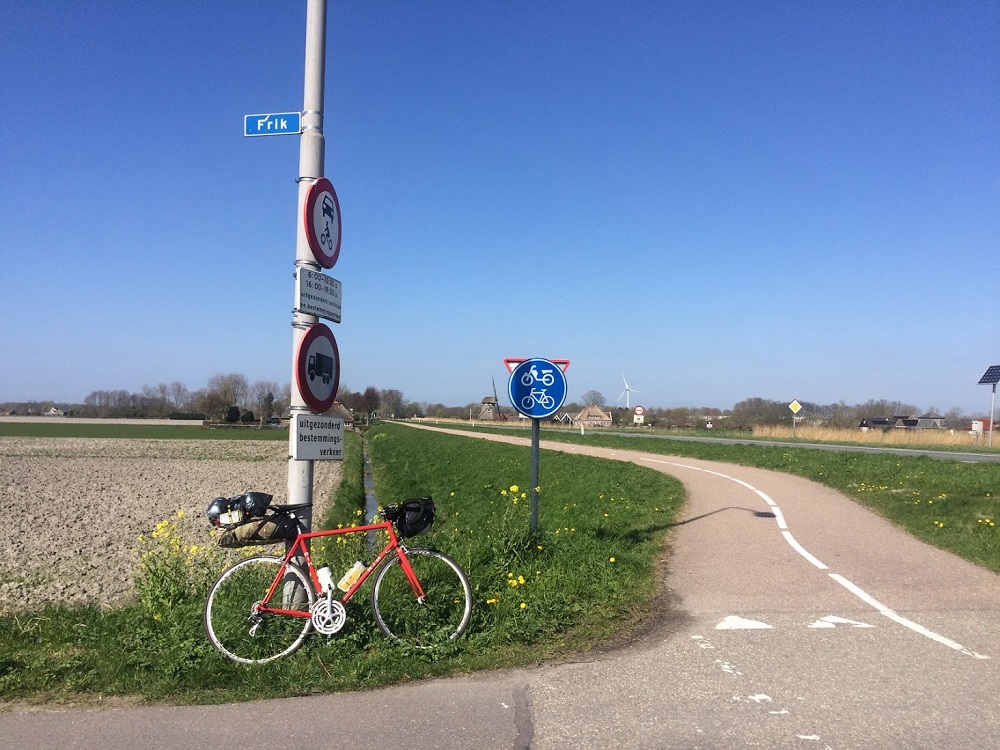 The coastal route from Enkhuizen to Hoorn was certainly the prettiest scenery on the tour. From up on this meandering, historic dyke you see the Markermeer to the left, and marshy waterways punctuated by smallholdings to the right. After Hoorn it is time to head inland again. But first pass by De Hulk: just because of the name.

Straight lines in the sun (even the clouds are lining up today), and the final stretch of Dutch countryside from De Hulk to De Rijp is warm and inviting. I try to set a fast pace. I am now very tired and will be happy to get home.

When you get over-tired that’s when you really get lost, and this route went very pear-shaped between West Knollendam and the ferry to Spaarndam. Extra time, kilometers and energy were all spent trying to work out where the frik I was. This time neither knooppunt nor red-letter signs were helping. I resorted to analogue compass and headed due south, regardless. Somehow I then ended up where I needed to be: amid a group of French tourists on e-bikes crossing the North Sea Canal on the gratis ferry. From there it was a short jaunt back to Haarlem.

You really don’t have to grind hundreds of kilometers to enjoy a cycling trip in the Netherlands using fietsknooppunten. Any short trip out of your comfort zone will be enhanced by following the green signs. Download the app, pack a boterham and pedal off. May the fiets be with you.