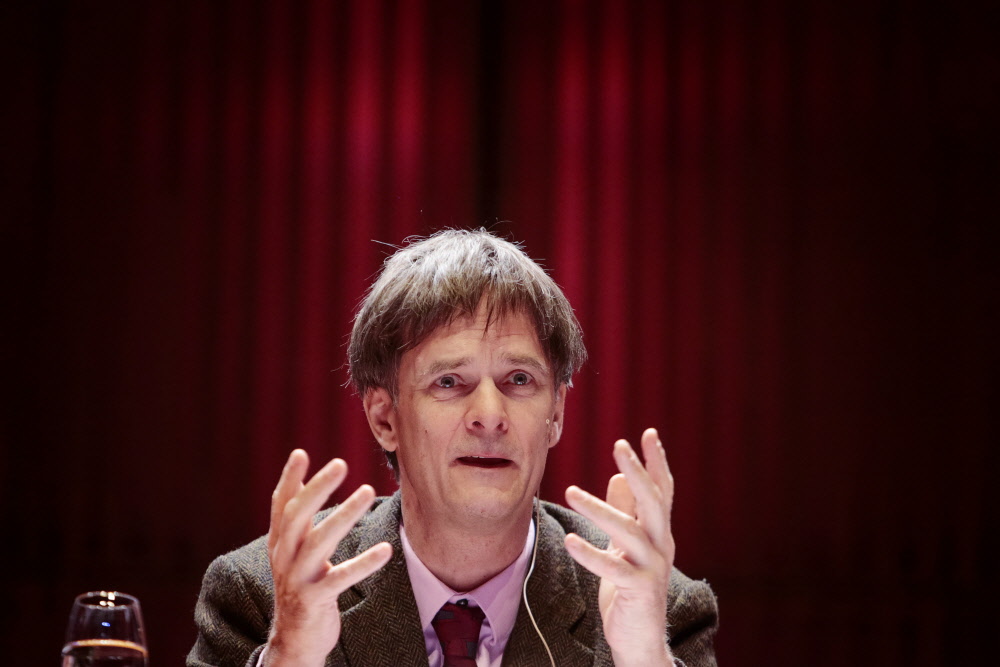 The election in March presents Dutch voters with an unprecedented choice, says former Labour minister and economics professor Rick van der Ploeg. This is, he says, is a choice not just between parties or policy platforms, but between irreconcilable forms of reality, as Gordon Darroch reports.

Welcome to democracy in the age of post-truth politics and alternative facts. ‘The Netherlands used to be very rational with scientifically oriented, evidence-based policy, but that’s now shifting towards being just an opinion,’ says Van der Ploeg. ‘You might have researched something for 20 years, but now people say I’m sorry, but I have a different opinion.’

That difference is fundamental in the Netherlands, where parties faithfully submit their election manifestos to be evaluated by the government’s economic planning bureau CPB. The agency crunches the numbers and forecasts the effect of their plans on the economy to within a tenth of a percentage point, and the figures are influential in election debates.

This year three parties – Geert Wilders’s PVV, 50Plus and the animal rights party PvdD, refused to take part in the exercise, with Wilders denouncing it as ‘idiotic’ and claiming the CPB lacks transparency. When the CPB claimed 50Plus’s plan to restore the retirement age at 65 would cost €12 billion, Krol came out with his own figures which showed the amount to be €22 billion less.

‘It’s a huge departure for the Netherlands,’ says Van der Ploeg, an economist and former Labour politician who in his career has been an academic, an MP and a junior cabinet minister. ‘It saddens me enormously as a member of the academic community. It basically means evidence-based policy no longer works.’

It also, he says, goes a long way to explaining the appeal of parties such as the PVV, which portrays the postwar consensus as a self-serving elite enriching itself at the expense of ordinary people. ‘It’s broader than just anti-Islam: it’s anti-expert, anti-establishment, anti-European bureaucrat, anti-scientist, anti-cultural elite. It’s an insurrection of ordinary people, and they seem to have found their voice with people like Wilders.’

The Wilders effect has spread to other parties, notably the VVD, with its newspaper adverts telling people to ‘act normal or go away’. ‘It’s very un-Dutch, very un-liberal and very un-VVD,’ says Van der Ploeg.

‘The VVD isn’t a conservative party, it’s almost a libertarian party, and when Rutte started out he was indistinguishable from D66, so he’s changed its agenda. You see the same thing in the Labour party with Lodewijk Asscher, who’s a bit of an old-fashioned disciplinarian who’s taking on the issue of immigrants within Europe, the Romanians undercutting the minimum wage, so he’s trying to find his way of taking part in this rhetoric.’

The mood of revolt partly reflects the failure of politicians to come up with adequate answers, Van der Ploeg concedes. ‘If everything is evidence based then all the parties look alike, and it’s true that the neoliberal consensus of free trade, free migration, one currency, particularly technology hasn’t really worked out that well for working-class families.’ But rejecting the whole basis of rational policy-making is a ‘very dangerous’ step. ‘Once the ghost is out of the bottle it’s very difficult to get it in again,’ he says.

Politicians will only make the problem worse if they resort to short-term fixes on issues such as immigration, Van der Ploeg insists. ‘People see these new people jumping the queue for social welfare, for housing or for jobs. That’s what they’re fed up with. But I think what’s really going on has more to do with technology. Machines will soon be able to able to take away the jobs of even highly educated people – lawyers, estate agents, notaries, architects, doctors.

‘Google is now better at diagnosing than the average doctor. I think it’s an important long-term issue. But that’s not what the rhetoric is about, sadly. We need it to be about long-running things like the environment and what we do about these huge technological revolutions that threaten the way we organise our work and our lives, and even politics itself. But the truth of the matter is that these discussions about long-term issues are swamped by the issues of populism and migration.’

A similar problem is afflicting Europe, which is still finding its bearings after the Brexit vote. As a pro-European, Van der Ploeg says the EU needs to reform rapidly and decisively to survive the impact of Brexit, by scaling back its bureaucratic structure, introducing more direct democracy and giving power back to the member states. His concern is that Europe’s leaders are unable to grasp the danger they face if they fail to seize the opportunity.

‘The establishment don’t see it. They don’t get it. If Timmermans and Juncker had come up with an alternative plan, such as cutting down Europe by a factor of 40% and having more democratically chosen leaders – not just lip service but really trying to do something – it might well have been the case that Britain would have stayed in the EU. What you need to do to vex the populist beast is to trim down Europe to things that are really essential and not do anything that can be done by the member states.’

Van der Ploeg’s political career spanned the eight years of Wim Kok’s two Labour-led cabinets, first as an MP and finance spokesman for the PvdA between 1994 and 1998, and then as junior minister for culture and media until 2002. After leaving office he returned to his former career in academia, as a professor of economics at the universities of Amsterdam and Oxford.

He sees little hope for his former colleagues in the PvdA, who he says need to face up to changing working patterns and untangle themselves from the trade unions’ agenda of prioritising full-time jobs over flexible contracts. ‘Zzp’ers [self-employed freelancers] are getting a very bad deal. Politicians want to have more people on fixed jobs, but of course that’s not possible, so really we should be trying to organise better ways for zzp’ers to work.

‘But the Labour Party follow the trade unions, and they see zzp’ers as evil. The only hope for the PvdA is that Lodewijk Asscher is a good debater, so he may get five or seats back on his own personal ticket, but it won’t be a major party.’

As for Mark Rutte, Van der Ploeg says the prime minister appears to have pinning his hopes on a ‘stop Wilders’ strategy. ‘He’s effectively saying, don’t vote for the Labour party or D66, even if you don’t like me, because the alternative is much worse. I know people who are saying, I’m not going to vote as I normally do, I’m going to vote for Rutte because it’s the best way to keep this guy out. That’s the main strategy of the VVD.’

Van der Ploeg says the other parties should avoid the temptation to erect a ‘cordon sanitaire’ around Wilders if he holds his narrow lead in the opinion polls. ‘I think it would be very unwise.

People will see Rutte as an illegitimate prime minister. The best thing would be for Rutte and Wilders to go into government together and see if it deflates him or not. If Wilders is the biggest and doesn’t get to be prime minister he’ll come back even bigger next time round. It’s like a boil that has to be lanced.’