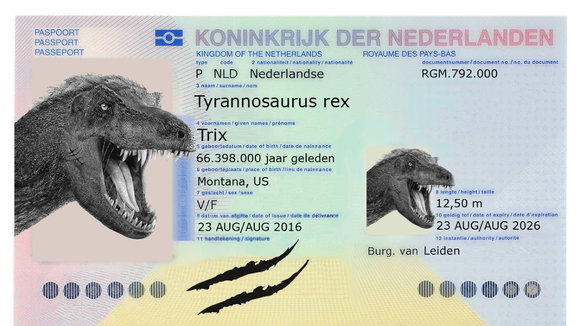 What’s over 66 million years old and roughly the length of a city bus? Why, it’s Trix the Tyrannosaurus Rex, one of the most recent expats to arrive on the shores of the Netherlands. Trix goes on show at the Naturalis natural history museum in Leiden on September 10 and Brandon Hartley has the low down.

When a team of paleontologists and other scientists from Naturalis embarked on a journey to the United States in the summer of 2013, they weren’t sure what they would find. By the following September they had unearthed a remarkably well-preserved Tyrannosaurus Rex skeleton during an excavation in the state of Montana. During its lifetime, the dinosaur would have stood 4 – 5 metres tall and weighed 5,000 kilogrammes. According to their analysis, the dinosaur was likely a female and would have died at about the age of 30 around 66 – 67 million years ago.

Finding a nearly complete T Rex skeleton like this one is the paleontology equivalent of coming across a long lost Rembrandt or a Van Gogh painting. It’s hard to exagerate the importance of the discovery. The team from Leiden were able to extract 80% of the skeleton during the excavation. ‘[It’s] one of the best three that have been found,’ Pete Larson, president of South Dakota’s Black Hills Geological Research Institute, recently told The Chicago Tribune.

But the cost of purchasing and moving a T Rex skeleton that weighs roughly 13,000 pounds from the United States to the Netherlands doesn’t come cheap. Naturalis was able to initially work out a deal with the landowners to purchase the dino but a large chunk of the millions of euros that the centre invested in the project and its upcoming exhibition came from donations.

To help raise all that cash, the centre launched a cheeky fundraising campaign titled Tientje voor T Rex in late 2013. It included collection containers located in cafes and shops in addition to a television advert featuring a clumsy dinosaur going door-to-door in search of spare change.

The skeleton was eventually christened ‘Trix’ in honour of former queen Beatrix. The name was suggested so many times by donors and Naturalis visitors that it became ‘an obvious choice’ according to museum representatives.

On 23 August, 250 passengers on a KLM flight departing from Chicago’s O’Hare International Airport heard a surprising announcement while they were waiting to board. They were told that they’d be flying to Amsterdam with the 66+ million year old Trix. At an earlier press conference, a group of representatives from the Netherlands and the US unveiled a large Dutch passport for the dino.

Trix officially arrived in Leiden a few days later and was welcomed to town with a celebration featuring hundreds of local school children. A caravan that included a marching band, a T. Rex parade float, tv naturalist Freek Vonk, and paleontologist Anne Schulp led a lorry carrying the bones to a stage set up in the city’s historic Beestenmarkt.

But all’s not well in Dinoland. Reports have recently emerged of a battle between landowners in Montana over which one of them deserves the payment for Trix’s bones. The initial seller and a neighbour each say that they deserve the estimated €5m the museum paid for the dinosaur. This isn’t the first time that the discovery of a T. Rex skeleton has led to a legal standoff over ownership. The extraction of a similar dino named ‘Sue’ in 1992 resulted in a ruckus that later involved the FBI and members of the US National Guard. 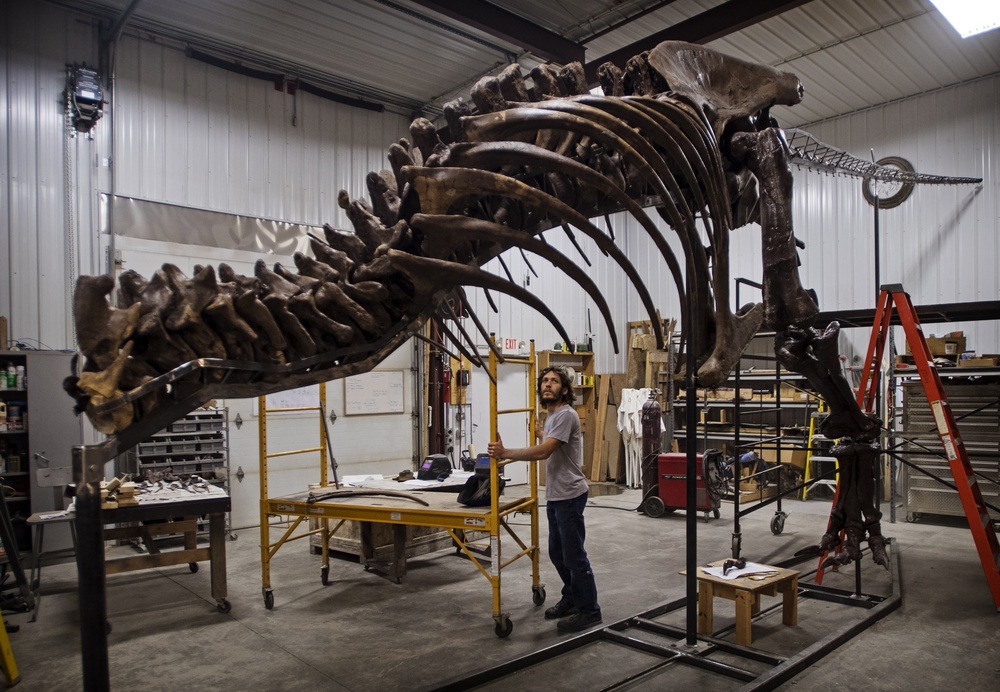 Now in place, Trix is the first and only T. Rex to be permanently displayed in mainland Europe. The exhibition will continue to June next year and will then go on an international tour. Trix will return to the Netherlands to take up permanent residence at a space in the newly renovated Naturalis in late 2018.

Trix is being presented in a unique, low to the ground pose that will make her seem more dangerous and intense than other T Rex skeletons in museums around the world. The decision was a practical one. Unlike similar displays, Trix will feature her actual skull instead of a replica, which will require a substantial amount of support that can’t be achieved with a more traditional pose. As Schulp told The Chicago Tribune, ‘You can really look the beast in the eye.’ Oh, and in case you were wondering, her missing bones will be replaced by 3D printed replications based on previously discovered T Rex skeletons.

For tickets and further information about the exhibition, head over to the museum’s website.