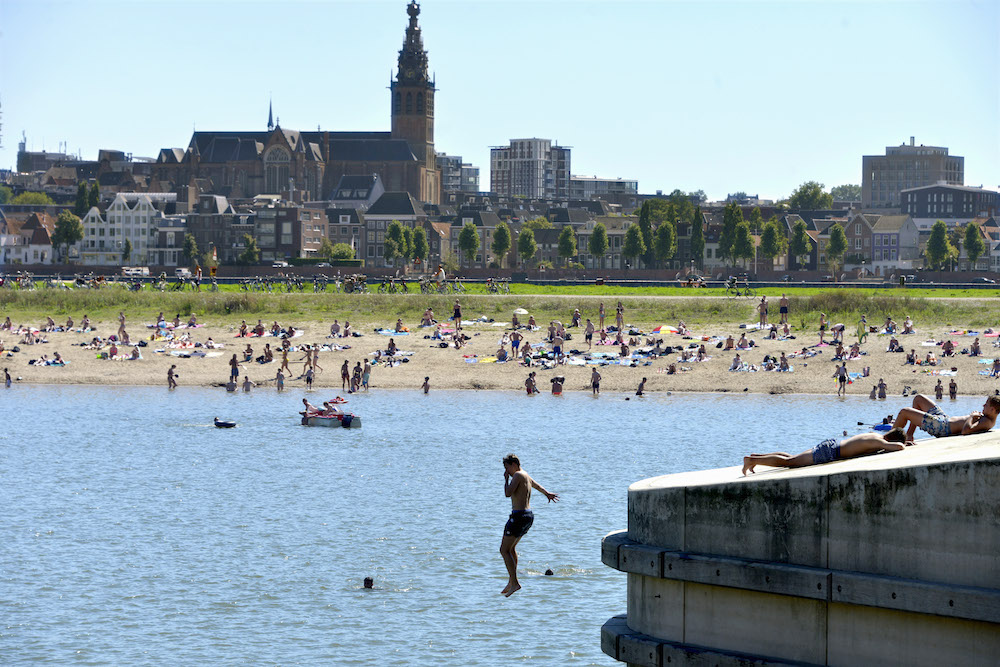 Swimming in the Maas river near Nijmegen. Photo: Flip Franssen via HH

Children are back at school and the workplaces are almost back to normal. But a bout of late summer sun means shrieks of delight can still be found in lakes and rivers from Friesland to Limburg. The Dutch do love their water, as Simon Weedy discovers.

The celebrations which followed Sharon van Rouwendaal and Ferry Weertman’s gold medals in the 10K open water swim at the Rio Olympics were a joy to behold. But to a nation which needs little excuse to jump into a lake or river, their achievements – as superb as they were – should have come as little surprise.

Weather-wise, you wouldn’t honestly say that it’s been the best summer ever. Frankly, it’s been a bit of a wash-out. Or at least it had been until a couple of weeks ago.

Right on cue, a decent spell of sunshine arrives and suddenly everyone is rushing to embrace this ‘Indian Summer’, topped off with a cooling dip. And despite an abundance of outdoor swimming pools, there is no shortage of places to indulge in ‘wild swimming’, be it at a local lake, river, canal or, of course, in the North Sea.

The facilities for swimming in lakes and rivers are often excellent, with many boasting a mixture of spotless toilet blocks, manned car parks and refreshment vans, to ensure the best possible experience.

Amsterdam, for example, has nine official places where you can swim, if you dare, and the water is currently around 22 degrees. In fact in the Netherlands as a whole, there are around 600 official places to swim. Noord-Holland tops the provincial league with 151 but even Utrecht has 25 places you can take a safe dip.

Every province publishes an annual list of approved swimming spots, and the transport ministry – which manages 6,000 kilometres of rivers and canals – teams up with local water suppliers and the environment ministry performs weekly checks on the water quality at each site during the official swim season, between May 1 and October 1.

The risks to public health are plentiful. Bacterial contaminants range from dogs playing in the water to discharge from sewer overflows and the presence of blue-green algae. But the biggest problem, according to the government, is actually a self-made one.

‘The greatest threat to swimmers in outdoor water is not in the quality of the bathing water, but by the people themselves’ says official guidance. ‘People are jumping from unsafe sites in rivers and canals, and swimming in unsafe locations in the sea… navigation, currents and objects in the water pose the greatest threat to the safety of swimmers.’

River swimming is a particular bugbear of many provinces, simply because of the sheer number of potential risks to life and limb from shipping lanes, cramp and hypothermia. Anyone found swimming in places where it is banned can face a fine of up to €140.

But none of this seems to dampen the spirits of a nation proud to show off its credentials as a land at one with nature in more ways than one. The Netherlands, don’t forget, has history with water.

About a quarter of the country remains below sea level, thereby explaining why flooding remains the country’s biggest natural threat. Little wonder then there is such a collective fascination with the wet stuff.

The crowds which lined the waterways of Dordrecht recently for the Swim to Fight Cancer event exemplified the nation’s passion for wild swimming. And if that were not enough, they were treated to a guest appearance by gold medallists van Rouwendaal and Weertman.

‘People here have always been keen swimmers but now the popularity of open water swimming is certainly increasing,’ says Ellen Julius of the Dutch swimming federation, which organised the event.

‘Swims like the one in Dordrecht are regularly happening across the country and attract lots of people. People love to take to the water in the Netherlands, but they are also well aware of the regulations around these activities,’ she adds.

And that really is the key. To all of you out there soaking up the last bits of summer, take the opportunities to swim outdoors but take heed of the warnings. Above all, enjoy.

* Visit www.zwemwater.nl for a clickable map of all the official swimming places