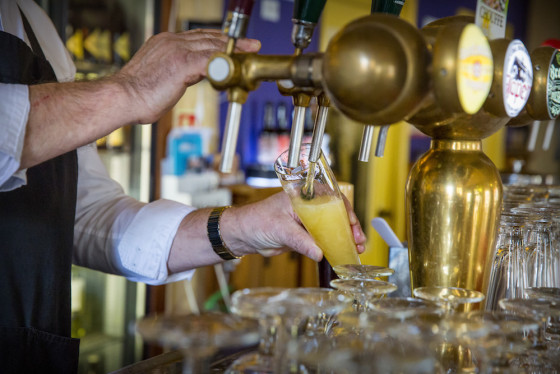 Beer brewing in the Netherlands dates back to the 9th century, though craft beer has recently experienced a considerable resurgence. Ever since Heineken won the gold medal for its pilsner at the World’s Fair in 1889, the Dutch have been known for that brewery and style, but there is much more to Dutch beer than that. Here are some facts.

Beer was not more common than water
It’s commonly said that beer was more popular than water in Medieval Europe and the reason often given is that the water was contaminated and beer, which had to be boiled during the brewing process, was cleaner. While this is a great story, it isn’t true. It is true that people living in Medieval Europe, including the Netherlands, did consume a considerable amount of beer. Beer was inexpensive (unlike wine, which was for the rich) and significantly lower in alcohol than what we consume today. It also had an advantage over water – it contained calories. For the average Medieval labourer, it was akin to cola.

The oldest brewery
Brand is the oldest continuously operating Dutch brewery. It has been in operation since 1340, though it wasn’t purchased by the Brand family until 1871, when the then owner, Jan Hendrik Hubert L’Ortye, sold it to Frederik Edmond Brand. The original brewery was part of the charter of Wijlre which gave the city aldermen the sole right to appoint a city brewer.

The big brewers
Brewers in the Netherlands produce 2,300 million litres of beer per year, mainly at the large macro breweries like Heineken, Amstel and Grolsch. Of this, nearly 50% is exported, a larger proportion than any other brewing nation. This makes the Netherlands the second biggest exporter of beer in the world, after Mexico. More than 37% of Dutch beer sent abroad went to the US.

Craft Brewers
Not all the beer produced or consumed in the country comes from one of the big breweries. Brouwerij ‘t IJ in Amsterdam is the oldest of the new wave of craft breweries and was started in 1985. There are now over 250 small breweries operating commercially within the country with names like Oersoep (primordial soup), Oedipus Brewings, Frontaal and Brouwerij de 7e Hemel.

Trappist and Bok
The Order of Cistercians of the Strict Observance are more commonly known as Trappists or Trappist monks, members of a religious order founded in France who produce goods to support the monastery, including cheese, wool and, of course, beer. Most of the trappist breweries are located in Belgium but two are in the Netherlands: Brouwerij de Koningshoeven, more commonly know as La Trappe and and Zundert, which was introduced in 2013.

The Dutch also have their own version of bok beer, which originally hailed from Germany. According to the official rules, bok must only be for sale between September 21 and December 21 each year. It is so popular in the Netherlands there are bok beer festivals in Amsterdam and Utrecht.

How much beer do the Dutch drink?
The Dutch drink, on average, 77 litres of beer per person per year, ranking them 14th in the world in terms of beer consumption. The largest portion of that (nearly 95%) is the pilsner style, popularised by Heineken and others.

Biertje?
If you walk into a bar in the Netherlands and order a biertje (little beer), you will be served a beer which will probably be the house beer (whichever major brewery they have a contract with.) That beer will probably be served in a .20l fluitje (little whistle) glass. Or it may be served in a vaasje (little vase) which can come in a variety of sizes, most commonly .33l. Unlike the English and the Americans, the Dutch don’t commonly serve pints. And unlike the Belgians, they don’t have a special glass for every beer.

Bruin Cafes
Your typical bruin cafe (brown cafe) is aptly named. The wooden floors, furniture and walls (either from wood panelling or years of smoking) will all be some shade of brown. This is your typical Dutch haunt and there are thousands all over the country. You can order a normal beer or perhaps some bitterballen. Don’t forget to pay your bill at the end of the evening; the bartender will normally keep track of your drinks on a scrap of paper behind the bar.

Beer proverbs
There are many sayings involving beer but most are never used and frankly we think that beer enthusiasts make them up as they go along. The best-known are ‘Wanneer het bier is in de man dan is de wijsheid in de kan‘ which roughly means that you mustn’t expect a person with a belly full of beer to explain the theory of relativity with any clarity. Another one is Bier na wijn geeft venijn, wijn na bier geeft plezier.  It means drinking beer after wine will give you a headache whereas drinking wine after beer will make you jolly and hangover-free. Cheers.