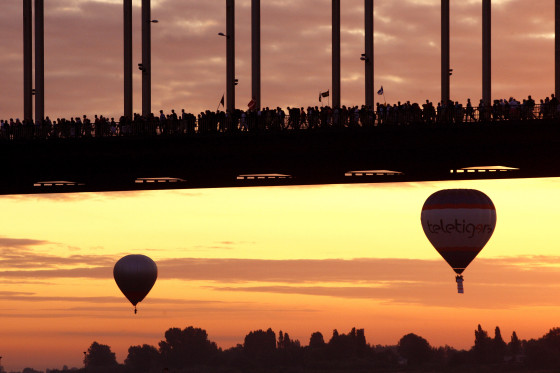 The Vierdaagse – or four day march – is a very Dutch institution in which some 50,000 people walk en masse up to 220 kilometres over four days for fun and glory. This year the Nijmegen Vierdaagse is celebrating its 100th edition. Here’s some key facts

1 The first Vierdaagse
The Vierdaagse first took place in 1909 when 306 (male and mostly military) participants started from 10 different army garrisons around the country to walk 35k a day for four days – four day events being very popular in the day. The idea was developed by the Dutch League for Physical Education because, according to some reports we’ve read, there were concerns that the arrival of motorised transport would hit military fitness.

2 The Nijmegen connection
In 1925 the big official Vierdaagse moved to Nijmegen where it has remained ever since. The marches have a different route each day through Gelderland, Brabant and Limburg as well as Nijmegen and its outskirts. There were no marches in 1914 and 1915 and during World War Two which is why Nijmegen is celebrating 100 marches this year.

3 The start
The Nijmegen Vierdaagse always starts on the third Tuesday of July at dawn.

4 Who is taking part?
This year, people from 68 different countries around the globe are among the 50,000 who will start out, including Afghanistan, Ireland, Sweden and Vietnam. There are soldiers from 27 different countries on official list. The youngest competitors (and there are four of them) are just 11, including Karl Gunnergren from Hono in Sweden. The oldest walkers are Herman Dubie of Amsterdam and Jan Zwijnen of Huizen who are both 93. The oldest international competitor is Svend Sorensen (89) from Rask Molle in Denmark. 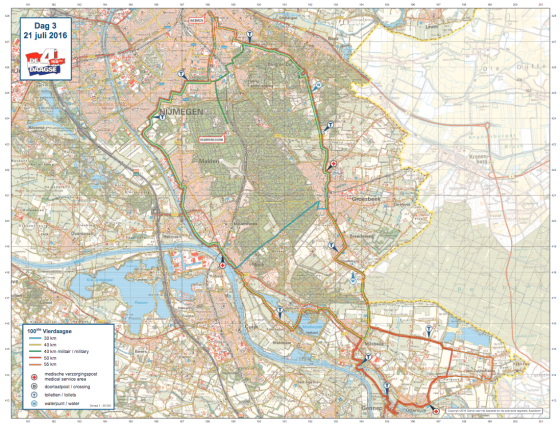 5 The rules
The Vierdaagse is the only walking event of its kind to have rules about distances based on sex and age. Youngsters between 12 and 15 and the over 60s can sign up for a  30 kilometre daily march or more if they’re up to it. The minimum distance for men and women over 15 is 40 kilometres a day but a group of men who were born between 1967 and 1997 start with a minimum of 50 kilometres. The equality commission has labelled the difference ‘discriminatory’ several times but to no avail. This year, the super fit of both sexes can also opt for a 55 kilometre a day walk.

6 The weather
The event takes place in summer, not the most reliable of seasons in the Netherlands, and the Vierdaagse organisers sensibly advises to come prepared for both rain and shine. In 2006 the Vierdaagse was cancelled when two people died of heat stroke on the first day of the event and no change in weather was expected. This year, the organisers are warning people to take care because high temperatures are expected all week, particularly on Wednesday.

7 Alternative events
Many people feel the Vierdaagse has become a victim of its own success and are voting, literally, with their feet. They prefer to take part in less crowded walking events such as the Apeldoornse Vierdaagse. For children who are not yet up to the 30k challenge there is always the Avondvierdaagse, an evening event with distances kinder to small feet and popular at primary schools. If you are a parent with children at a Dutch primary school you are likely to find yourself roped in. 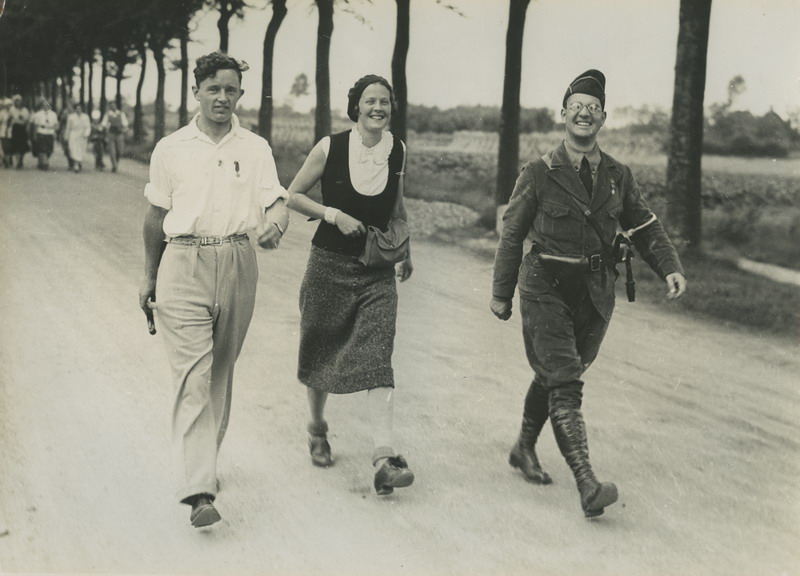 8 Gladiola
The finishing line of the Vierdaagse is in Nijmegen’s St Annastraat which is called the Via Gladiola for the occasion, in acknowledgment of the city’s Roman past and the arduous nature of the event. The expression ‘De dood of gladiolen’ (death or gladioli) is supposed to hark back to Roman times too, a gladiolus being a Roman sword.  Participants are given great bunches of gladioli (the flower not sword) when they cross the finish. To mark the 100th event, gladiolus flower grower Theo Theunissen and plant breeder Hermien Challa have developed a ‘new’ flower called ‘The walk of the world’ which is shorter and lighter than its predecessor, and is therefore, apparently, easier for walkers to carry.

9 The rewards
Those who manage to drag themselves over the finishing line, blisters and all, receive the so-called ‘kruisje’, or cross. It’s official title is ‘Cross for manifest marching ability’. 84-year-old Bert van der Lans is the official Vierdaagse record holder and is going to walk his 69th Vierdaagse this year.

9 This year’s celebrations
In order to celebrate the hundredth edition of the Vierdaagse a number of special events have been planned, such as the launch of a Vierdaagse wine (not to be imbibed on the way) and a one-off new model of Hi-Tec trainers. There will also be an exhibition about the Vierdaagse at Museum Het Valkhof  (until September 4).
If you don’t want to walk you can always go to the Vierdaagse festival (16- 22 July) with music and lots events for children.