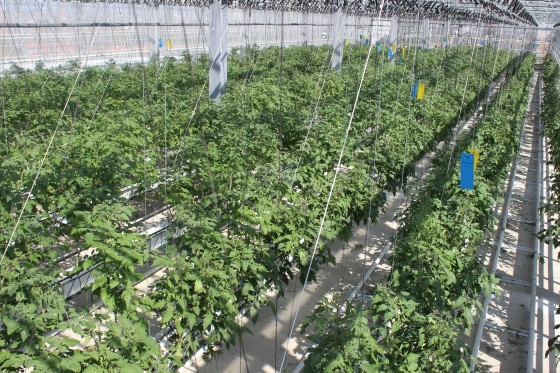 An empty Philips office block in the heart of The Hague is producing vegetables and fish on a commercial basis. Senay Boztas explores Europe’s largest commercial urban farm.

This dilapidated, 1950s office block in the middle of The Hague, is growing something astonishing: on its sixth floor is a 370 sqm fish farm, while the roof has been converted to a 1,200 sqm greenhouse for vegetables, making this Europe’s largest commercial urban farm.

The project will be formally launched on May 20 and a team of young enthusiasts from the private business UrbanFarmers BV is busy with the fitting-out of a large events area and roastingly-hot visitor greenhouse.

Martinez is director of operations at the unromantically-named ‘UF002 De Schilde’. This is the Swiss-owned business’s second farm; its first (UF001 LokDepot, in Basel) is described by managing director of UrbanFarmers Benelux Mark Durno as a ‘break-even facility’.

But it has high hopes that this €2.5m construction will show the way to a future of urban farming, reusing vacant office buildings that are simply too expensive to pull down, or supplying shopping centre restaurants with their own rooftop greenhouses.

The idea began in 2011 as a technology spin-off from the University of Applied Sciences (ZHAW) in Zurich. With the help of private investment and a European loan via Stimuleringsfonds Volkshuisvesting (SVn), the Dutch municipal housing development fund, UrbanFarmers BV is turning the top of a former Philips telecommunications building into a farm for the modern age.

Come September they expect to be selling 500 fresh-water tilapia fish a week and 50 tonnes of rooftop veg a year. Then they have set their sights on other floors, and other places in Rotterdam and Amsterdam.

‘I grew up on a farm in Aberdeenshire,’ says Durno. ‘One of my jobs as a six-year-old was to pick up the milk for the morning breakfast from the dairy. The only thing I got excited about was that the cream separated. We have this disconnect with what fresh is, instead of enjoying the fact that we have a good quality, fresh product in our mouths without questioning it.’

So, he wants to connect people up again. In the first instance, the farm has ‘gastropartners’ in restaurants and a cooking school that will use its food. From September, they will also offer local people in the Hague a weekly basket of fish and veg costing about €12.50 per person for around 200g of fish, plus 700g of tomatoes, cucumbers, aubergines, Swiss chard, baby leaf salad and those trendy ‘microgreens’.

‘I will be very happy to reach 900 customers a week,’ Durno adds. ‘In the next five or even 15 years, this will be a niche of the niche. But it links into the circular economy: we have empty rooftops and empty industrial buildings. In The Hague, 25% of buildings are empty. Let’s fill them with produce.

‘I think there is also a future for urban farming in the Middle East and Singapore. Qatar, for instance, imports 90% of its food. Although our challenge here is heat, light and wind, there it is cooling. The next challenge is to get people to come here and be part of this revolution – the fresh revolution.’

So what does the ‘fresh revolution’ look like? There’s a massive, fishy-smelling room full of 28 tanks and shimmery tilapia that swim up to visitors in the hope of food. Tiny fish farmed in Eindhoven come in on one side, given sustenance by an automated feeding system. On the other side are tanks for the bigger fish, which will be killed by electrical stunning.

Then, at the head of the room is the bio-filter, a tank full of thousands of little plastic spools to maximise surface area. Marketing assistant Shuang Liu describes it as the heart of the system, although it is more accurately the gut: a massive vat of water, where bacteria convert waste ammonia (fish faeces) into nitrates that are used to fertilise the plants. Meanwhile, the plants – which are grown without soil – purify the fish water. The system is known as aquaponics. ‘This is nothing new,’ Liu explains. ‘It was used in ancient times in Asia and Africa, but we bring modern technology and controls to balance it better.’ 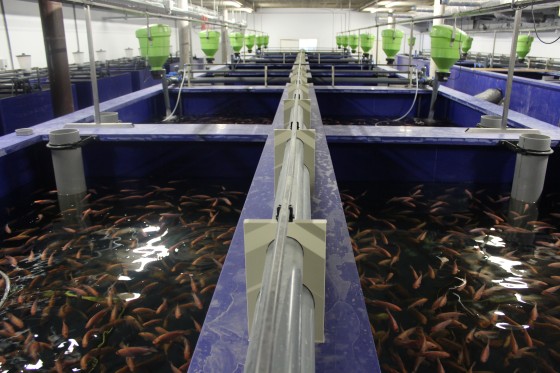 She admits that one challenge could be to get people buying tilapia, which is a popular fish worldwide but has been plagued by recent stories of poor farming techniques, high use of antibiotics and high levels of omega-6 fatty acids, which a report has suggested may promote inflammation, aggravating some diseases.

‘Tilapia don’t have a good reputation in the Netherlands,’ she says. ‘They used to be grown badly in Asia but in our production, we work to higher standards. We don’t use antibiotics for the fish or pesticides for the plants. If they become diseased, we take them out of the system. However, we can’t be certified organic as they don’t certify hydroponics and water-based plant systems. But we really have more control of all of the elements, and our operation is checked every day.’

Sure enough, in the next room along is the ‘brain’, a computer that monitors water, oxygen levels and temperatures. There’s a large space for packaging, plus a couple of offices. Then, upstairs, is the massive greenhouse, filled with leafy greens and unrecognisably hot Dutch air.

Durno has to admit that he can’t see his old fellow farmers from Scotland moving onto the rooftops of defunct shopping centres. ‘It’s a little bit different,’ he says. ‘Traditional farmers look at us as a community which is a design or hipster-driven trend.’

But change is happening. ‘Five years ago, contemporaries in Scotland were laughing or thought I had had a breakdown. Now [some of them] want to listen and learn about it, [where it could help] with their business.’

Chef and co-owner of Mochi restaurant in The Hague, Patrick Buyze isn’t laughing: he was quick to sign up to be a gastropartner. ‘It was a bit of a fantasy to grow in the city on a skyscraper,’ he says. ‘So much of our deliveries have been shipped for thousands of miles. This farm is completely engineered: it isn’t biodynamic or full-moon harvested, but the taste is fantastic and they are willing to cooperate and try growing what you like.

‘This is part of the future: there’s going to be a lot of change in the food landscape. I don’t think the way we are doing it now is sustainable for the long-term future, and also people want to know where their food comes from.’

SVn manages The Hague’s Fund for Location and Economy (FRED), channelling European cash to loan money to commercial projects that help improve the city. Nico van Est, fund manager, thinks it’s a project with potential: ‘UrbanFarmers have their own view on how we should deal with our food. They bring food production close to the city dweller, in a sustainable and innovative way that really appealed to us. There are concrete plans to roll out vertical urban farming onto the other floors. De Schilde’s building has become central to innovation in the field of fresh agricultural and horticultural products near the city and consumers.’

And what about that cucumber? Liu took it home, cut it into sticks, and ate it with spicy sauce. She emailed her verdict: ‘Thin skin, crunchy texture, and a surprising sweetness from the flesh, not to mention the freshness and excitement of eating the first harvest! :-)’