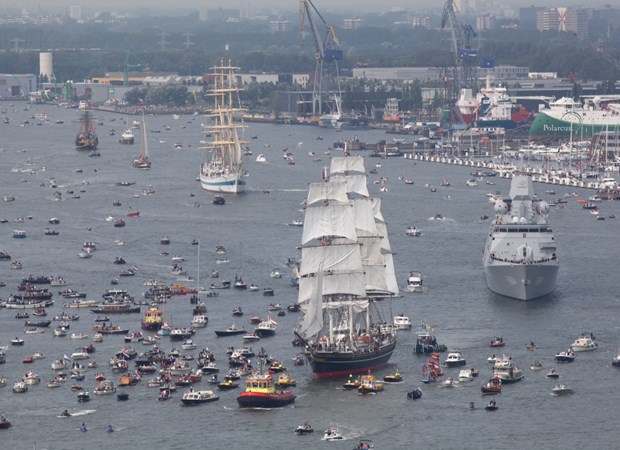 While researching a book on ‘Why the Dutch are Different’, Ben Coates realised that an amazingly large number of the things which an outsider might think of as ‘typically Dutch’ could be explained at least in part by a single factor: water.

First, of course, there is the Dutch landscape itself. The Netherlands famously is not just fronted by water but permeated by it – a fifth of the total surface area consists of water. That figure would be even higher were it not for the intricate lacework of dikes and canals, and thousands of water-pumping windmills, which liberated land from the waves. As a result, Dutch topography is among the most unique in the world: acres of flat grassland, turning windmills, hunchbacked dikes, and barely a hill in sight.

The fact that reclaimed land is both flat and fertile has also influenced many other things which help keep the Dutch tourism industry afloat. Tulips thrive in the silty reclaimed soil, while thick wooden clogs keep farmers’ feet dry when trudging through boggy fields.

Tall buildings divided into tiny apartments help recoup the cost of building deep foundations. Red-brick roads prevent tarmac cracking on soggy subsiding ground. And then, of course, there are the bicycles: the perfect way of getting around a place where the steepest hill is usually a tiny bridge. Were it not for the water, the icons printed on Dutch postcards would look very different indeed.

Less obviously, omnipresent water also influenced Dutch diets. As land was reclaimed from the sea, Dutch farmers quickly realised that the silty soil left behind was perfect for growing rich grass; and that this grass in turn made perfect food for cows. Milk produced by the cows became a popular drink when clean water was in short supply.

Whatever wasn’t drunk was churned into another product which soon became a national obsession: cheese. Today, the average Dutch person eats nearly a third more dairy produce than the average Brit, and high dairy consumption is one reason why the Dutch are the tallest people in the world.

Without all the water, and the resulting deluge of dairies, the Netherlands might well be filled with short people eating croissants for breakfast.

Water also changed the course of history by lubricating the so-called Golden Age; the extraordinary era when the seventeenth-century Dutch led the world in commerce, art, architecture and science.

With a long coastline lying at the nautical crossroads of Europe, the Netherlands was perfectly placed to become one of the continent’s greatest trading nations. Even far inland, a dense network of canals and waterways enabled German merchants to travel all the way to Amsterdam, Antwerp or Bruges without ever breaching the stormy North Sea.

As a result, the country not only developed Europe’s largest port, but controlled an empire stretching from the Caribbean to Africa and Indonesia. Today, the legacy of the Golden Age is clear: without seagoing trade, cities like Amsterdam couldn’t have afforded their tall town houses and beautiful churches, and Rembrandt and Vermeer might be long-forgotten cobblers or blacksmiths.

Were it not for the water, this tiny nation would never have become the tenth richest in the world.

In the political sphere, too, the watery landscape had a profound impact on the Dutch. Historically, the fact that one person’s land was liable to flood if another person failed to maintain their dikes meant that decisions had to be made jointly wherever possible.

People therefore became used to negotiating to get their way. National governments were usually coalitions, and most political decisions based on compromise. The fact that even small minorities had an equal voice was one reason why the Netherlands developed famously liberal laws concerning things like drug use and prostitution, and why minority groups were awarded equal rights.

To outsiders used to seeing politics as a blood sport, Dutch politics can seem either very sensible or very boring. And the damp terrain is at least partly to blame.

Finally, the Dutch themselves have also been shaped by their landscape. All that empty sky and flat reclaimed land seems to have flooded their souls, making most Dutch as open and accessible as the landscape they live in.

Travelling around the Netherlands, I was routinely amazed by how direct the Dutch were, and how little value they attached to quaint notions like privacy or solitude. Try as I might, I never found a shy or introspective Dutchman, and the waterlogged terrain was again partly responsible.

As the great novelist Cees Nooteboom once wrote: ‘Holland doesn’t have mountains. Everything’s out in the open. No mountains, no caves. Nothing to hide. No dark places in the soul.’

There is, of course, far more to the Netherlands than just clichés like clogs and windmills. In the strange alchemy of national culture, many other influences have played a role – from the war against the Spanish to the religious divide between north and south, from the invasion by the Nazis to the influx of immigration.

However, the deeper one digs, the more likely one is to strike liquid. In the Netherlands, water really is everywhere.

‘Why the Dutch are Different: A Journey into the Hidden Heart of the Netherlands’ by Ben Coates is published by Nicholas Brealey Publishing.


Ben Coates will soon be appearing in a series of events in Rotterdam, The Hague, Amsterdam and London. For more information, see his website