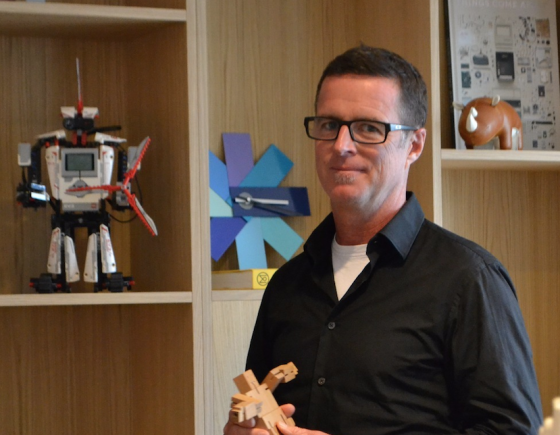 For Canadian Maurice McGinley moving back to the Netherlands after an eight year break in sunnier climes has given him an appreciation of the new season’s herring and having good neighbours.

How did you end up in the Netherlands?
Although my wife, Ana, is from Australia, she had a close relationship with her father’s family in the Netherlands. So when we decided it was time for a change of scenery in 1999, we headed here.  We lived in Eindhoven until Ana became pregnant with our third child. We decided life would be easier in Australia – and the Dutch weather was getting us down. Life is good in Oz, but in the end, we found Australia too far away from everything else. After eight years in Australia and Asia, we were happy to have the chance to come back to the Netherlands.

How do you describe yourself – an expat, lovepat, immigrant, international, etc – and why?
I’ve been away from Canada too long to feel truly at home there, so ‘expat’ doesn’t apply. ‘International’ describes me better, but it sounds a bit pretentious.

We’ve changed countries as often as we have (6 times) because the experience of learning to live in a new culture – as gruelling as it can be — is very rewarding. It helps you appreciate simple things that are easy to overlook when you are very settled – like sunshine.

How long do you plan to stay and why?
Indefinitely. We’ve been here four years now and have no plans to leave, especially not before the kids’ braces come off.

Do you speak Dutch and how did you learn?
I speak English at work and at home. I study Dutch about three hours a week, and try to watch a Dutch tv show or movie every week, but I’m far from fluent. I can handle most daily transactions, yet when a conversation gets interesting, I have to switch to English.

I’m proud that my children are fluent in Dutch, even if they do refuse to speak it to me.

What’s your favorite Dutch food and why?
I like nieuwe haring with onion for the taste, the texture and the freshness. Plus, it’s local.

What do you miss about back home?
Good beef.

How Dutch have you become?
Sometimes the Dutch take moderation to extremes – the food’s consistently bland, for example. Apart from that, and the language, I’m completely at home.

What’s your top tourist tip?
Carry 50 cents in change with you at all times.

Tell us something surprising you’ve found out about the Netherlands.
The Dutch bike path network is the result of top-down civic planning decisions made in the 1970s. The cycle paths preceded the cycling culture.