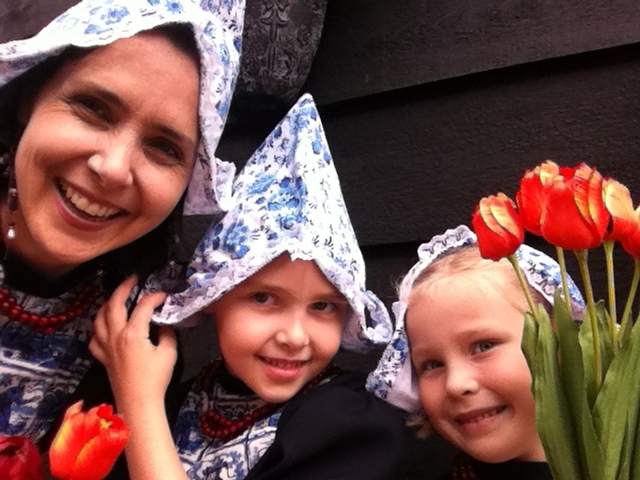 Australian Renée Veldman-Tentori, 39, has been in the Netherlands for seven years off and on. She runs her own company and misses her parents, sunshine and Bouwen mangoes.

How did you end up in the Netherlands?
I fell in love with a Dutchman. We met when he was backpacking in Australia in 2001, just before I left for a four-year working holiday in the UK. After a year there, I ended up in the Netherlands instead.  After the birth of our first daughter in 2007, I managed to drag him to Australia for a few years. Our second daughter was born in Brisbane in 2009, and then two years later, when he was homesick and wanted to further his career, we ended up back here.

How do you describe yourself – an expat, lovepat, immigrant, international, etc?
An international Dutch Australian!

How long do you plan to stay?
My husband feels he has a lot more opportunities to further his career here. We’ve now bought a house and the girls are settled at a (Dutch) school so I think we’ll be here for a while.

Do you speak Dutch and how did you learn?
Ja hoor. When I first moved here, as a non-EU citizen I was forced into the integration and Dutch language course for a year from 2003.  Though I hated it at the time, I can now see the benefits as I’m fairly fluent. I started with the Delftse Methode at the TU Delft then moved on to Mondriaan. After I passed the exams in 2004, I haven’t done any more formal study and as I now work in English, have become a little lazy with Dutch. I am considering going back to a formal class to ‘brush up’, though my two children attend a local Dutch school and seem to enjoy correcting me when necessary.

What’s your favourite Dutch food?
Well I quite like olieballen but am allergic to peanuts and many of the olliebal kraams bake them in peanut oil! Good for my health to have to avoid these I guess.

What do you miss about back home?
Naturally my family and friends. I Skype my parents almost daily as I miss them so much and also so they can continue to have a relationship with their only grandchildren. Being from Queensland, Australia, other things I miss are sunshine, warmth and ginger beer. Oh and delicious, sweet, juicy Bowen mangoes! The mangoes are just not the same here.

How Dutch have you become?
Interesting question, as I’ve noticed I sometimes find myself fighting losing part of my Australian character. One thing I’ve become much better at is being much more direct and honest. In Australia, this would often be perceived as rude, but here I fit right in.

What’s your top tourist tip?
I’m so fortunate to live right between Delft and The Hague, both are really beautiful cities to spend time just wandering around in.  I love taking my children to museums and blog about it at www.cultureandkids.com

Tell us something surprising you’ve found out about the Netherlands.
That the temperatures I previously would consider as ‘winter’ last for around nine months of the year here.

If you had just 24 hours left in the Netherlands, what would you do?
We’ve faced this before when we thought we were leaving the Netherlands ‘for good’ to move to Australia – and spent it mostly drinking coffee and eating appeltaart with my husband’s family.