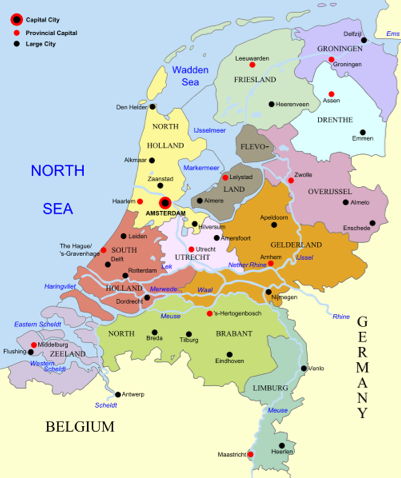 The Dutch go to the polls next week to elect the members of the 12 provincial councils. In case your local geography is not up to scratch, here’s a list of all 12.

Drenthe, capital Assen
Drenthe is a mainly rural province, with some industry around Assen and Emmen. It is also home to 53 of the Netherlands 54 hunebedden, or dolmens – megalithic tombs.

Flevoland, capital Lelystad
The newest province, created largely on post WWII land reclaimed from the sea. It’s flat and full of farms. Flevoland has the highest unemployment rate in the country.

Friesland, capital Leeuwarden
Fryslân, to give the province its name in the local language, is the biggest Dutch province if you include water as well as land. Frisians who move away – and there is no university in Friesland – are ferociously proud of their roots.

Gelderland, capital Arnhem
Gelderland may be one province but its folk divide it into three areas: the Betuwe, known for growing fruit; the Veluwe with its national park; and the Achterhoek – literally back corner – which stretches to Germany. As far as Amsterdammers are concerned, people from the Achterhoek are stereotypical country bumpkins.

Groningen, capital Groningen
Groningen is largely rural – with huge empty expanses of black earth – but has large natural gas reserves in Slochteren. Extracting this gas is causing parts of the province to sink. Beerta is the only Dutch local authority area to have had a communist mayor.

Limburg, capital Maastricht
Limburg is pretty well surrounded by Germany and Belgium and is home to the Netherlands’ highest hill, the Vaalserburg, which is 322.7 metres high. The capital Maastricht is notorious for giving its name to the Maastricht treaty. Geert Wilders comes from Venlo in Limburg.

Noord-Brabant, capital Den Bosch
Nearly all of Noord-Brabant is above sea level, which will probably be handy in years to come. As a province, it is big on farming, especially mega pig farms. Nor should we forget Eindhoven, home to Philips, and Kaatsheuvel, home to the Efteling ,the biggest theme park in the Benelux.

Noord-Holland, capital Haarlem
Amsterdam is the national capital, so Haarlem gets the province, although it stretches right up to Den Helder and has sneaked hold of one Wadden island – Texel.

Overijssel, capital Zwolle
The one province everyone forgets, Overijssel means lands across the river Ijssel, and it stretches from the German border to the former island (and fundamentalist Christian hotbed) of Urk.

Utrecht, capital Utrecht
The smallest and most central of the provinces, Utrecht is also home to the Utrechtse Heuvelrug, or hill ridge, former healthland now largely covered with pine plantations.

Zeeland, capital Middelburg
The most western province, made up of a string of islands and largely below sea level, Zeeland has the lowest jobless rate in the country. It is a hugely popular destination for tourists, particularly from Germany.

Zuid-Holland, capital The Hague
Zuid-Holland is one of the most densely populated and industrialised areas in the world, thanks to the industrial sprawl of Rotterdam and its port. The southern part of the province is made up of a number of islands, including the strangely named Goeree-Overflakkee.