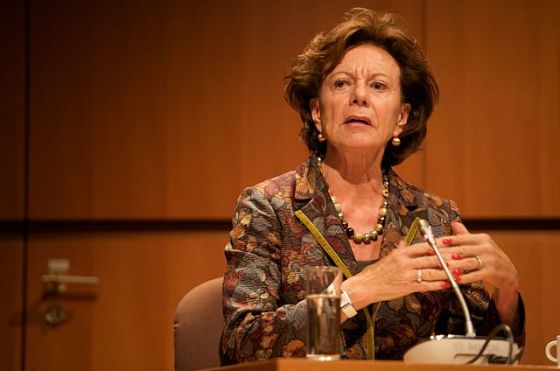 The indefatigable Neelie Kroes is off in search of innovative companies. She’s the special envoy who will lure European start-ups to the ‘StartupDelta’.

The battle for the new techno giants is a global one. A recent article in Forbes identified the Netherlands as one of seven ‘start-up hot spots’ in Europe. According to the magazine our country is at the ‘forefront of the continental digital start-up scene’.

Why? Well, there’s the quick internet connections, a well-educated workforce with a good knowledge of English – even if we say so ourselves – a special innovation box courtesy of the tax office, or failing that, a nice deal on profits tax. Housing isn’t expensive, you can cycle to work and come ten o’clock the whole country turns into one big reverberating dance event hosted by the world’s best DJs. With the exception of the Rijksmuseum of course, where the very best Rembrandts can be savoured in silence.

It’s not a bad pitch by any means. But, as Kroes knows better than anyone, growing businesses need money. They need investors who will turn a start-up into a viable venture. Last week Kroes explained where she was going to find it: ‘Pension funds should invest in venture capital funds.’

Cue a déjà vu moment. Suddenly I was back in September 2013, when minister Henk Kamp initiated Dutch Investment Institute NII. It was going to channel Dutch pension money towards businesses.

That same month Jan Hommen presented the Stimulation Fund Orange Capital, which was going to invest (institutional) investors’ money in Dutch business. Then, at the beginning of 2014, there was the NL Entrepreneurial Fund, an initiative supported by Robeco, Euronext and a number of banks, which was going to transfer pension money into loans to small and medium-sized companies.

A year later we find that pension funds are not exactly easily led. To their credit the new investment funds are still going and have been able to get their hands on some money – which is the good news – but not because the pension funds have embraced their new role as bankers to the small and medium-sized companies of this country. The fact is that nothing much has been happening there at all.

And this means the Netherlands will remain the only country in the world which is rich and poor at the same time. It’s rich because of a veritable mountain of savings and it’s poor because none of the businesses is able to get its hands on the money.

Instead it goes towards government bonds with a negative return on investment, shares in big foreign companies or – via foreign investors – start-ups in China or Silicon Valley. It’s going everywhere except our very own small and medium-sized companies.

Dear Ms Kroes, a visit to the pension funds is way overdue. Go round, bang your fist on the table and tell them to bloody well use our money to prop up the national economy.

Mathijs Bouman is an economist