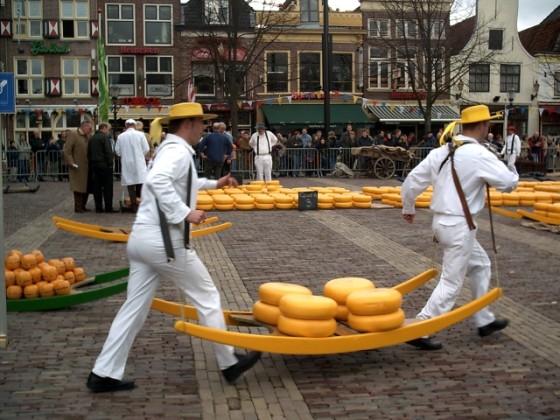 There is more to Dutch cheese than the plastic versions of Gouda and Edam you tend to find in foreign or even some Dutch supermarkets. Here are some of our favourites, and hard cheese if we’ve missed yours out.

1. Leidse kaas Cheese with cumin seeds to give it flavour.

2. Friese nagelkaas Cheese with cloves and cumin seeds, an acquired taste for some and a tried-it-once-never-again experience for others

4. Goudse kaas, old. Crumbly, salty, pungent with overtones of sick (don’t let this put you off, just hold your nose and eat this delicious cheese on a piece of roggebrood or rye bread.)

6. Geska Glarus Not a Dutch cheese but such a pervasive presence on Dutch tables since times immemorial that it deserves a place. It’s stinky, powdered Swiss cheese which tastes like shredded cardboard. Expats who miss it can buy it in the home sickness shops on line.

7. Rommedoe (roum is the Limburg dialect word for cream and doe is derived from the French doux, or soft) A hold-your-nose Limburg cheese which is no longer made in Limburg because of Dutch regulations but pop over the border with Belgium and you’ll find it under the name Hervekaas. It’s production goes back to the fifteenth century. Sharp, pungent and stinky. Don’t take on any form of public transport.

8. Edammer kaas. Small round cheese whose production goes back to the 17th century and one of the best-known Dutch cheeses in the world. It was known as a klootkaasjes or ball (as in gonads) cheese.

9. Texelse schapenkaas. This cheese was made in the 16th and 17th centuries on the island of Texel. One of the more surprising ingredients was the juice of boiled sheep’s poo which gave it is characteristic colour (green) and taste (sharp). It also helped keep the cheese. This practice was discontinued in the 1930s but you can still buy the poo-less variety.

10. Limburger. Beloved of comedians for its pungent smell – often compared to body odour – Limburger cheese was made in the 19th century in the Duchy of Limburg, which is now divided between the Netherlands, Germany and Belgium. Nowadays its mainly made in Germany. They are welcome to it.