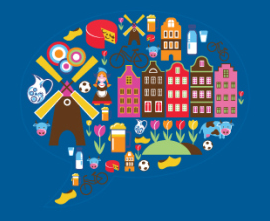 In the 17th century, when the English and the Dutch were trying to lord it over the rest of the world, the English tried to smear the competition by prefixing anything cowardly, fake or otherwise worthy of disdain with ‘Dutch’.

Some of these expressions are still around and have taken on additional meanings. Here are 10 of them.

Double Dutch is not only gobbledegook, or gibberish, it is also a rope skipping game played by two people turning two long ropes in the opposite direction while a third person jumps up and down in the middle trying not to get hopelessly entangled. This versatile little idiom also means using both a condom and the pill at the same time. Context is all, obviously.

A Dutch uncle is someone most people would want to avoid. Someone who talks to you like a Dutch uncle is usually berating or admonishing you. Unless of course you have an uncle who is actually from the Netherlands in which case he might be very nice and never tell you off.

A Dutch wife is a rattan bolster used in the tropics, a hot water bottle and, oddly, associated with the Japanese name for a plastic sex doll, apparently of the cheaper kind thus confirming the Dutch reputation for stinginess.

Going Dutch is the perfectly sensible practice of going out for a meal on the understanding that each of the participants pays for his or her own share instead of divvying up the bill between you which invariably favours the heavy drinkers and leaves the frugal I-only-want-a-starter types out of pocket.

A Dutch treat on the other hand is a completely different kettle of fish. If you are invited to go out for a meal thinking you will be treated only to find out that you are expected to cough up half the money then you have been taken for a ride, or Dutch treat. If this happens to you don’t hesitate to be a Dutch uncle and berate the person severely before stalking off.

Dutch courage is usually displayed after imbibing a lot of alcohol. Thus: a semblance of courage.

A Dutch roll is not a cheese sandwich but the left to right tipping movement made by an aircraft. It is said to derive from the rolling motion of a particular design of Dutch ship. It could also come from the movement made while speed skating, a sport the Dutch are particularly proficient in.

Taking Dutch leave means defecting. The Dutch are not alone in absconding: there is also such a thing as taking French leave which means doing a moonlight flit.

A Dutch oven is a cooking pot in America but it is also used to describe the horrible practice of trapping a bed-fellow under the blankets after releasing a particularly nasty fart. Perhaps you didn’t want to know that but there we are.

A Dutch agreement is an agreement made between two people who are drunk (‘I will go halves with you if I win the lottery’) and which neither of them remembers afterwards, which is fortunate if the lottery is indeed won by either party.