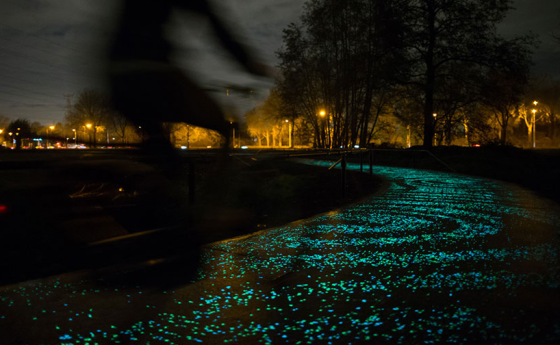 Starry Night near Eindhoven is both a functional cycle path and a work of art by Dutch artist Daan Roosegaarde. It’s inspired by a painting by Vincent van Gogh. The opening of the cycle path marks the start of the celebrations for the 125th anniversary of Van Gogh’s death in 2015.

The glow-in-the-dark cycle path uses light-emitting techniques: light stones are charged during the day and emit light during the evening. This not only lights up the cycle path, but also creates the impression of cycling through Van Gogh’s eponymous painting..

The Starry Night cycle path received a lot of attention from media all over the world. Most people love the project: ‘Beautiful. Technology making the present both futuristic and magical. Should embrace more of this to make life just a little bit more special,’ writers said. However, one sceptic is a bit confused by the concept: ‘I just don’t see the reasonable application.’

Obviously the Starry Night cycle path is meant as a bit of fun, but it’s also intended as a way to generate publicity for a serious, energy saving application, the Smart Highway: interactive road markings powered by solar energy that light the roads (no more street lights!) and increase road safety.

SolaRoad in the village of Krommenie is a pilot project testing the practicality and cost efficiency of embedding solar panels into a cycle path. The path is to generate energy that can power anything from street lights or traffic lights to electric cars or houses.

The experimental cycle path is made up of rows of solar cells, encased in concrete blocks. The road surface consists of a one centimetre thick translucent layer of tempered glass which is said to meet all (safety) requirements. A non-adhesive finish and a slight tilt so the rain can wash off dirt keep the solar panels clean so they can work as efficiently as possible. The path is now 70 metres in length, but will be extended to 100 metres in 2016. 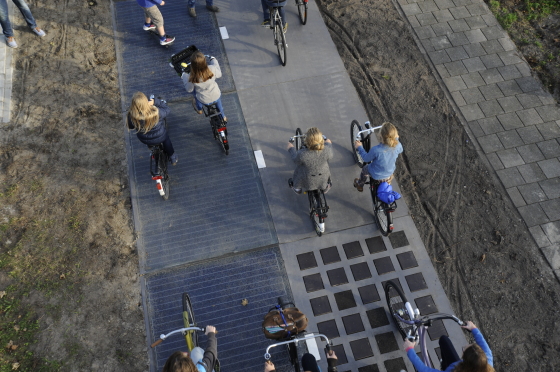 The developer of the solar bike path concept, the Netherlands Organisation for Applied Scientific Research TNO, sees great potential in the idea. They say there are only enough roofs suitable for solar panels to meet 25% of the demand for electricity in Holland. With SolaRoad, up to 20% of the 140,000 km of road in Holland could potentially be used to harvest solar energy. ‘It could mean a breakthrough in the production of sustainable energy.’

The cycle path in Krommenie is expected to generate between 50 and 70 kWh per m2 per year. This would be enough to power three households. The cycle path, which cost an impressive €3m, has been financed by the local government and Dutch companies who believe the project has economical potential.

The idea of using existing road infrastructure to generate solar energy is not new. Holland already has solar panels on street lights, sound barriers and sides of bridges. In a small and densely populated country efficient use of space is simply a must. The idea is now also catching on across the globe.

The Dutch media and public, who are usually very quick to voice any criticism, are overall optimistic. They hope ‘cycling is to become even more sustainable’ and are waiting for the test results to see whether the concept works.

Outside Holland, the response has been sceptical if not outraged. British newspaper The Guardian wrote a positive piece about the experimental cycle path, but pointed out that ‘since the path cannot be adjusted to the position of the sun, the panels produce roughly 30% less energy than those fixed on the roofs.’ This triggered a heated debate as to whether roads are the best location for solar panels.

The main concerns are the inefficiency of the solar panels on a road (due to their position, shade and dirt), the high production and maintenance costs, and the unsuitability of tempered glass as a safe road surface (dangerous, not durable and costly to replace).

The strongest critic of the solar cycle path is Craig Morris of Renewables International, who hopes that people will quickly realise how terrible the idea is, so that the project will not be copied elsewhere.

‘I’ve been in the Netherlands, and I can tell you one thing – the roads need roofs. You should put a solar roof over a bike path, provide protection from the rain (most of the year) and the sun (a few days of a year), and actually generate a decent amount of electricity. Cyclists would not shade the panels, not as much dirt would build up on the panels if they are three metres up, and you would have a much less expensive, safer bike path underneath.’

His alternative is readily embraced by the sceptics. While it’s hard to disagree that, from an energy efficiency and economical point of view, covering cycle paths with a solar roof would probably be a better idea than a solar cycle path, Morris misses the point of the pilot: using existing infrastructure to generate energy.

Leaving aside the question whether we should build roofs over cycle paths in a country where it only rains 7% of the time (and the rain rarely comes down straight!), I can’t help but wonder how many cyclists would still be eager to come and explore Holland by bike if the whole countryside were covered by ribbons of solar roofs.


Are solar cycle paths the way forward? It’s good to explore new technology and if the solar cycle path in Krommenie contributes to the development of more efficient, durable and affordable solar panels, who could be against it? However, many people – including me – wonder whether solar cycle paths and roads are the most economically viable option. Even if every suitable road surface would be used, it still wouldn’t be enough to supply every Dutch household with electricity.

Surely we should focus on developing more efficient solar panels and place them in the best possible locations, to start with on roof tops. And if all our roof tops aren’t enough, shouldn’t we ask ourselves: what are we doing wrong?

One thing is clear: solar cycle paths are of no benefit to the people for whom the cycle paths are intended. Some cyclists worry that the investment in solar cycle paths will come out of the budget for cycle paths and have a negative effect on cycling infrastructure in Holland. That should never be the outcome of a project aimed at more sustainability. After all, cycling is the most energy-efficient mode of transport!