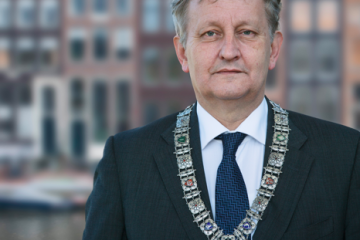 A week and a half from now, on November 2, it will be 10 years to the day since film maker and television presenter Theo van Gogh was murdered.

Much has happened in Amsterdam since that sad event but lately it seems as if we’ve come full circle. Tensions in the city are growing and radicalisation has become much more visible because of the recent conflicts in the Middle East.

Fortunately Amsterdammers aren’t the sort to get worked up very easily. Research carried out recently showed that the number of locals who say they have experienced tensions in relation to people from a different ethnic background had only increased from 15% to 19.5%

But many people are worried, as they were 10 years ago, about the possibility of a terrorist attack. The Dutch involvement in the fight against the Islamic State makes it more probable that the Netherlands could one day become a target.

In 2012 terrorists were active in Toulouse and London and earlier this year the Jewish Museum in Brussels was the scene of a deadly attack on visitors. Last week a man was arrested in Amsterdam on suspicion of planning an attack on policemen.

We need to be alert and vigilant. The local authorities, the public prosecution office and the police have agreed on a number of measures, both visible and invisible.

More police protection of synagogues is one such measure, but there is more. Some of what we do I can’t discuss here, but the fact is that ever since Theo van Gogh was murdered Amsterdam has been combating radicalisation. Theo’s death is the very sad reason we now have a head start.

One example is the effort put in by 150 key figures, a group of dedicated young people who understand the importance of ‘winning back’ the hearts and minds of fellow Amsterdammers who have become radical.

These specially trained youngsters give out information and talk about the problem with others in their network. Sometimes they are ostracized for it, or even abused. But this doesn’t stop them. I’m proud of these courageous Amsterdammers.

In spite of all this, we must realise that a terrorist attack on Amsterdam could still happen. There is only so much preventive measures can achieve. Amsterdammers themselves must be vigilant and keep an eye out for suspicious situations and alert police and the local authorities to signs of radicalisation.

But there’s something else we must do, something that is at least as important. We must continue to live our lives as open-minded people who are interested in our fellow citizens. We must combat intolerance without becoming intolerant ourselves. It is this attitude that has made Amsterdam the wonderful city it is and we must never let that go. If we do, the extremists win and we lose.

This article appeared earlier in Metro.