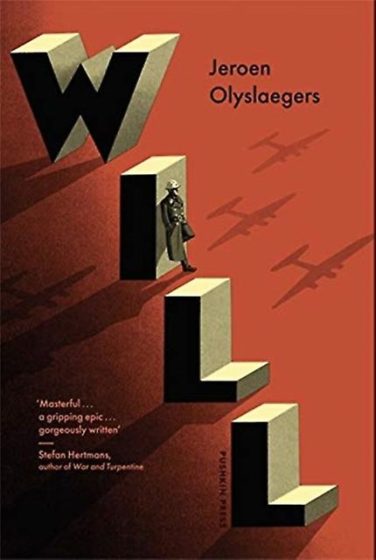 Considering its impact on history and the scar it left on humanity, it is unsurprising that so many books have been written about World War II and its aftermath. This time, we are focusing on a book about the Belgian experience, which is very relevant to the Netherlands as well.

Many war books focus on the heroic acts of brave resistance fighters, or the horrors and torment of victims. But few dive into the day-to-day lives of those neither hero nor victim and the complicated moral and ethnic dilemmas they faced simply by existing. That is what Jeroen Olyslaegers’ Will (Wil) does.

Published in 2016, Will took home a series of awards and prizes, including the top prize of the Royal Academy of Dutch Language. The English translation, published in 2019, was similarly praised, earning positive reviews from the Guardian, the Financial Times, the Observer and the Daily Mail.

The novel focuses on Wilfried Wils, a trainee police officer in Antwerp at the outset of World War II. He aspires to be a poet, but in the meantime, needs to earn a living. He’s fairly indifferent to the city’s Jewish population, the vast majority of which had fled Germany and Poland to escape Nazi persecution. His work brings him face to face with the atrocities of the occupation: he sees German soldiers abusing a Jewish child, helps evict a Jewish family, and looks the other way as vandals paint pro-German slogans.

Will also has to navigate the world as a young man, with difficult parents, a new girlfriend and a complicated relationship with his best friend (who happens to be his girlfriend’s brother.) Life continues, even under the occupation, and while work brings him into challenging and sometimes horrific situations, the difficulties of his personal life also occupy his time and thoughts.

The book is written as a diary of sorts to his unnamed great-grandson and the readers see the present-day Will navigating his old age with the assistance of a nurse named Nicole. As we come to learn more about the narrator’s life, we also see how connected the past is to the present.

The narrator is morally ambiguous, as is the world around him. When he discovers his in-laws hiding a Jewish neighbor, he is annoyed at the added burden of helping to care for the man, who is only being saved because he is wealthy and it is financially beneficial for his rescuers.

It is reflective of what we know to be true about these moments in history: human beings are complicated and people cannot be separated into neat groups of ‘good’ and ‘evil.’

The near stream of consciousness style and frequent switching of perspective, from past to present, creates an unsteady atmosphere. The novel unsettles the reader, reflecting the bewildering situations in which Will himself is placed. He struggles throughout the book with the confusion and deception around him, unable to see the consequences of any choice he makes because everything is so murky and unstable.

Will is the third book from Olyslaegers in a series of four, all with titles beginning with the letter W: Wij (2009) Winst (2012) and Wildevrouw (2020). The other three are not available in English. Will is available from the American Book Center.