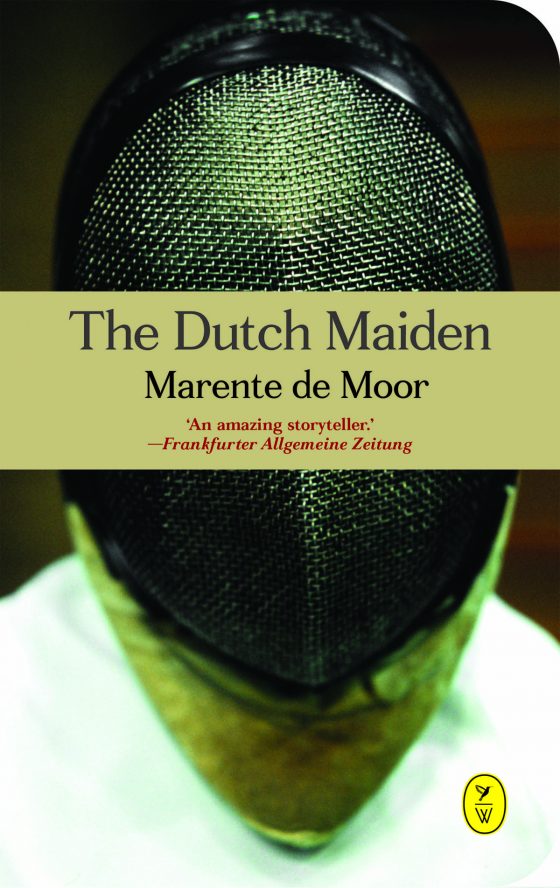 Marente De Moor, born in 1972 is the daughter of writer Margriet de Moor and visual artist Heppe de Moor. She studied literature and Slavonic languages at University of Amsterdam, and after graduation, moved to Russia for 10 years. Her work as a columnist for De Groene Amsterdammer and Vrij Nederland, has been respectively collated and published as De Peterburgse Vertellingen and Kleine Vogel, Grote Man.

Marente de Moor published her first novel, De Overtreder (translation: The Transgressor) in 2007. Her second, De Nederlandse Maagd (2010), sold over 70,000 copies and was awarded both the AKO Literatuurprijs (2011) and the EU Prize for Literature (2014). This prize winning novel, translated into English by David Doherty, was published by World Editions earlier in 2016 under the title The Dutch Maiden.

The novel’s main character is Janna, an 18-year-old fencer, is sent from her home in Maastricht to the German town of Aachen, where she stays with Egon van Bötticher, a German aristocrat and fencing master, her father befriended during the first World War. Janna arrives in Germany in the summer of 1936, a period of disquietude with unresolved grievances leftover from WWI, and the laying of early groundwork for the political climate that would give birth to WWII.

Numerous themes and storylines run through the novel and overlap in the lives of the main characters. Egon was rescued the Dutch soldiers during WWI and taken to a Dutch hospital to recover and be observed by Janna’s father, a doctor with a keen interest in medical science. This relationship does not sprout the roots of a friendship, yet the reason the men remain connected to one another two decades on, is one of the conundrums running through the narrative.

Janna’s relationship with Egon, a disfigured older man who seems to prefer animals to humans, is also bewildering. Attraction to Egon, especially as Jana is in the constant company of the prepossessing identical twins, Fredreich and Siegbert, who are also her peers and fencing partners seems unlikely and is only barely explained by the author.

In the larger picture, the narrative exposes the German negative attitude to the Dutch in comments made about Janna and her father. Friction within Germany is highlighted by the presence of Nazi-supported Heinz and some members of the Mensur congregation who gather at Egon’s estate to indulge in this forbidden fencing tradition that seeks to inflict physical injuries to evince courage.

The Dutch Maiden has beautifully constructed chapters, which have been preserved in translation. The narrative promises to take the reader on a journey that will uncover and explain the characters and the reasons they do what they do.  These promises are quietly kept, and although this may disappoint some readers, it seems to be almost idiosyncratic trait of many esteemed Dutch authors. An interesting, recommended read.