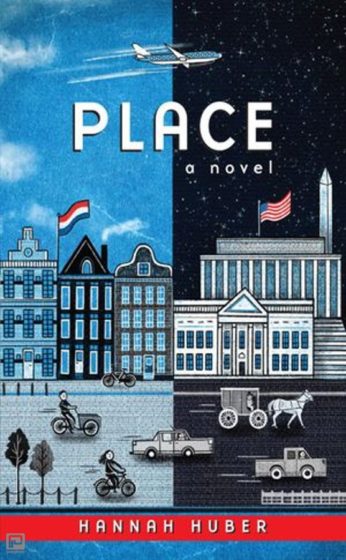 Place follows the story of American Jill Stone, a journalist married to a Dutchman, who has spent her entire working life in the Netherlands. Following their daughter’s graduation from high school, the family has decided to relocate to the United States to be closer to Jill’s family.

Just as they are hosting their goodbye party, Jill gets offered her dream job but the position would require her to stay. Unsure of what to do, Place explores what it’s like to have a foot in two worlds.

The book is the debut novel of Hannah Huber, who like her main character, is an American married to a Dutchman living outside Amsterdam. What Huber sets out to showcase is how difficult it can be to fit in and when answering the question ‘Where are you from?’ becomes impossibly complicated.

Obviously drawing from some of her own experiences, Huber does a good job wrestling with the challenges of life as an international. Many Dutch News readers will see the struggles of their own lives echoed in the work.

As Place’s main character sees the Netherlands through the eyes of a long-term ‘foreigner,’ the reader gets a look at Dutch life beyond windmills, bikes and cheese.

The protagonist describes her daughter’s school selection process, defines TBS (psychiatric prison or treatment for criminals said to have mental issues) and intermingles plenty of the Dutch language, all of which is helpfully translated in the text. The work describes the Netherlands that those who lived here for a while would be familiar with. It’s rare to see such a close-up look at such a niche perspective.

While the debate about whether to stay or whether to go is a sufficiently large conundrum, the protagonist also experiences a series of soap opera-worthy events, including an accident leaving Stone’s husband in a coma and some marital infidelity.

These issues aren’t as dealt with as deftly as the ones surrounding Stone’s identity and feel slightly contrived, as though they were included merely to move the plot forward rather than to explore the characters further.

An online platform that helps internationals integrate, Amsterdam Academy, published the book. The organization was established by Huber, making the novel essentially self-published. Fortunately, Place is not the victim of issues that plague many self-published works. It has been thoroughly edited, the characters have clear and distinct personalities and even the cover art is well-done.

Overall, Place is a well-done look at the struggles of someone who has their identity split across borders. You can pick up your copy at the American Book Center.