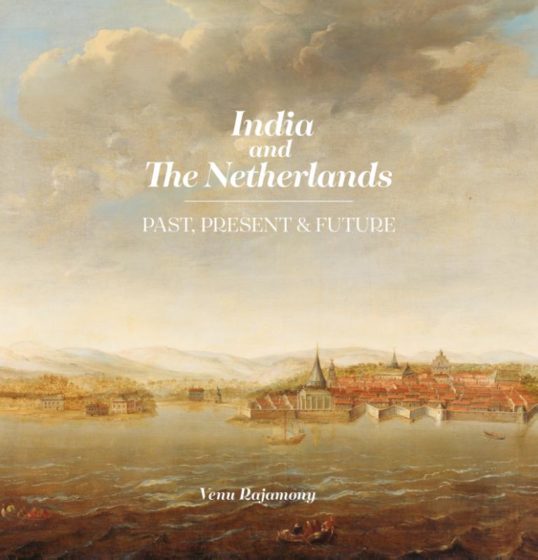 Venu Rajamony, the Indian ambassador to the Netherlands has produced a colossal coffee table book in India and the Netherlands – Past, Present and Future. It is a lavishly illustrated encyclopedia of the cross-cultural legacy between the two countries, highlighting their economic and cultural ties – right down to yoga and museum treasures.

In his introduction, the ambassador says that the book has been inspired by his two years of living in the Netherlands ‘and the desire to shed light on the unknown, forgotten aspects of the Netherlands – India interface’.

‘Researching and bringing together the contents of this book,’ he says, ‘has been a joy – a delightful process of discovery and wonderment.’

Did you know, for example, that Rembrandt had Mughal minatures and created 25 drawings inspired by them, several of which are reproduced in the book? Or that the Dutch chintz still used in the traditional costumes of Hindeloopen was first exported to the Netherlands from India 400 years ago?

According to the book, the first Indian to settle in the Netherlands is likely to have been Gerrit Mosopatam, who is believed to have made the journey with Philip Baldaeus in 1666 – he is portrayed in the Rijksmuseum, in Indian clothing and a turban.

Other notable visitors come under the spotlight, including philosopher and monk swami Vivekananda who came in 1896 and commented on the ‘strange appearance of the Dutch cities with canals instead of streets’. Poet Rabindranath Tagore, the first Asian to win the Nobel prize for literature, visited in 1920 and, the ambassador writes, his mainly female audience was ‘utterly spellbound’ by his readings.

Moving into more modern times, the ambassador writes about how Indian diplomacy helped keep cruise missiles out of the Netherlands, and the economic ties between the two countries. It also has plenty of coverage of recent royal and diplomatic visits and celebrations of significant events.

This is not a book to read cover to cover, but one to dip into from time to time and come up with an interesting nugget of information. It will be of particular interest to the growing Indian community in the Netherlands who may not be aware that the two countries have been intertwined for quite so long.