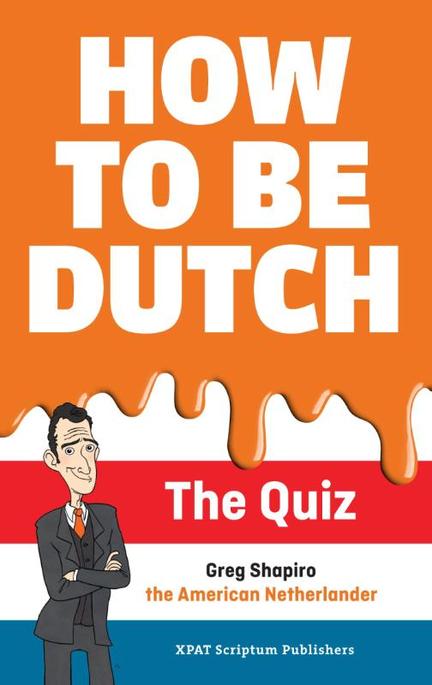 A familiar face to many expats in the Netherlands, Greg Shapiro is an American comedian, writer, television presenter, vlogger and collector of Dutch peculiarities. As a resident of the Netherlands for over two decades, Shapiro has had ample opportunities to expand his collection of cultural idiosyncrasies, considered ‘normal’ by the Dutch and ‘absurd’ by everyone else. It is these cultural oddities that form the foundation for Shapiro’s professional life.

How to Be Dutch, The Quiz is Shapiro’s latest book. It follows his 2014 book: How to be Orange: an Alternative Dutch Assimilation Course which tied in with the live show Shapiro was performing around the country at the time. His new book is written as a quiz loosely based on the Dutch assimilation or inburgering exam.

The quiz contains multiple-choice questions arranged under topics including Dutch fashion, cuisine, stereotypes, and health care. Selecting the correct answer is often difficult because all options can seem ridiculous yet totally plausible. A good example is:

While biking, you see a group of tourists edging toward the bike path ahead of you. When should you ring your bell?

Edgy at times as questions touch on such sacred cows as Zwarte Piet, slavery and racism, Shapiro provides readers with the arguments and relevant history needed to gain insight into the Dutch culture. He doesn’t shy away from complaining, appearing foolish, or exposing the nonsensical. His comparisons are influenced by his own American background, a familiar standpoint for non-Americans thanks to decades of television and films.

How to Be Dutch: The Quiz is not an anti-Dutch book. Instead it is an amusing look at the country and culture many migrants have chosen to be part of, whether on a temporary or permanent basis. Recommended for anyone looking for a fun, easy read or wanting to assess their own assimilation into the Dutch culture.

(The correct answer is C)