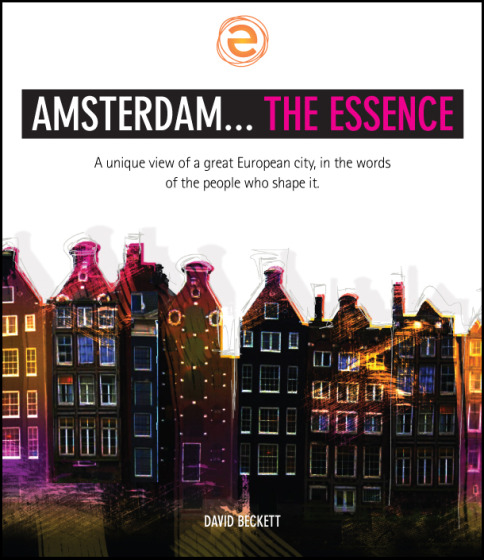 Glorious architecture, picturesque canals, a paradise for art and culture buffs, and possibly the most eclectic bunch of Europeans you’re likely to meet. That sums up Amsterdam for me.

I once saw Mini-Me’s twin wearing a bright yellow Panama hat smoking a big fat Cuban cigar while riding nonchalantly around Dam Square on a monkey bike and thought I was hallucinating – except I was stone cold sober. No one else seemed to bat an eyelid…

So I was intrigued to read British writer David Beckett’s Amsterdam… The Essence because it proffers: ‘A unique view of a great European city, in the words of the people who shape it.’ And that surely had to include a host of colourful characters?

People like tattooist to the Red Hot Chili Peppers (a.k.a. Hanky Panky), a former sex worker turned campaigner, ex-Mayor Job Cohen and a plethora of wacky types (and some downright pretentious ones) are interviewed at length to offer a fascinating insight into what makes Amsterdam such a funky place to live and visit.

Beckett has lived in Amsterdam since 1998 and was inspired to write something exciting about the place he describes as: ‘the most enigmatic city in the world,’ which is a bold statement indeed.

But after reading his book it’s hard to refute, especially if you’re familiar with this wonderful little city that has a population of well under a million people, and yet consistently makes it into the top ten list of places to live in Europe.

There are also some gorgeous black and white photographs of the city that if like me, you no longer live anywhere near Amsterdam, will make you wistful to return.