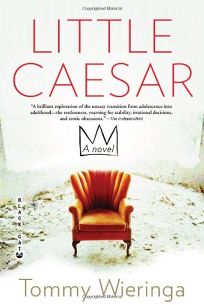 Tommy Wieringa is one of the leading lights of modern Dutch literature and several of his novels have been translated into English. In Little Caesar, first published in 2009, he takes his central character on an odyssey in search of answers about his dysfunctional family and the legacy it left behind.

Ludwig Unter, the child of artists, is born to a Austrian father and a Dutch mother in Alexandria, Egypt. His nickname is Caesarion, or little Caesar, the name of the child born to Julius Caesar and Cleopatra. His father leaves the family when Unter is young and eventually he and his mother move to live with relatives in the Dutch countryside, before his mother moves them to a house on a cliff in England, which eventually falls into the sea.

Tommy Wieringa was born to Dutch parents in Aruba, where he lived until he was nine before moving to the east of the Netherlands.  He shot to fame after the publication of his novel, Joe Speedboat, in 2005 which won a raft of prizes, including the Ferdinand Bordewijk Prize. He followed up Joe Speedboat with a collection of travel logs and then travel stories in 2005 and 2006 before publishing Caesarion in 2009.

While Joe Speedboat follows a disabled young narrator whose whole life is before him, Wieringa’s follow up is much more backward looking and much darker. But the narrator does little to examine his life, but rather slumps through, simultaneously hating and yearning for his absent father and obsessing over, while also hating, his mother.

His mother’s death becomes a metaphor for Unter’s life. She refuses treatment until it is too late, instead insisting on herbal remedies due to some vague distrust of the medical profession. She dies a slow, painful and demanding death. Unter, likewise, is suspicious of the world, but refuses to address, or even examine, his motivations.

The book was translated by Sam Garrett, an American by birth who has lived in Amsterdam for nearly 40 years and is behind the English language versions of several Dutch classics.

It is worth noting that there are are two English-language editions. The first, titled Caesarion, was published in 2011 and a second edition, called Little Caesar, in 2012.