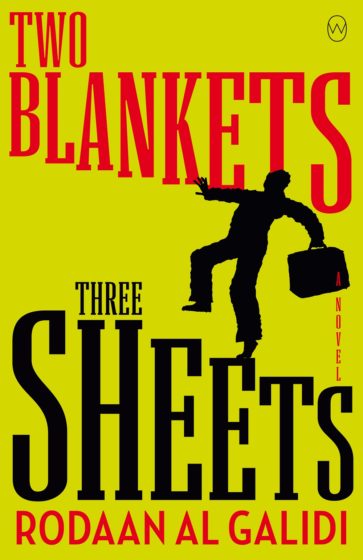 Two Blankets, Three Sheets takes its title from what refugees at Dutch asylum centers are given upon arrival: two blankets, three sheets, one towel, one pillow, and one pillowcase.

The book, which is hard to put down, is the surreal story of an Iraqi man who claims asylum in the Netherlands and shows the indifference of bureaucracy and the effect that has on a human being.

The author, Rodaan Al Galidi, escaped Iraq in 1991 to avoid being conscripted into Saddam Hussein’s army during the first Iraq war. He spends part of his time roaming around the Middle East and then Asia, before arriving in the Netherlands on a fake passport after being told that claiming asylum is easy in the Dutch system.

He soon finds out that not only is this not true, but the gruelling, tedious, infantilising experience of applying for asylum nearly breaks his humanity. He will spend nine years waiting for residency.

Al Galidi says in the foreword to the book that he is not the narrator of the novel, instead comparing his work to the role of Rembrandt in the Night Watch. Rembrandt isn’t depicted in the painting, but you could imagine him there, says Al Galidi.

A best-seller in the Netherlands, Two Blankets, Three Sheets opens with the arrival of the narrator, Samir Karim, at Schiphol airport, planning to claim asylum. The reader is, from the outset, treated to a non-linear plotline with a feeling of magical realism. Upon claiming asylum, Karim describes his experience of being locked in a freezing cold cell.

But when he later tells his story to a bureaucrat, she claims that the airport has no cells. The discrepancy is never addressed and we are left to wonder who is lying.

Discrepancies such as these appear over and over in the book, leading you to wonder how reliable Karim is as a narrator. The confusion creates for the reader the atmosphere that Karim and the other asylum seekers experience for themselves: maddening disorientation.

Caught up in the system, Karim cannot leave, as his fingerprints have been taken and he cannot claim asylum in another European country. Nor can he do much to move his case forward. As they cannot work, Karim and his fellow 500-some residents at the asylum seekers centre are listless and bored during a process that takes years. By Karim’s count, eight people commit suicide while he is there.

It isn’t merely the monotony, but the, at times, cruel behavior of those employed to work with the refugees: the woman who makes asylum seekers stand in a corner, facing a well when they irritate her, the man who confiscates, without reason, the sewing machine of an older asylum seeker.

Karim turns up for an appointment with his lawyer and is told by the receptionist the lawyer wasn’t available and he’ll need to make a new appointment. Karim tells her he won’t be able to get another fare for the train, to which she replies ‘So pay for it yourself. You’ve got a free roof over your head, food and drink, and a clean toilet. Surely you can find your own way here.’

Despite his treatment, Karim retains a wry sense of humour. He retells the anecdotes of failed dates, accidents of poor translation and the variety of characters he shares a roof with. There are moments where the book is even laugh-out-loud funny, though perhaps you laugh to keep yourself from crying.

Karim does eventually get residency, though in true fashion to the book, it’s unclear to the reader how that eventually works out for the narrator. Our last contact is Karim leaving the centre and walking to the train station, wondering if the entire ordeal has left him insane.

You can buy Two Blankets, Three Sheets at the American Book Center.