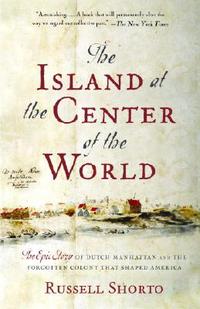 We all think we know the story of how the Dutch purchased a little island from Native Americans for 24 dollars and then traded it to the British for Suriname. But the tale is far more complicated and interesting than that. American journalist Russell Shorto gives us the full picture in his accessible and riveting book, The Island at the Center of the World.

Published in 2004, The Island at the Center of the World starts with 17th-century English seaman Henry Hudson and his quest to find the mythical northwestern passage. From there, Shorto draws you into a tale of politics, backstabbing, and a considerable number of untimely deaths. You meet Adriaen van der Donck, a young lawyer who is at odds with the director of the Dutch colony, Peter Stuyvesant. Both men will have a last impact on the island that becomes known as Manhattan.

Shorto’s central premise is that, contrary to popular belief, it was the Dutch, rather than the English, who laid the foundation for America, via their small, hardscrabble landholding known as New Netherlands.

‘Manhattan is where America began,’ he writes. Shorto argues it was the tolerant Dutch who laid the groundwork for immigrant culture, creating the first melting pot of free trade, acceptance, and a society where dozens of languages were spoken

It isn’t just the unearthed history that makes The Island at the Center of the World so compelling. Short’s writing style, turning centuries-old history into a narrative thriller, makes the book hard to put down. He brings wit and humor to a subject often relegated to dull high school history classes and it is clear that his research is thorough.

We are not the only ones who loved Shorto’s book. He’s credited for generating a new awareness of the Dutch role in U.S. history and a reappraisal from historians as to how the Dutch colony shaped it. The New York Times choose The Island at the Center of the World as its 2004 Notable Book and the New York Public Library picked it as one of its 25 outstanding books for the year. The Guardian called it ‘narratively irresistible,’ the Chicago Tribune said it was ‘literary alchemy’ and, most importantly, it also makes the American Book Center’s list of favorites.

Shorto relied heavily on archives translated by Charles T. Gehring, a historian and translator who took on the monumental task of translating some 12,000 pages of 17th-century records owned by the New York State Library. Those journals, court documents, and wills were the basis for The New Netherland Institute, a non-profit set up to support their translation and provide the foundation for The Island at the Center of the World.

The book was an immense success for Shorto, who would go on to serve as the director of the John Adams Institute and receive a Dutch knighthood for his work elevating Dutch history. He’s since published several other books of history and his most recent work is Smalltime, which tells the story of his family’s involvement with the mob.

You can buy The Island at the Center of the World at the American Book Center.