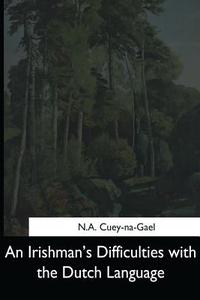 It was written more than 100 years ago, but the struggles faced by the protagonist in An Irishman’s Difficulties with the Dutch Language will still be very relatable to those learning Dutch today.

The short book, only 134 pages, recounts the experience of Jack O’Neill, an Irish student at Trinity College Dublin, who has moved to the Netherlands to learn the Dutch language. First published in 1908 under the pen name Cuey-na-Gael, the book was in fact written by Rev Dr John Irwin Brown, an Anglo-Irish preacher at the Scottish Church in Rotterdam.

O’Neill’s tale begins in Dublin, where he’s gathered with friends in his student accommodation when the conversation turns to his recent trip across the Channel. According to the unnamed narrator, O’Neill, needing a break from his pursuit of a mathematics degree, takes a long summer holiday to the Netherlands to master the Dutch language and acquaint himself with Dutch literature.

Only a few pages into the story two things become clear: Brown/O’Neill thinks the pun is the greatest form of humour and the Dutch language the book references is wildly out of date. Not even fifteen pages into the book, O’Neill is worried someone who is offering him breakfast is trying to bite him. (Ontbijt is the Dutch word for breakfast.)

Regardless, the story is a delight. O’Neill is a bumbling idiot, his overconfidence in his language abilities frequently landing him in trouble. Any Dutch-language learner will feel better about their mistakes after reading about his frequent and ridiculous errors.

Most of the book’s humour is found in the language mistakes, so to truly appreciate the book, some understanding of Dutch is needed. That being said, as it was written before the First World War, the Dutch is incredibly old-fashioned and required some outside translation assistance to understand.

It’s an enjoyable read and an interesting historical look at the Netherlands through the eyes of an outsider. Even in 1908, English was widely spoken in O’Neill’s experience. Fortunately for those who enjoy the work, there is a sequel, The Further Adventures of O’Neill in Holland, and Brown also penned another work about Irish humor.

Despite its age, the novel is still in print. Though we found our copy at a free little library in Amsterdam, you can find yours at the American Book Center.