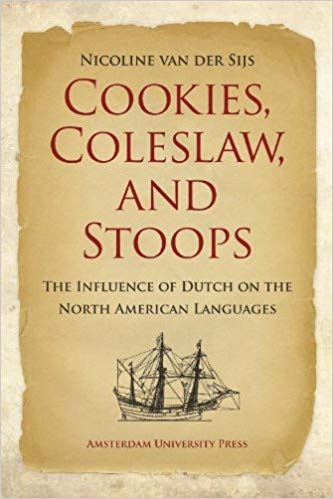 We’ve all heard that the words cookie and coleslaw originated in Dutch. But did you know brewery and pinky are also of Dutch origin? And both Broadway and Wall Street owe their names to the Dutch as well?

In her book Cookies, Coleslaw, and Stoops: The Influence of Dutch on the North American Languages, Nicoline van der Sijs,  professor of historical Dutch linguistics at Radboud University, examines the impact that Dutch people and the Dutch language have had on the language of the United States and Canada.

In essence, the book is etymological dictionary of Dutch loanwords into English, as well as some Native American languages. Around a third of its pages are dedicated to lists of various words, their definitions, and their origins. Divided into three chapters, only the first is not primarily composed of word lists.

The main section, loan words from Dutch into English, is subdivided into several similar groups of words (Food, Drink, and Stimulants; Money and Units of Measure.) The list is exhaustive and includes words and phrases that will be familiar to the North American ear (e.g. poppycock and filibuster) as well as less widely used terms (e.g. overslaugh, to pass someone over) which might be regional, old-fashioned or simply less popular.

Van der Sijs also includes a list of Dutch words that migrated into Native American languages as well. Lezen (to read) became leówu in Mahican and pampier (the 17th-century spelling of papier or paper) became pámpil in Munsee Delaware. Although the Dutch and native populations would have, of course, had contact, little is known about the depth of their interactions, but the loanwords demonstrate some tribes must have had sustained relationships with the Dutch.

There is further a section of geographical words which have been borrowed from Dutch. The New York City neighborhood of Harlem (from Haarlem) is widely known, but the Dutch impact was felt beyond New York. Holland, Michigan; Amsterdam, Saskatchewan; Delft, Minnesota and many others were named after their inhabitants’ cities of origin.

The first chapter of the book focuses on the history, from Henry Hudson’s arrival in North America in 1609 through the last Dutch-language services in churches in the 1960s. Even if your idea of a good time isn’t reading word lists, the thirty or so pages of history are fascinating for anyone with a connection to both places.

Ultimately, the book is an academic work, hence the substantial price tag (€60) and the often dry prose. The layout and the design also lack the pizzaz of a more generally aimed work. It’s a great comprehensive guide for anyone with an interest in linguistics but not much of a pleasure read.

Cookies, Coleslaw, and Stoops is available from the American Book Center.