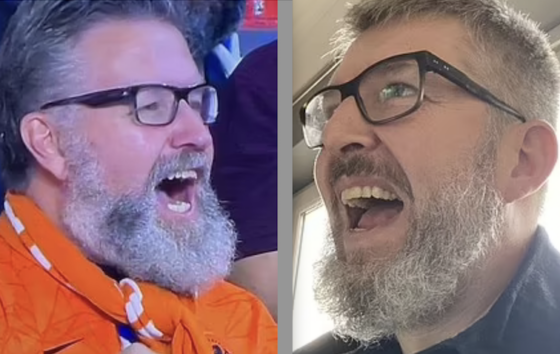 An Oranje fan who was spotted in the crowd at the World Cup in Qatar by his English doppelganger is Dutch football fanatic Henk van Beek.

Van Beek is back home in Uithoorn after cheering on his country in their 3-1 win against the US on Saturday.

The 52-year-old hit the headlines in the Netherlands for following the Dutch national team in an orange-painted, English double decker bus, which he fills with fans – and which is currently in Qatar.

His lookalike, Steve Hunt, from Norwich, told the British press he had been inundated with phone calls from friends and family who wanted to know what he was doing in Qatar.

‘I had to pinch myself. I was looking at myself on the screen in the crowd in Qatar and thinking “But I’m here, I’m not in Qatar”,’ he said. ‘I was thinking there must be a parallel universe, and that time portals had crossed over and that I was in two places at the same time.’

Even his mother called, saying she didn’t know that her son even liked football, let alone that he was supporting the Dutch, not England.

Henk has been following Oranje since he was 17 and has travelled the world to go to games.

He told Dutch News that he has been given his doppelganger’s phone number and plans to get in touch. At the moment, however, he is trying to recover from the ‘Qatar cold’ which, like several of the Dutch players, he says he picked up from the air conditioning.