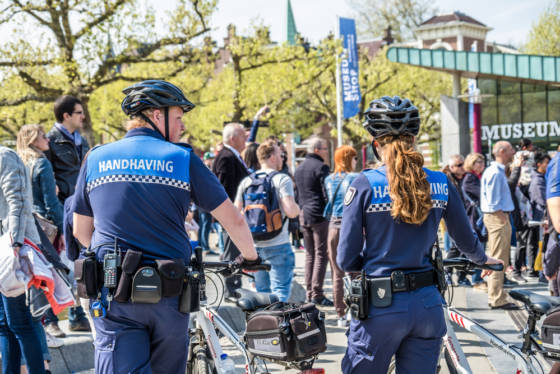 Amsterdam plans to ask for official government permission to equip some of city centre council wardens with small truncheons as a defensive weapon, the Parool reported on Tuesday.

The move, mayor Femke Halsema and finance chief Hester van Buren said, will allow the wardens to feel safer and better able to defend themselves in dangerous situations.

The measure will only apply to city centre wardens because they have to deal with more aggressive situations, the council officials said.

Truncheons will not become part of wardens’ kit until towards the end of next year, when they have undergone training to use them properly. After two years, the use of the truncheons will be formally evaluated.

So far this year council wardens, known as boas in Dutch, have reported 222 incidences of violence and aggression in the city centre. That is almost on a par with the 259 instances registered in the other six boroughs altogether.

Last year, 20 Amsterdam wardens took part in a pilot project to test the success of the truncheons. They drew their weapons a total of 40 times and used them 16 times. In two cases, regulators ruled their use had been disproportionate.

The plan to introduce truncheons in Amsterdam has not yet been debated by city councillors and two of the three coalition parties have their doubts about the plan.