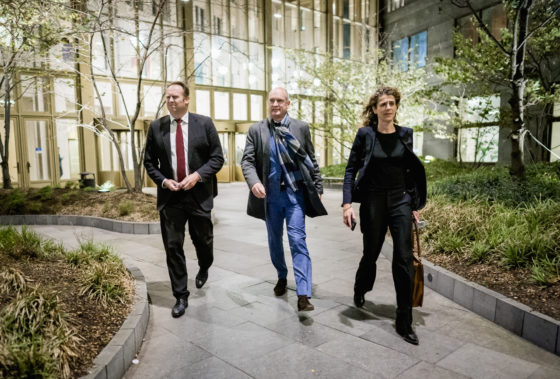 All four coalition parties are set to back a law giving the government more powers to manage the accommodation of asylum seekers, after prime minister Mark Rutte secured the support of his VVD party on Tuesday.

Rutte flew back from the COP27 climate summit in Sharm El-Sheikh to persuade his colleagues in parliament to back the measure. The VVD group had said it would only back the plan if it included measures to stop refugees crossing the border.

Parliamentary group leader Sophie Hermans said MPs had had a ‘very tough’ discussion with Rutte where they called for action to reduce the number of asylum seekers arriving in the Netherlands.

It is not clear what, if any, concessions Rutte made on behalf of the cabinet, but the VVD group is now expected to vote for a law drafted by their party colleague, asylum minister Eric van der Burg, that will give him the right to overrule local councils on accommodation.

The issue is likely to flare up again at the VVD’s autumn conference on November 19. A group called Klassiek Liberaal (‘Classic Liberal’) said it was disappointed with the outcome of the meeting: ‘This was the moment to say: we can’t accept this, enough is enough,’ NRC quoted the group as saying.

VVD alderman Paul Sletterman branded the decision a climbdown by his party’s MPs. ‘First they were against it, now they’re for it. Yet nothing has changed,’ he said.

It’s all about managing the short term, there is no vision about the deep-seated problems behind it. We can’t fix anything when the numbers coming in are so high.’

The fact that Rutte had to step in to sort out the impasse also raises questions about the position of Hermans, who has struggled to put her stamp on the role since being appointed parliamentary leader after the 2021 general election.

Asylum minister Eric van der Burg will now hope to steer the draft legislation through parliament so that it can come into force on January 1, having already missed the original deadline of October 1.

The cabinet expects another 55,000 people to claim asylum in the Netherlands next year, but only 15,000 ‘sustainable’ places have been identified so far.

Van der Burg told Nieuwsuur on Tuesday that the bill would still give municipalities flexibility to choose how to meet their obligations to house asylum seekers or work in partnership with other councils.

There will also be incentives in the form of a €2,500 a year bonus for every place that local authorities pledge to create before May 1, provided they agree to maintain it for at least five years.

The deal within the VVD could also cause friction with its coalition partners, D66 and the ChristenUnie (CU), who had already made concessions in June by agreeing to put a temporary block on allowing family members to join people who have been granted asylum but are still waiting for a house.

Jan Paternotte, leader of the D66 group in parliament, said Rutte would ‘undoubtedly’ look for concessions from his cabinet partners on the question of restricting asylum numbers further.

‘If a proposal comes before parliament, I’ll judge it then,’ Paternotte said. ‘But I’m not planning to have a conversation about it now.’

CU Gert-Jan Segers stressed that any changes to asylum border policy had to be agreed with other EU nations. ‘We have to ensure decent accommodation, a fair distribution between the member states, accommodation in the region [where asylum seekers come from] and extra money,’ he said.